Michigan Population Declines, But Not As Much as Previous Year

Michigan Population Declines, But Not As Much as Previous Year

Michigan – Michigan joined 17 other states in losing population between 2021 and 2022, according to new population estimates released by the Census Bureau.

The good news, however, is that Michigan’s population loss of 3,391 was just over 10 percent of the loss suffered in the previous year (32,073), and was the 5th smallest of the eighteen.

Population change is built upon 4 demographic factors:  Births, Deaths, Immigration, and Domestic Migration.  Let’s look at each of these factors over time in Michigan. 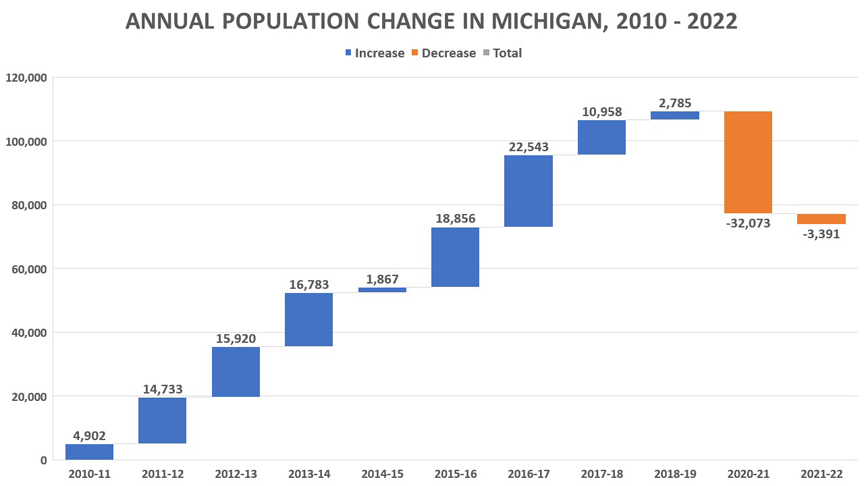 Births:  Michigan’s birth numbers had reached 70+ year lows prior to the pandemic, due to an aging population and decreasing birth rates.  This decline was further exacerbated by the pandemic.  While total births in Michigan increased by almost 2,500 between 2021 and 2022, the total of 105,157 was the second lowest since 1941.

Deaths:  An aging population has led to annual increases in death numbers since 2010.  The pandemic drove death numbers up by almost 20 percent during 2020 and 2021, resulting in more deaths than births for the first time in Michigan’s history.  The 2022 estimate was 2,619 higher than 2021 and eclipsed the increase in births.  As a result, “natural decrease” accounted for a loss of 12,482 residents.

Immigration:  The number of immigrants to Michigan between 2021 and 2022 took a huge jump over the previous year, increasing from 7,044 to 18,812!  This was close to the annual average that the state experienced last decade.

Domestic Migration:  Michigan is known as an out-migrant state because we send more residents to other states on an annual basis that we receive from them.  During the 2000–2009 period, when the economy was in trouble, we averaged an annual loss of 59,931.  This improved over the next decade as the annual loss was more than halved to 27,824.  The 2020-21 outmigration of 29,566 came as a great surprise to me and other demographers as the economy and other contributing factors had settled.  This, coupled with historically low immigration numbers, was the major driver of 2021’s population loss of 32,073.

The 2021-22 domestic outmigration total fell to a mere 8,482, by far the smallest loss in decades. This, combined with the increased immigration total, resulted in only the 3rd positive net migration total in at least 2+ decades.