Oakland County, Wayne County, MI – There are 3,143 counties in the United States, but only 47 (1.5 percent) that have populations over one million.  California accounts for 10 of the 47, followed by New York and Texas with 6 each and Florida with 5. Michigan has 2 counties on the list – Oakland (1,270,017) and Wayne (1,774,816), as do Arizona, North Carolina, Ohio and Pennsylvania.  Thirty-one states, and the District of Columbia, do not make the list.

I thought it would be interesting to look at a number of demographic variables and see how Oakland, and Wayne, measure up against their peers.

I selected the following variables:

This measure of diversity represents the share of the population that is not white, non-Hispanic.  Bronx, New York has highest share at 91.4 percent, while Allegheny, Pennsylvania has the lowest – 24.0 percent.  Wayne County ranks 32nd at 51.6 percent, while Oakland County ranks 46th at 31.2 percent.

Population Born in State of Residence

This variable is a measure of population attraction (especially at the state level), in that it looks at the share of population that was born outside of Michigan and chose Oakland or Wayne County as their current residence.  The highest share, 75.9 percent, is present in Wayne County, while Clark County, Nevada had the lowest share of 25.0 percent.  Oakland County ranked 6th at 70.7 percent.

As birth rates and population growth have slowed dramatically over recent years, the need to attract immigrants has taken on added importance.  Counties with high shares of immigrants tend to experience higher rates of population and economic growth.  Miami-Dade County, Florida ranks #1 with a foreign-born share of 53.6 percent.  Allegheny County, Pennsylvania comes in last at 6.4 percent.  Michigan’s relatively low share is reflected in the low rankings of our county representatives, as Wayne County ranks 45th at 9.6 percent and Oakland County ranks 43rd at 12.2 percent.

Educational Attainment (Persons 25 and over with a College Degree)

Whether we look at the work of Business Leaders for Michigan or the Detroit Regional Chamber, low shares of college graduates tend to be Michigan’s Achilles heel. Locally, Amazon cited the low share of college graduates in the Detroit metro area as one of the reasons they passed us over for their second headquarters location.  Fairfax County, Virginia took first place as almost two-thirds (64.9 percent) of their residents 25 years and over had at least a Bachelor’s degree.  Bronx, New York came in last at a mere 23.0 percent.  Coming back to Michigan we find Oakland County ranks 12th at 50.5 percent, while Wayne County ranks 43rd at 27.2 percent. 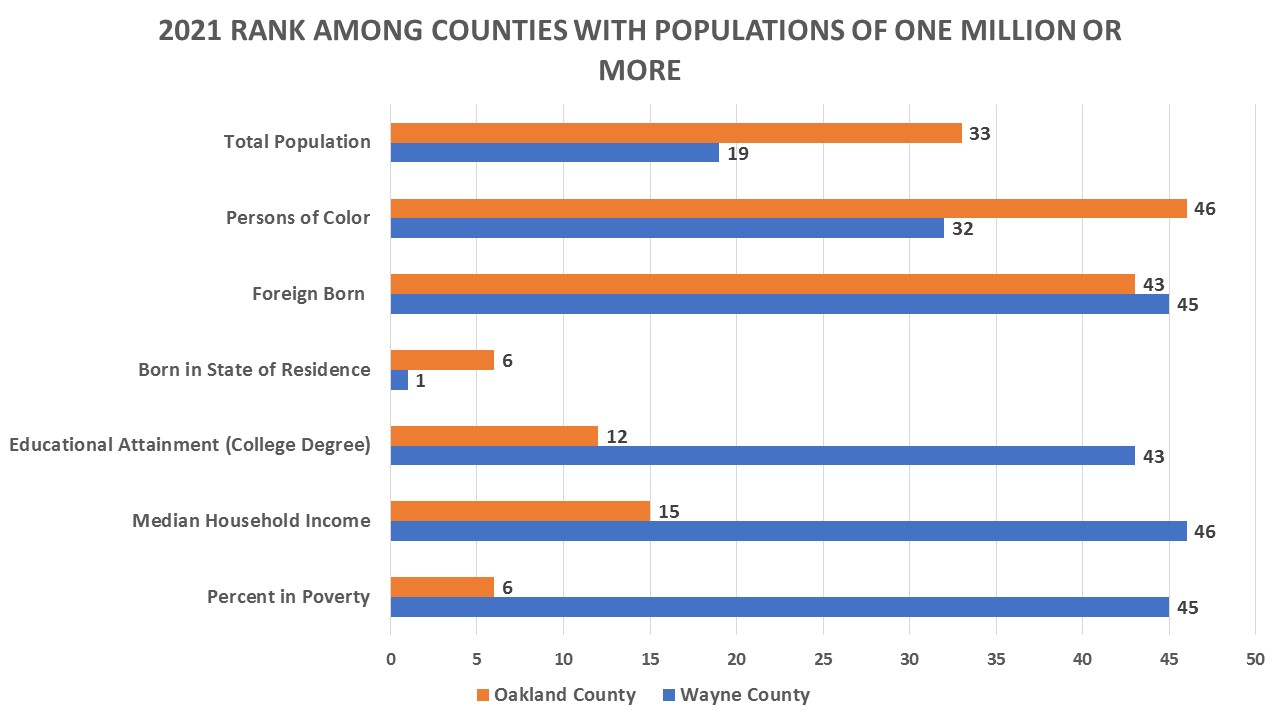 Income is closely tied to educational attainment.  Santa Clara, California rose to the top at $141,562 (Fairfax County was a close second).  As the educational data predicted, Bronx, New York came in 47th with a median household income – $43,011 – just 30 percent of Santa Clara’s.  While Oakland County’s median was $86,523, placing it in 15th place, Wayne County’s median of $52,605 beat out only the Bronx, placing it in 46th place.

The inverse of income is poverty.  In 2021, the poverty threshold for a family of four was $33,130.  Coming in 1st, with the lowest share of poverty, was Nassau County, New York at 5.8 percent.  The highest poverty rate of 26.4 percent was found in Bronx, New York.  Oakland County’s rate of 7.7 percent tied it for 6th lowest with Middlesex County, Massachusetts.  Wayne County’s rate of 19.6 percent placed it 45th, just ahead of Bronx and Philadelphia counties.

Dogs of Rochester Hills: A Look at Popular Names and Breeds
February 6, 2023

MML# 4 – Hackers Hitting Clarkston in 2018 Serves as Training Example for Other Cities
December 14, 2022
Search Our Site