Oakland County, MI – Today, December 8, the Census Bureau released its latest round of 5-year American Community Survey (ACS) data for the period 2017-2021.  The ACS is an annual survey that collects data on a wide range of subject areas, including age, race and ethnicity, educational attainment, labor force, income, poverty, housing characteristics and more. The importance of the 5-year files is that they cover all states, counties, cities, villages and townships regardless of population. [The 1-year ACS file, released earlier in the year, only covers communities with populations of 65,000 0r more].

I plan to delve into a number of these variables for Oakland County communities in the coming weeks.  Today’s analysis takes a look at ‘AGE.’  How do communities rank on their share of children (under 18 years of age) and seniors (65 years and over)?  Before we do that, however, let us look at ‘median age’ – the age at which half the community’s population is older and half is younger. 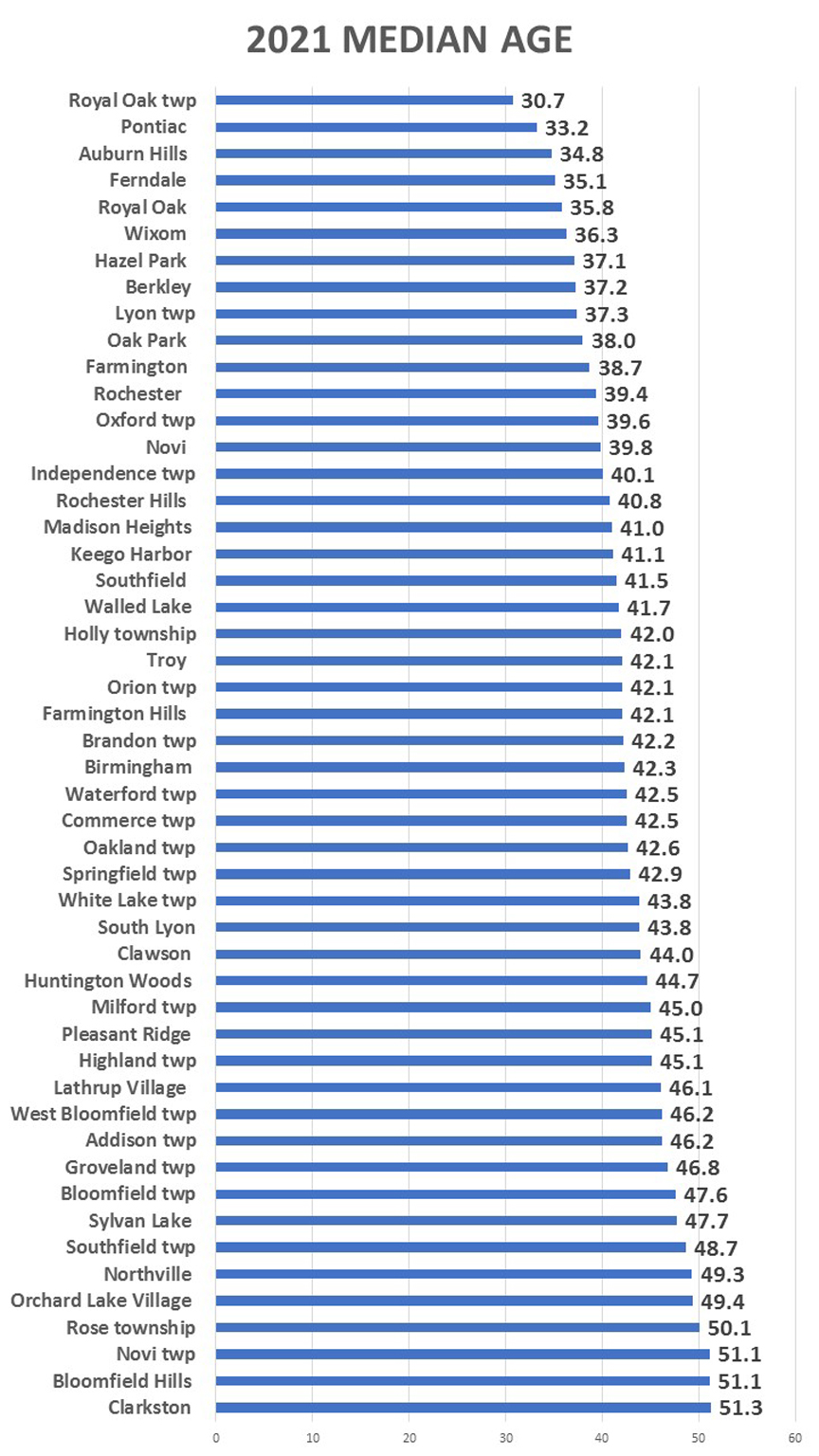 The difference between the youngest community (Royal Oak township) and oldest community (Lake Angelus) is 34.8 years – ranging from 30.7 to 65.5 years.  There are two other communities – Pontiac and Auburn Hills – with median ages below 35 years.  While no other community comes close to Lake Angelus, four communities – Rose and Novi townships, Bloomfield Hills and Clarkston – have median ages above 50.  Figure 1 shows the distribution for the 51 county subdivisions (villages will be covered at a later time.)

Figure 2 ranks the communities on their share of CHILDREN.  Once again, we see Royal Oak twp. (29.2%) and Lake Angelus (5.7%) at opposite ends of the distribution.  Five other communities – Lyon, Oakland and Oxford twps., Birmingham and Pontiac – have children representing at least a quarter of their populations.  On the other end are five communities – Ferndale, Clawson, Sylvan Lake, Auburn Hills and Lathrup Village – have children representing less than 15 percent of their populations. 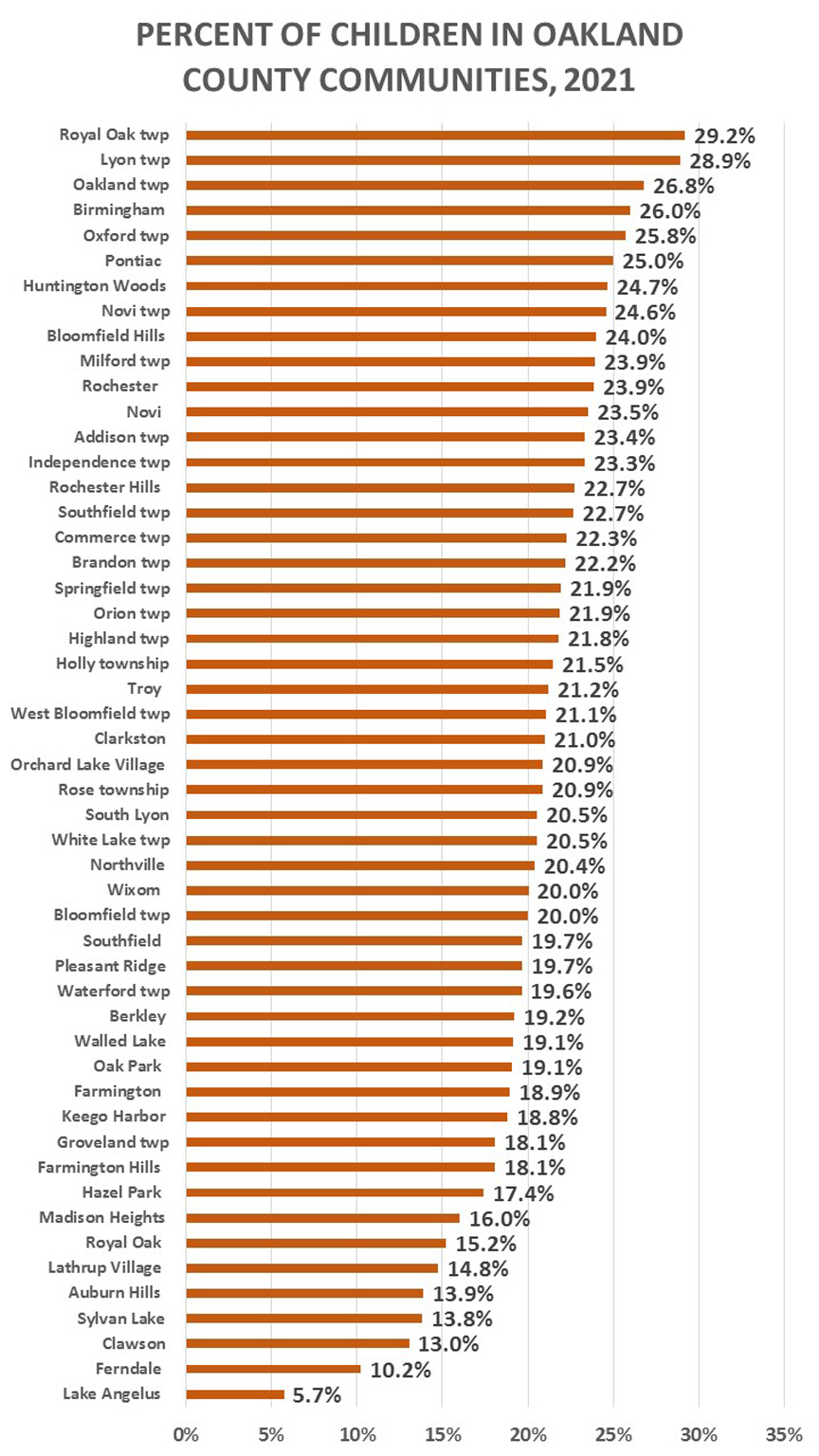 Figure 3 ranks the communities on their share of SENIORS.  Lake Angelus, at 51.6 percent, Is far and away the oldest community.  Only two other communities – Clarkston and Bloomfield twp. – exceed 30 percent.  On the low end is Ferndale, where only 9.6 percent of the population is 65 years and over.  Five communities – Lyon twp., Pontiac, Wixom, Berkley and Hazel Park = had shares below 13 percent. 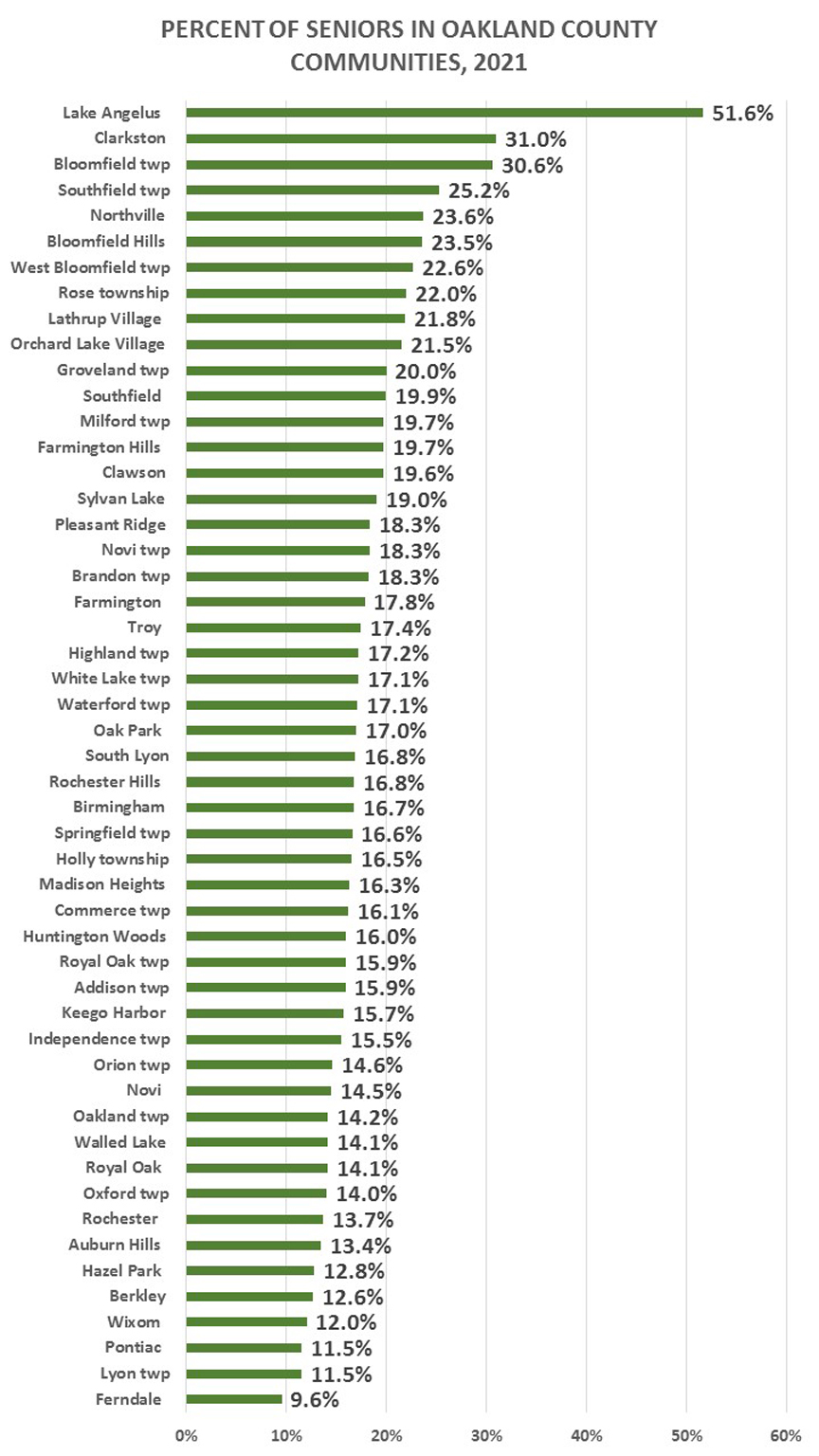 A community’s age distribution is critically important for directing government programming and expenditures, as well as driving business development.  It is clear that the variation across the county will be important to County government as it plans its investments in housing, recreation and other services.

For more stories about population shifts, voter turnout and other election trends, and other interesting numbers, visit the Data-Based Stories Archives on Oakland County Times. Thanks to Data Expert Kurt Metzger for this work!

How Oakland and Wayne Compare with Other Million+ Population Counties Across Country
December 15, 2022

MML# 4 – Hackers Hitting Clarkston in 2018 Serves as Training Example for Other Cities
December 14, 2022