Dogs of Hazel Park: A Data-Based Look at Popular Names and Breeds

Dogs of Hazel Park: A Data-Based Look at Popular Names and Breeds 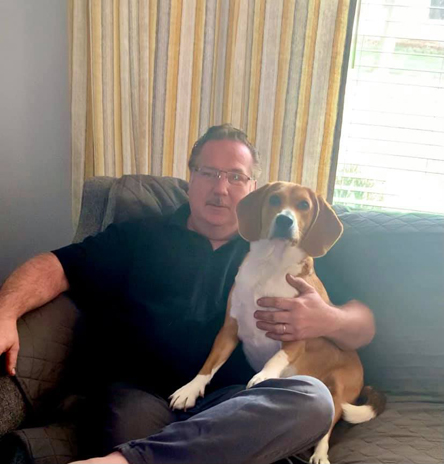 Hazel Park, MI – This chapter of my opus on “The Dogs of Oakland County” takes place in the far southeast corner of the county – Hazel Park.  This marks our first effort to go ‘off the grid’ and request license records directly from a jurisdiction that does not outsource licensing to the county.  [I have also had records delivered from Oak Park, and will be reaching out to the other communities in the days to come.]

The file I received has a total of 566 records.  Judging from community records coming from the county, such as Ferndale with over 1,400 registrations, I would have expected at least 1,000 dogs for Hazel Park.  I attribute the lower than anticipated registrations to not represent a low dog ownership rate, but rather a significant number of dog owners not taking licensing their pet.  Hazel Park is also not included in the Dog Census done by Oakland County which helps increase enforcement.

The City recently updated it’s Animal Control Ordinances in hopes of increasing licensing. City Park Councilperson Alissa Sullivan is a well-known friend to canines who often walks dogs, fosters animals, and advocates for rescue organizations. Sadly she lost her own dogs in a fire.  Yet her passion for helping other people and their pets continues.  “In the over two and a half decades I’ve lived in our city, what I’m seeing more of is people out walking and exercising their dogs. That really makes me happy for my community, my neighbors and their doggy friends. Exercised and socialized pets are safer pets, and lead to a safer community for everyone in it.

“We were lucky this year to update our Animal Control Ordinances, most of which hadn’t been updated in over 50 years. Licensing rates are up, to my knowledge, and that’s great as a license is an easy way for our Animal Patrol Officer to know there is a family looking for this displaced companion. A current license is also proof that a pet is up to date on their vaccines,” Sullivan said.  “Licenses have owner information attached that is accessible to our police department and animal control department, making for faster reunions.”

Sullivan is also proud of Animal Patrol Officer Jennifer Thomas.  “She’s done a lot for increasing return to owner, and working with rescues for placement when a reunion isn’t feasible.

“She also is a really great asset to residents who may be struggling or need a bit of assistance, education and guidance in their pet ownership. She’s really there to support keeping animals in safe, loving homes.”

The dog license database contains 566 records for dogs living in Hazel Park. While there are some interesting variations (and spellings) of breed names, I have done my best to bring some consistency across the records.  A total of 86 breeds were identified.  However, since there was no category matching the county’s ‘Mixed Breed / Mutt category,’ I have no idea how those adorable creatures of more complex lineage are classified.

It is no surprise, judging by national rankings and our first 3 communities in this series, that, once again, the Labrador Retriever is #1.  This time, however, its lead over second place is much smaller.  Coming in second, for the first time is the Pitbull, followed by the German Shepherd.  These three top breeds account for 1 of every 3 dogs registered in the city.  The only other three breeds that number 20 or more are the Chihuahua, the Boxer, and the American Bulldog.  Finishing out the Top 10 are the Shih Tzu, Husky, Beagle and Yorkshire Terrier.  While we don’t have a Mixed Breed classification, we do have some designer pairings, including the Goldendoodle, Cockapoo, Labradoodle, Malti-Poo, Shorkie, Cavashon, and Yorkie-Poo.  And if that is not enough, we have ‘designer dogs in miniature’ – Mini Goldendoodle and Mini Ausiedoodle. 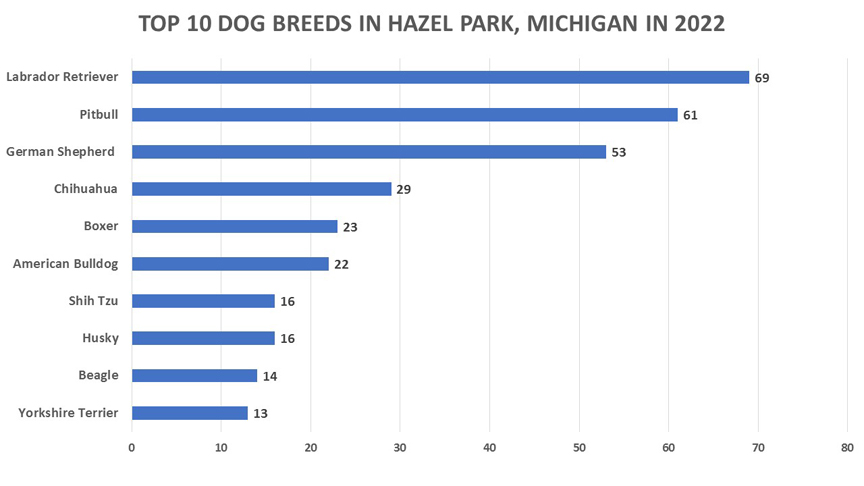 I thought that a few Westminster Dog Shows would make me an expert on breeds, but I must admit that each community I study provides another breed or two to my study list.  To our existing list of Shiba Inu, Nova Scotia Duck Tolling Retriever, Plott, Mountain Cur, Blue Heeler, Finnish Spitz, Mountain Feist, Biewer, Boykin Spaniel, Kuvasz, Lagotto Romagnolo, and Walker Hound, I am adding Dogo Argentino, Catahoula Leopard, Pharaoh Hound, and Gordon Setter.

Among the city’s terriers is Gidget, an adorable rat terrier mix who was adopted in 2020 from the Hazel Park Animal Control Shelter by Mike McFall who was a City Councilperson that has recently been elected to serve as State Representative.

“I couldn’t imagine my life without Gidget,” McFall said. “Adopting her was life changing. Gidget exudes happiness and love! When I’m having a bad day, she always knows and helps change my mood. It’s hard not to smile when she’s around.”

And perhaps Hazel Park’s most famous pooch is Cooper Webb. Webb is the shop dog at Taylor Auto and beloved pet of Mayor Mike Webb. Cooper has his own Facebook Page where he shares pictures with his 200 friends.

Every year the Social Security Administration releases a listing of the Top Names for Boys and Girls born in the previous year.  I have always enjoyed pouring over these lists to see how spellings have been altered to produce “uniqueness,” and how popular books, movies and television have spurred increases in a particular name.  I have also had many opportunities to name pets over the years and met a variety of names – many being “people names” in my walks around the neighborhood.  The listing of Hazel Park dog names has not disappointed.

Figure 2 presents the Top 7 Dog Names for the city – those being used 6 or more times.  No name reached double digits and I cut the chart off at 6 because there were six more names that all came in with 5 mentions.  While the usual cast of characters – Bella, Buddy, Charlie and Lucy – showed up, they were joined by the less seen Loki, Molly and Oliver.  Following with five mentions each are a number of our regulars – Bailey, Blue, Rosie and Zoey. 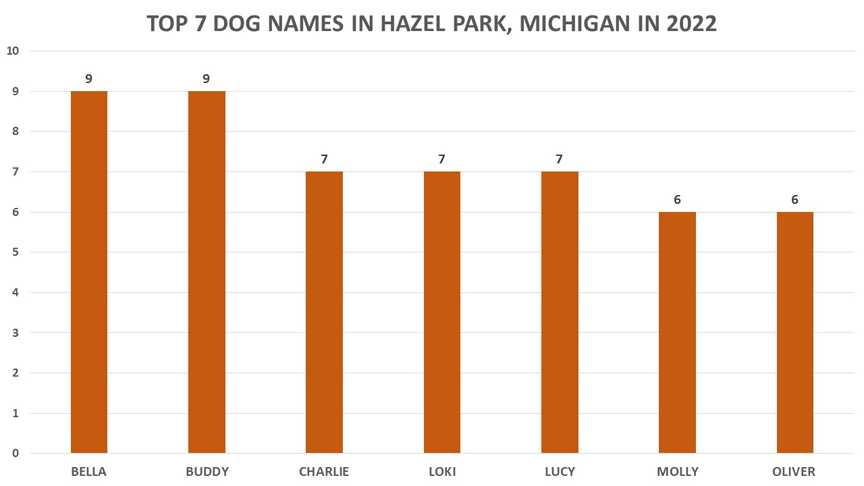 Hopefully this story can encourage people to have their pets licensed and vaccinated as well.

According to the City of Hazel Park website: “Pets over six-months of age must be licensed. No more than three dogs and/or cats may be kept in any dwelling unit. For spayed/neutered pets, a one-year tag is $8.00, a two-year tag is $12.00, and a three-year tag $16.00. For non-spayed/neutered pets, the prices are $16.00, $24.00, and $32.00, respectively. You must provide a copy of the pet’s current rabies vaccination certificate at the time of application.”

For more information visit The City of Hazel Park website.

Join in the conversation on the Oakland County Times Facebook Page, and share your puppy’s picture.  And don’t forget to get your pet their vaccinations and license, which can be done through the Oakland County Animal Shelter and Pet Adoption Center.

For more stories about population shifts, voter turnout and other election trends, and other interesting numbers, visit the Data-Based Stories Archives on Oakland County Times. Thanks to Data Expert Kurt Metzger for this work!

Dogs of Lake Orion: A Data-Based Look at Most Popular Names and Breeds
October 9, 2022