Oakland County, MI – On Nov. 8, 2022, voters approved a 10-year (beginning in 2022 and ending in 2031), .95 mill measure to maintain and expand public transit services, connecting people and communities across Oakland County.  The millage applies to all communities in the county, eliminating the previous opt-out provision which had been selected by voters in 29 of the 51 voting jurisdictions.  Approved for the ballot by the Oakland County Board of Commissioners on August 10, 2022, it stated that the millage “will support current public transportation services in Oakland County, create and extend new routes to connect local communities, and increase transportation service for seniors, veterans, and people with disabilities.”

Oakland County Executive Dave Coulter shared his happiness with the vote in a recent statement.  “I’m so grateful to the voters of Oakland County who recognized that reliable and accessible public transportation is a critical necessity in all parts of the county. The task before us now is to work with residents, businesses, organizations, local leaders and transit providers to ensure a seamless system of transportation that meets the needs of all Oakland County residents,” Coulter said.

While the transit proposal became part of the ballot as of the August vote, the campaign for its passage seemed rather quiet, overwhelmed by the statewide races for Governor, Secretary of State and Attorney General, as well as the three statewide proposals on 1) term limits and transparency, 2) increasing voting options, and 3) establishing in the constitution an individual right to reproductive freedom.  Judging from past votes and the fact that over half of the county’s jurisdictions had voted to opt-out in the past, I was predicting a rather close loss for the measure.

Boy was I wrong!  Almost 3 out of 5 Oakland County voters approved the proposal, with 57.1% voting yes on the measure.

All the current opt-in communities voted for the measure, with six of them (Huntington Woods (82.3%), Royal Oak twp., Ferndale, Pleasant Ridge, Oak Park and Pontiac) coming in at over 75 percent.  At the lower end of those that said yes were Walled Lake (56.0%) and Troy (56.9%).

The big question leading to the November 8 election was how voters in the opt-out communities would behave, and would their No votes be enough to swing the overall vote.

Turns out that voters in 10 of the 29 opt-out communities approved the millage (See Figure). 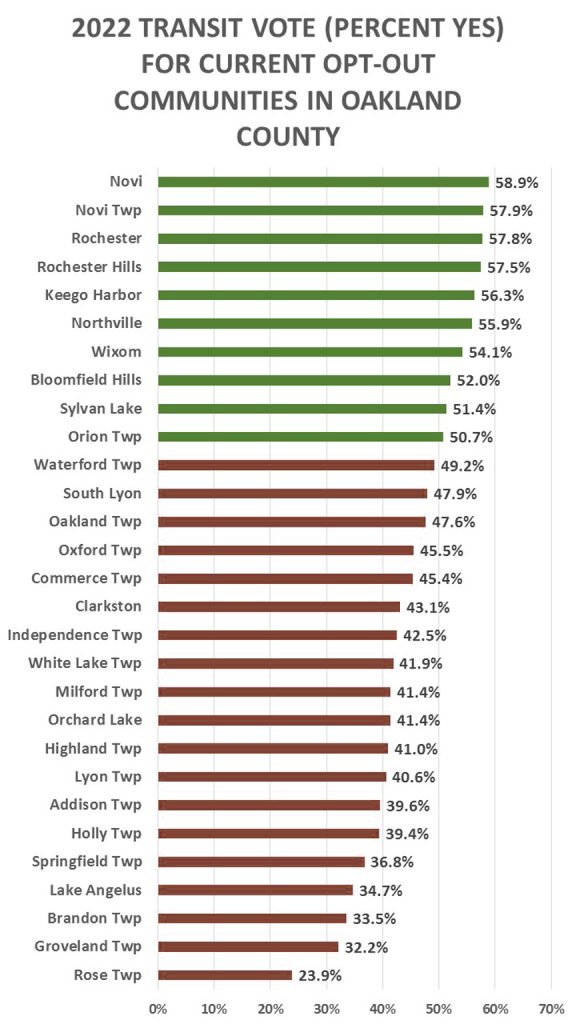 In addition to the transit millage passing in Oakland County, similar measures were also passed in Macomb and Wayne.  Younger voters (between 18 and 30) showed up at the polls in relatively large numbers across the country.  In addition to supporting reproductive rights and democratic principles, those in metro Detroit stated that they want transportation alternatives.

We have heard for years that business location decisions are built around finding an educated and skilled workforce, high performing schools at all levels, and regional transportation. Efforts have been underway in education and workforce training, and there is hope that increasing transit availability will mean connecting those looking for work with employers who have been struggling to find help.

According to the Oakland County website’s transit page “The county is committed to making sure that the Oakland Transportation millage will be fully transparent and annually audited with public meetings and oversight by the Board of Commissioners and County Executive.”

To keep up to date with transit meetings and updates visit https://www.oakgov.com/OaklandTransit/Pages/default.aspx.

MML#2 – Housing can be Lifelong Challenge for People with Criminal Records
October 27, 2022
Search Our Site