Updated Stats are a Good Reminder to Return Absentee Ballots

Updated Stats are a Good Reminder to Return Absentee Ballots

Oakland County, MI – My last article on Absentee Ballots examined the share of registered voters who had requested an absentee ballot across all Oakland County voting jurisdictions as of October 10.  This article, while providing a brief update on requests, is focused on the share of ballots returned.

While it is possible that one might change their mind and decide to vote in person, it is more likely that the absentee envelope and materials were put aside with a plan to sit down with it after studying the candidates and the proposals. Hopefully other mail has not covered it up in the meantime.  As I write this, we are only 8 days away from November 8.  So, if you know that ballot is around somewhere, here’s a reminder to find it, fill it out (all races and proposals – front and back) and drop it off.

The Michigan Secretary of State has now updated that file with the number of registered voters who have requested absentee ballots and the number of ballots returned as of October 24 – just two weeks before election day.  Along with the file is a statement – ”Voters who already have an absentee ballot should hand-deliver it as soon as possible to their clerk’s office or ballot drop box to avoid postal delays.” 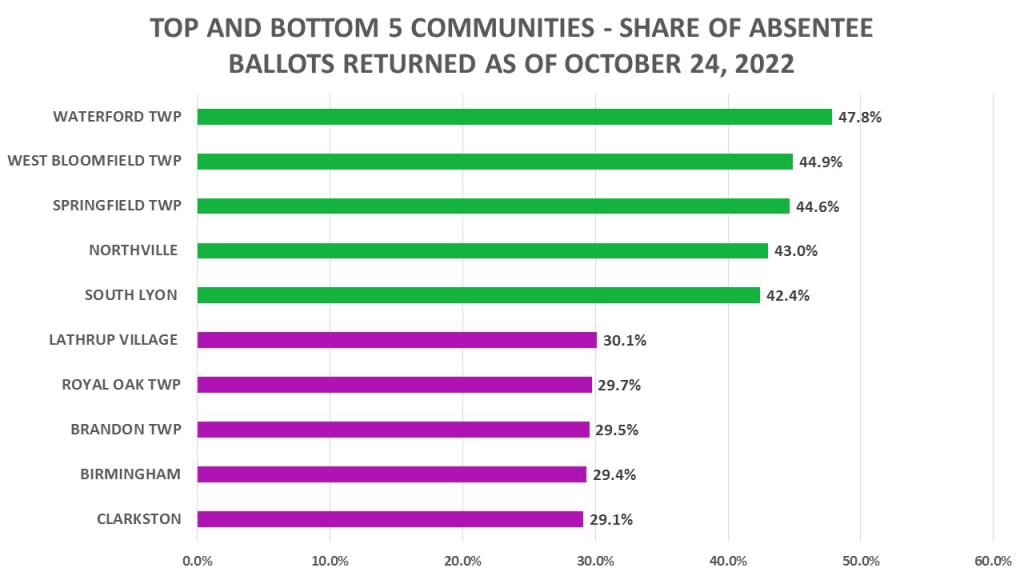 Update:  All communities showed increases in the number of applications received and the number of ballots returned.  The vast majority of communities had increases between 10 and 20 percent in absentee requests between October 10th and 24th.  In spite of these increases, those lowest as of October 10 remained in place by October 24th, with 4 communities – Pontiac, Hazel Park, Royal Oak Township and Keego Harbor still coming in at less than 20 percent.

Response Rates: Only 38.4 percent of the absentee ballots sent to registered voters in Oakland County had been returned by October 24.  That constitutes a total of 176,359 voters, with absentee ballots, who have yet to be heard.  The range across communities is from a low of 29.1 percent in Clarkston to a high of 47.8 percent in Waterford Township.  No community reached the 50 percent threshold.

Figure 1 combines the Top 5 and Bottom 5.  The Top 5 starts with three townships, all over 44.5 percent, followed by the cities of Northville, which had by far the highest share of requests, and South Lyon.  The Bottom 5 contained the reverse – 2 townships and 3 cities.  All three cities were somewhat surprising – Clarkston, Birmingham and Lathrup Village.

If you plan to vote in person – Get there early before the day gets away from you.

If you have that absentee ballot in your house, completed – Take it to your community’s Dropbox or Clerk’s Office as soon as you can.

Whatever your preference, PLEASE VOTE!

Oakland County Times invites candidates for office to film a video interview. Check out candidate interviews at https://oaklandcounty115.com/2022/06/03/2022-candidate-interviews-and-election-information/. The series is sponsored by the Pontiac Community Foundation.

For more stories about voter turnout and other interesting numbers, visit the Data-Based Stories Archives on Oakland County Times. Thanks to Data Expert Kurt Metzger for this work!

MML#2 – Housing can be Lifelong Challenge for People with Criminal Records
October 27, 2022
Search Our Site