Absentee Ballots: Communities with the Highest and Lowest Requests So Far

Absentee Ballots: Communities with the Highest and Lowest Requests So Far

Oakland County, MI – In 2018, Michigan voters approved a wide-ranging constitutional amendment that allows people to register and vote on the day on an election, request absentee ballots without having to give a reason and cast straight-ticket ballots. Little did we know at the time that this amendment would be of great use in 2020 when we were a little more than 6 months into the COVID pandemic of 2020.  For the first time in my voting career I was relieved to be able request an absentee ballot, and have continued to do so through the just completed August Primary.

The Michigan Secretary of State just released a file that provides data by community on the number of registered voters who have requested absentee ballots and the number of ballots returned as of October 10.  I wanted to see how Oakland County voters are approaching absentee voting by calculating the share of registered voters (I used the registered voter counts produced for the August primary) who have requested absentee votes by community.  It is my contention that the higher the share of voters requesting absentee ballots, the higher will be the final voter turnout. [While the correlation is deemed moderate at .59, the relationship between Primary turnout and Percent Absentee request is definitely there.] 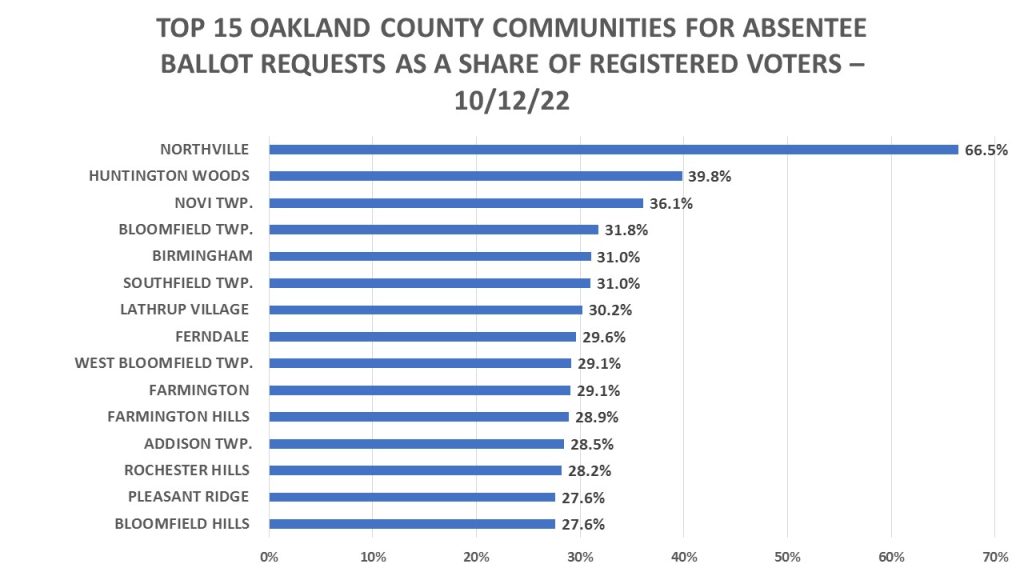 Figures 1 and 2 provide the Top 15 and Bottom 10, respectively.  In the top tier we have Northville, which blew away all others with a 66.5 percent share of voters requesting absentee ballots.  I am at a loss to explain why Northville voters almost doubled every other community in the county, and would appreciate hearing from Northville residents.  Six communities followed with rates in the 30.0 – 39.9 percent range – Huntington Woods (39.8), Novi Twp. (36.1), Bloomfield Twp. (31.8), Birmingham (31.0), Southfield Twp. (31.0) and Lathrup Village (30.2).  All seven fell within the Top 11 voter turnouts in the 2022 Primary.  The remainder of the Top 15 had rates falling between 27.5 and 29.9 percent.

The Bottom 10 consisted of communities where the absentee ballot requests accounted for less than 20 percent of registered voters.  The three lowest rates were found in the three communities with the lowest 2022 Primary voter turnouts – Pontiac (11.6), Hazel Park (13.4) and Royal Oak Twp. (14.1).  If we look at all 10 of the lowest request rates, we find 7 of them in the Bottom 10 for Primary turnout. 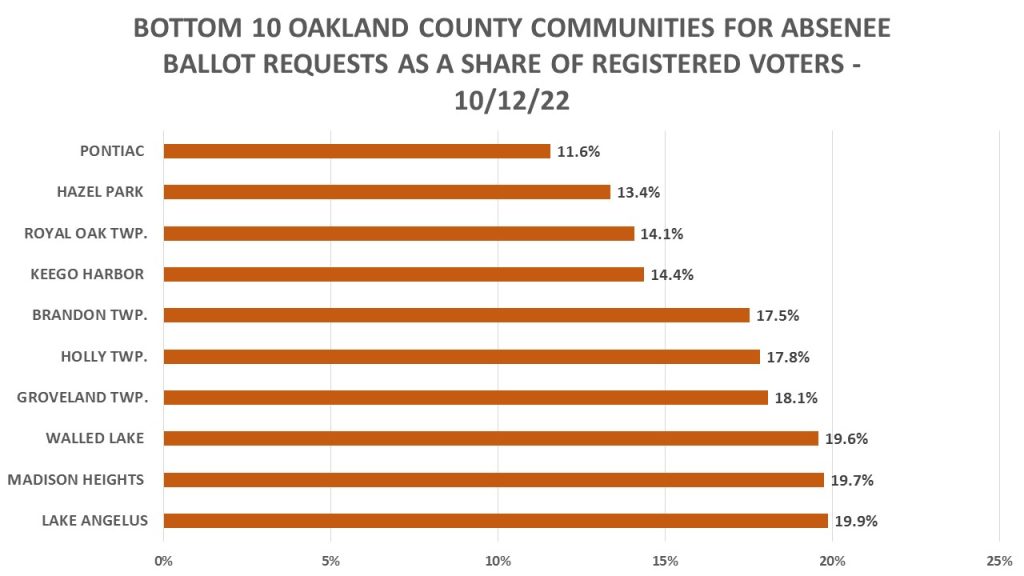 While I realize that many voters remain skeptical about absentee voting, the fact that low request rates track with voter turnout is of great concern.  The importance of this election to the future of democracy and women’s rights cannot be overstated.  Not only are we electing the three top positions at the state level, we are also electing our Congressional representative and County Commissioner.  If that is not enough, we are voting on 3 important Ballot Initiatives: (1) to increase financial transparency for our elected leaders; (2) to increase voter access and ease; and, (3) to establish a new individual right to reproductive freedom, and a Transit Millage that will authorize Oakland County to levy a millage for the purpose of funding public transportation services in Oakland County.

If that is not enough, many communities have local elections for school boards and other positions.  The most interesting contests are in Royal Oak Township where there are recall elections for both Supervisor and Clerk, as well as an election for Treasurer.  It is a shame that low absentee request rates may signal a general lack of interest on the part of its residents.

If you are still considering voting absentee, it is NOT TOO LATE.