Ferndale, MI -City leaders in Ferndale have long made conscious efforts to create a welcoming and inclusive community.  And among the proclamations, hiring practices, community events, policies, and discussions is a simple idea that seems to be resonating.

Mayor Melanie Piana has implemented a unique practice to start city meetings- a moment of mindfulness.

This practice consists of a group breathing, led by the mayor, at the beginning of the meetings leading into public comment. This practice meant to transform an environment that could potentially be nerve racking and tense, into a space for the community to share what is important to them.

Mayor Piana was inspired to implement this practice following a National League of Cities national conference in 2020. During the conference, there was an executive leadership training that discussed mindfulness for leaders which caught her attention.

Through the program, Piana went through a two day training run by a former member of British Parliament. Initially, a parliamentary group had worked on research that focused on how to improve relationships. From there the group created a mindfulness training guide.

These ideas resonated with Piana and she adapted what she has learned into her personal life and her role as mayor.  “I would like to learn how to be more present, how to listen more, but also be a leader who provides calmness,” she said.

Piana worked to have the practice fit into Ferndale’s local government. She expressed that during this time, council members were experiencing stress from the COVID-19 pandemic and high tensions. She also saw this as an opportunity to diffuse stress and to encourage respectful dialogue especially in public comment.

“Sometimes there’s really difficult topics that council needs to discuss on the agenda. It’s a way to come present and know that we’re there to hear and listen, but there is a way to be respectful and empathetic,” said Piana.

Piana noted that she is able to see a shift in the community’s energy seen in more relaxed postures and expressions.

“It feels like there has been a shift away from some of the personal insults that have been lobbed at Council and City staff in favor of more substantive critique – again, even when the issues are tough,” said Bruner James. “Likewise, it also helps remind me to stay focused and carefully consider new or opposing viewpoints.”

Additionally, Piana expressed that she has not seen this practice locally and is seemingly unique to Ferndale.

To further create a space that is conducive to new ideas and free expression, Piana also worked to create a “Discourse with Dignity Guidelines” alongside council members like Bruner James, city staff including city manager and communications director. Their goal was to make city meeting guidelines more “welcoming and inclusive.”

This project was formed over the course of a year to create a guide that establishes behavior expectations in the framework of free speech in the public comment.

Piana recalled that through her time in public office she had seen tensions rise nationally in the wake of social unrest, distrust in government and even local outbursts in public comment. From these experiences, she wanted to navigate these challenges with new guidelines and practices at the forefront.

Piana said, “We’re all there to better our community, we want to be welcoming and inclusive, new voices want to be heard and not feel as if they’re not welcome.”

Some of the key points from the guideline include encouraging people to focus on the issues at hand and avoid personal insults or name calling, stating that disorderly conduct is prohibited, discouraging abusive language, threats or bullying, and to overall create a respectful space for all community members to share their mind.

Bruner James stated that the guidelines can help people who have never participated in public comment do so for the first time and do so in a way that may make them more comfortable and express their points in a respectful manner.

“My perception is that most people who comment during meetings seem to take some queues from the guidelines – even when they’re addressing issues that they are passionate about- including passionately frustrated or disappointed),” said Bruner James.

Bruner James is also part of Citizens for a Fair Ferndale, which has helped facilitate candidate forums and create a Good Neighbors Pledge that residents and groups – including City Council and the Ferndale School Board – have signed to spread the word about how to engage with those who disagree.

Piana voiced that in her role as mayor she wants to continually implement improvements to the local government. Through these additions to the City of Ferndale’s government proceeding, the community can hopefully effectively participate in their community in an engaging, purposeful and mindful manner.

More information on City of Ferndale Boards and Commissions, as well as the Discourse with Dignity policy, visit the City of Ferndale website.  For more on Citizens for a Fair Ferndale, check out http://fairferndale.org. 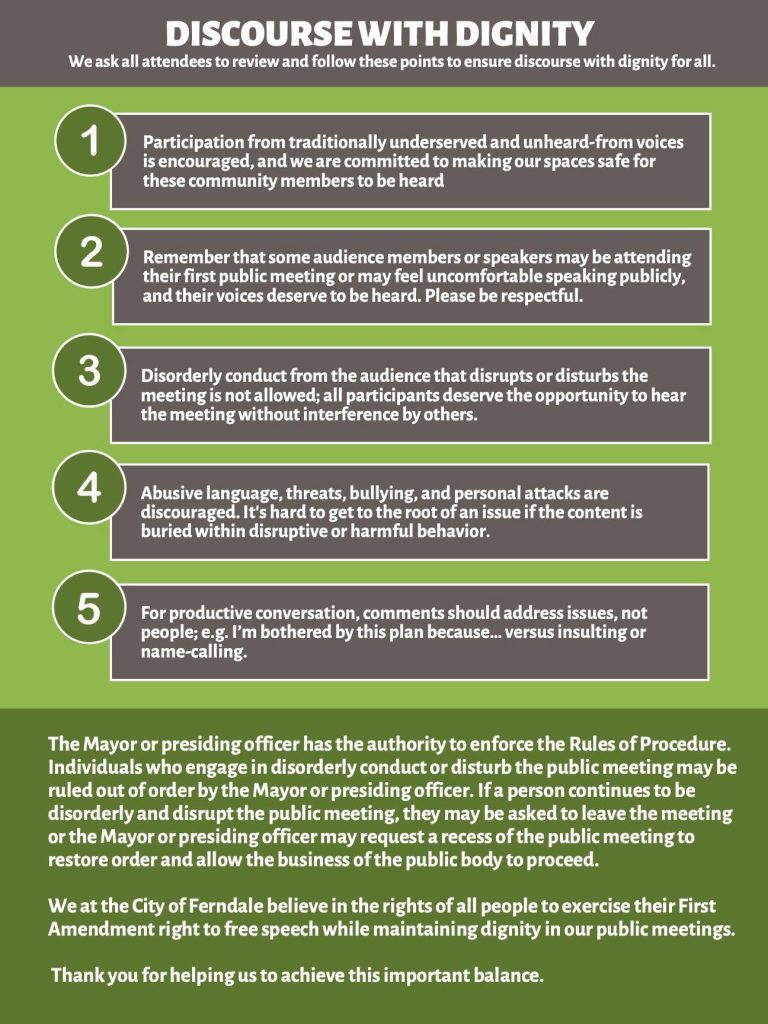