Detroit, MI – Beginning July 12, members of the Detroit Institute of Arts (DIA) are able to reserve tickets to its Van Gogh in America exhibition, which will run from October 2, 2022 to January 22, 2023 only at the DIA. Featuring more than 70 works by the famed artist, the groundbreaking exhibition is the first ever devoted to Van Gogh’s introduction and early reception in America.

Museum members receive a limited number of free special exhibition tickets depending on membership level. Memberships can be purchased at www.dia.org/membership. Tickets for the general public will go on sale later this summer. Tickets and additional information are available at www.dia.org/vangoghinamerica.

Van Gogh in America will be the largest Van Gogh exhibition in America in a generation, featuring paintings, drawings, and prints by Van Gogh from museums and private collections worldwide. Visitors will also journey through the defining moments, people, and experiences that catapulted Van Gogh’s work to widespread acclaim in the U.S.

Van Gogh in America reveals the story of how America’s view of Van Gogh’s work evolved during the first half of the 20th century and his rise to cultural prominence in the United States. Despite his work appearing in over 50 group shows during the two decades following his American debut in the 1913 International Exhibition of Modern Art (commonly known as the Armory Show), it was not until 1935 that Van Gogh was the subject of a solo museum exhibition in the United States. Around the same time, Irving Stone’s novel Lust for Life was published, and its adaptation into film in 1956 solidified America’s popular understanding of Van Gogh.

Van Gogh in America will also celebrate the 100th anniversary of the DIA becoming the first public museum in the U.S. to acquire a Van Gogh painting – his Self-Portrait (1887).

A full-length, illustrated catalogue with essays by the exhibition curator, Jill Shaw, and Van Gogh scholars Rachel Esner, Joost van der Hoeven, Julia Krikke, Susan Alyson Stein, Chris Stolwijk, and Roelie Zwikker, and a chronology by Dorota Chudzicka will accompany the exhibition. An adult and youth audio tour will also be available and is a free experience with the purchase of a ticket.

Van Gogh in America is organized by the Detroit Institute of Arts and is part of the Bonnie Ann Larson Modern European Artists Series.

This exhibition is supported in part by the National Endowment for the Arts, as part of the Dutch Culture USA program by the Consulate General of the Netherlands in New York, and the European Paintings Council.

The exhibition is supported by an indemnity from the Federal Council on the Arts and the Humanities.

Major funding for the exhibition catalogue is generously provided by Jo Elyn and George M. Nyman.

Extended hours and ticket prices for Van Gogh in America will be announced this summer.

For more things to do, visit the Oakland County Times Event Page!

Thank you to Jim Shaffer & Associates Realtors for sponsoring this section! 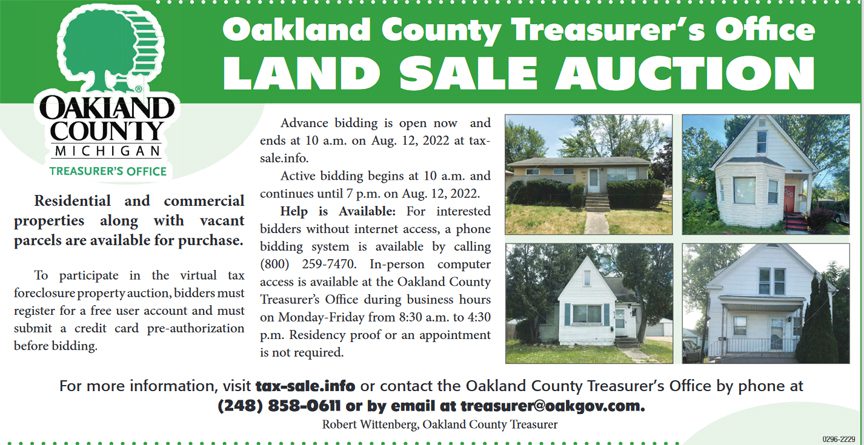