U-Haul Stats Add Depth to Population Data, Show Cost to Move In and Out of Michigan

U-Haul Stats Add Depth to Population Data, Show Cost to Move In and Out of Michigan

Oakland County, MI – For as long as I have been a demographer, tracking population trends, Michigan has been a domestic out-migrant state.  Every year, Michigan sends more residents to the other 49 states and D.C. than it receives in return.  We have tried a number of efforts to attract young talent (remember Cool Cities?) with mixed results.  When our economy has been in recession, we have experienced annual net losses as high as 80,000 or more.  When the economy is doing well, our losses tend to drop below 10,000.  As a result, Michigan must depend on natural increase (births – deaths) and immigration to overcome out-migration in order to grow.

The Census Bureau came out recently with its 2021 state population estimates.  A combination of continued out-migration (loss of 7,893), low immigration numbers (a result of Trump administration restrictions) and first-time natural decrease (more deaths than births) drove this loss.

One source I use to understand migration trends is moving companies.  Several put together, and publish, data on moves in and out of state.  United Van Lines just ranked Michigan 6th highest among states that residents are leaving – 58 percent of moves involving Michigan were out-of-state. U-Haul ranked Michigan 8th highest for out-of-state moves.  According to United, the primary reason given for moves to Michigan was “Family,” accounting for 48 percent of the total.  The primary reason given for leaving Michigan was a “Job,” accounting for 34 percent of the total.  While I feel strongly about family ties, I would rather see people identifying Employment as a reason for moving to Michigan.

My final go-to source for understanding the strength of migration in and out of Michigan is to look at the cost of renting a U-Haul truck to make the move.  When people are leaving an area in large numbers, rental trucks become scarcer and the price goes up.  When an area is on the receiving end of moves, a glut of trucks will lead to lower prices.

With that as context, I researched the following:  What does it cost to rent a 20’ truck on January 24, 2022 for 5-days between Oakland County (I selected Pleasant Ridge, Holly and Novi as representative cities) and 3 cities from the top 3 in-migrant states – Austin, TX, Nashville, TN, and Orlando, FL. Here are the results…a clear indication that it is much more difficult, and thus more costly, to rent locally. 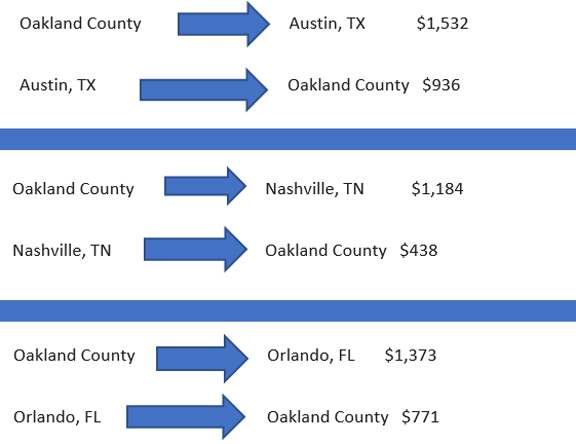 Personal Note:  Numbers for me are more than mere integers on a page.  Numbers form the basis of stories that need to be told.  I have made my career as a story teller, endeavoring to make sense of raw statistics and using them to produce information that is beneficial for others.  Over the years, I have made a point of delving into a range of non-governmental sources to add “flavor’’ to the data coming from the Census Bureau, Labor Department, IRS and a host of other federal, state and local agencies.

While my research on migration has depended heavily on Census and IRS data, I have found that data from major moving companies have both helped to support the trends reported by the government and to understand the reasons behind these trends.

I am always looking for additional data sources and would appreciate hearing of such from readers.  Please send your thoughts to dataguru1947@gmail.com.

Finally, if you want to explore the sources highlighted in this article, go to: