MML #1 – Officials From Across Michigan Learn About Reducing Homelessness

MML #1 – Officials From Across Michigan Learn About Reducing Homelessness
(Crystal A. Proxmire, Nov. 3, 2021)
Grand Rapids, MI – “What you see are single people camping out at street corners.  You see a large amount that are male and white,” said Kalamazoo Mayor David Anderson who also serves as Director of Housing for Integrated Services of Kalamazoo and a member of Kalamazoo County Public Housing Commission.
VISIBLY HOMELESS AND THOSE UNSEEN
Understanding the difference between visible homelessness, and those who struggle in different ways, is the first step to tackling the problems.  The people you see on the corners, he said, “are people who are resistant to services and won’t use the shelter system.”
Beyond those are people living in cars, inside vacant buildings, couch-surfing, or “doubling up” by staying with other people on a short-term basis or cramming into homes or apartments with others with nowhere else to go.
Anderson was among the presenters at the recent Michigan Municipal League Convention in Grand Rapids, where officials from around the state gathered to learn about topics related to local government.
St. Johns Mayor and Director of Michigan Coalition Against Homelessness Eric Hufnagel and Director of the Lakeshore Housing Alliance of Greater Ottawa County United Way Lyn Redmond also were part of the discussion.

“All communities have homelessness whether you recognize it or not,” Hufnagel said.
2020 data shows at least 63,000 people in Michigan are homeless.  Of those, 46% are black and 44% are white, which represents a disparity because in Michigan black people only make up 14% of the population.  8% have a physical disability.  12% have a mental health issue.  5% have a chronic health issue. And 4% report having a substance abuse issue, though that number is self-reported and is likely low.
The numbers are based on requests for service, which was down in 2019-2020 for several reasons including hesitancy to seek services during the pandemic, a statewide eviction diversion program, and an eviction moratorium. 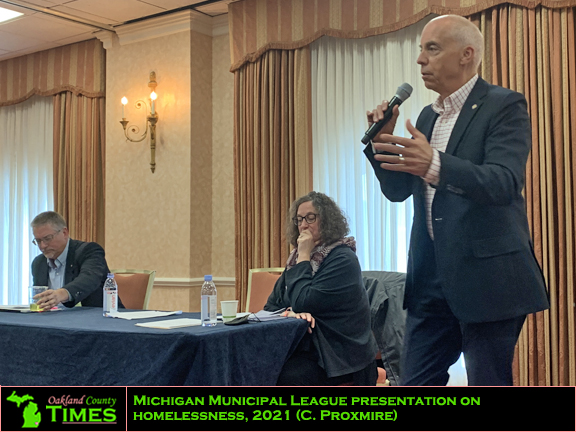 CAUSES AND FACTORS CONTRIBUTING TO HOMELESSNESS
“Homelessness is complicated.  I say that over and over again.  There isn’t just one thing that causes homelessness,” Hufnagel said.
Anderson gave some historical context leading up to today’s challenges.  “In the end of the 80s and early 90s, we ended the creation of new affordable housing, and stopped making new public housing.  A lot of communities now don’t have public housing at all,” he said.
Previously housing programs would guarantee loans to private developers and rents would be subsidized, with rent based on income.  Those programs ended and were replaced with voucher systems that may or may not provide enough to cover rent costs.  Often the amounts fall short of what’s needed, and finding landlords that accept vouchers can be a challenge as landlords don’t want to do extra paperwork and inspections, and some prefer not having low income tenants.

Anderson noted that the economy has changed, and job stability is more of a concern than ever.  “You could leave school and get a good job at an auto plant.  Those jobs have changed,” he said.
Another factor is the emptying of state-funded mental health institutions and that there are more people who simply don’t have the capability of managing their own living situation.  Substance abuse is also a factor.  “The numbers for substance abuse are low, but the reason is they are self-reported,” Anderson said.  There is a drug problem in Michigan and across the country. “These drugs are being inserted in our communities,” he said.  “Meth is available everywhere.  Fentanyl.  Heroin.”
Other challenges exist, particularly for those who have a criminal record, those who have bad credit, and those who find themselves applying for multiple rental opportunities and paying fees only to be added to a waiting list.
On top of all that is simply a lack of housing options, even for those that have jobs and aren’t dealing with health-related challenges. 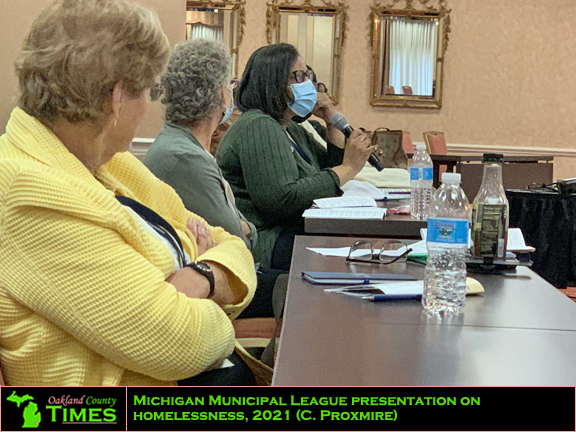 HOUSING AVAILABILITY AND SOURCE OF INCOME ORDINANCES
Raymond, who tackles the issue of homelessness in Ottawa County on the west side of the state, said “our single most difficult issue really is that lack of housing stock,” she said.  “We’re connecting with landlords and talking about housing vouchers.  A lot of landlords won’t take them. …We have a lot of vouchers but we’re lacking those units.”
Hufnagel agreed.  “Housing stock is the challenge across the board,” he said.  Statewide, only 25% of the people who qualify for a housing voucher are able to obtain one.  “3/4 of people can’t get help because there aren’t enough vouchers.  People go on waiting lists, then they get their voucher, and they can’t find anywhere to use it.”

The presenters spoke about “source of income discrimination” and the benefits of ordinances that prevent it.  Such ordinances mean that a landlord could not turn away a potential renter because they are paying with a housing voucher.  In Oakland County there is an effort underway to promote such ordinances.  Read more about that effort here.
Other efforts include requiring that new developments include a certain percentage of units to be priced for lower income levels.  However this can only be done if a municipality has a policy in place, and if the project requires something from the city such as incentives or the sale of city-owned land.  Ferndale is one example where a policy was implemented.
But in many communities, there just simply aren’t enough places to live. This doesn’t just impact low income people at risk for homelessness, but many in neighborhoods as older adults may look for different housing options, and workforce housing is needed.  In many communities there are complaints that young people who grow up there don’t have starter home or apartment options when they move from parents’ homes. And older adults that may want to downsize or be on a single level as they age may not have suitable housing options. In many types of communities competition for housing is fierce even among those with good jobs and incomes.

Some cities, particularly those with tourism and seasonal visitors, as well as those with large companies that bring in workers and clients often, are facing decreased housing options as more landlords convert their homes to Short Term Rentals such as AirBNBs.  This trend doesn’t just take out low income options, but reduces housing for middle-income families as well.  The economic crunch extends to local businesses who struggle to find workers when none can afford to live within driving distance.  Traverse City is an example where workforce housing has become a major problem.  Around the state cities are passing ordinances to limit Short Term Rentals, with Ferndale being one example.
“You have to focus on getting new housing in your community.  Whether or not you think you need it, you need it,” Anderson said.
Municipalities can evaluate land they own, and put out RFPs for developers to construct affordable housing.  They can also look at zoning to make sure areas in their communities are zoned to allow for multi-family housing, and do what they can to help housing projects succeed. 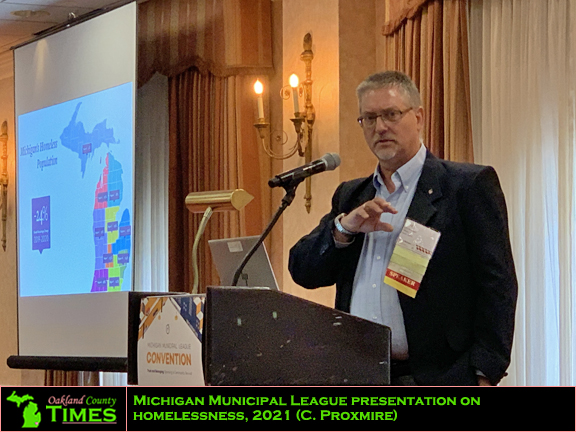 COLLABORATIVE EFFORTS
For some in the room, thinking about homelessness beyond just the visible panhandlers was an eye-opening start. For others that know the larger problems, there are still not easy solutions.  But collaborating with multiple entities both within municipalities and in regions can help keep momentum going and good ideas flowing.
School districts often have an understanding of the needs of homeless students.  And agencies that provide services such as food, shelter, employment assistance, and mental health services can work together to address underlying needs.
Anderson suggested that those hoping to reduce homelessness collaborate with the multiple agencies and entities that might interact with homeless or those in need, and brainstorm ideas for pooling resources and working together.
He also urged officials and administrators to use their power.  “Use your position to be a bully pulpit,” he said.  “Let people know about this problem.”
More info:
Michigan Coalition Against Homelessness
This article is part of a series about the Michigan Municipal League’s 2021 Convention that took place in Grand Rapids Sept. 22-24. We will be sharing articles from the convention over the next few weeks to help readers better understand the issues local governments face. If you aren’t already on our list for Daily Headlines, please sign up HERE so you won’t miss any of this exciting and informative series! Find other MML related articles HERE.
For more on Michigan Municipal League, check out their website at http://www.mml.org.