(Crystal A. Proxmire, July 17, 2021)
Grand Blanc, MI –  How does a raccoon look without it’s dark mask-shaped markings around its eyes or the trademark rings on it’s tail?  Howard Smith of Grand Blanc has been lucky to see for himself, as he’s be-friended a family of raccoons with a genetic mutation that makes their fur white and their eyes pink.
An albino animal lacks pigment to it.  There are also raccoons with greatly reduced pigment called blonde raccoons, where the mask and rings show up, but faintly, with a golden tint to the fur, and the eyes are dark like their traditional raccoon counterparts.  It seems Smith’s family have the pink eyes and lack of pigment that make them an especially rare find, although even blondes are an uncommon sight.  According to various reports including the CBC, 1 in 10,000 raccoons have albinism.
Smith worries that if he gives his name or location, it could bring undue attention to his little friends.  His name has been changed for this story, and we aren’t disclosing his area.

Smith told Oakland County Times a bit about the family.  He was also adamant about cautioning the public that raccoons are wild animals and that interactions with them could pose risks both to people and to the animals themselves.  Also, that children should not feed, pet, or play with wild animals.
In Smith’s case, he used caution when developing his friendships with this unique woodland family, some of whom he can hand-feed.
“It all started winter of 2018 when we first moved to Grand Blanc, there was a raccoon who would hang around and seemed to be very docile and well-mannered,” he said.  “She would eat pretzels and gold fish we would throw down to her (we have a raised deck). Quickly she became a fan favorite of friends who would come over as she would come when you made a clicking noise with your tongue and responded to the name we hand given her, Meeko.
“She would come by every evening at dusk for her treats, (hot dogs, piece of bread, goldfish (she really likes those) etc., and quickly became accustomed to being fed by hand. She would take things so gingerly, almost like a well-trained canine.
“Early 2019 I noticed what I had thought to be a cat late one night hanging around with Meeko deep into our

backyard and thought to myself, ‘what an odd pairing.’
“It wasn’t until a few weeks later when they had come to Meeko’s usual spot that it in fact was a white raccoon. They were both the same size and we did not know if they were siblings or one or the other was the mother. This albino never caught on to being fed by us or cared to be around when we came outside and would usually show up late into the night.
“After the winter early spring of 2019 we had not seen that one again. Meeko had continued to come and be fed solo through the fall and winter of 2019. Fast forward to spring of 2020 and Meeko showed up with two little ones and behold a baby albino was one of them.
“She was very trusting of us with her little ones and would often patrol our garden area (where we feed her at) while the little ones ate. She never showed any signs of aggression or fear of us around her babies which can be quite common for wild animals and their young.
“We named the standard colored one George after Curious George as he was always climbing on things and being mischievous. Being these two grew up around us they would also let us hand feed them. So Meeko, George, and The White One as we called her (did not know the sex at the time, couldn’t think of a good name) would continue to come and be fed from the porch much to the delight of ourselves and any guests who would come over to see the tame raccoons and of course The White One. This continued through 2020 as we watched the little ones grow up and develop their personalities.

This spring the next generation of babies started showing up, and Daisy has a litter with one standard colored baby and two albino ones!
“They all have their own unique personalities and traits enough so that if I could not visually tell them apart I could by their behavior,” Smith said.  “They will come to the back door and look in if I haven’t put their food out, once I open the door they quickly run off the deck to the area where we feed them, I like to try and put out a fresh bowl of water as well daily, they seem to appreciate that.”
Raccoons are considered a nuisance animal by the state.  They are an important part of the ecosystem, devouring insects and other creatures to keep pest populations in check.  However, they can carry diseases including rabies and worms; they can get into homes and vehicles causing damage; and they can bite or scratch humans or pets. And those with chicken coops definitely don’t want raccoons around.  Pest control companies find no shortage of circumstances for removing these animals from people’s attics.
“I think we got really lucky with Meeko being very trusting and easy to get along with,” he said.  “But I would not recommend kids to play with or feed raccoons as they are wild animals and can be unpredictable.”
Albino raccoons are rare in the wild, in part because their coloring makes them easy targets for predators. The lack of pigment in their eyes also can impact their sight.  While understanding the risks, Smith feels good knowing this family has a place to feel safe, to be fed, and to be appreciated.
Find more interesting and adorable stories in our Animals and Pets Section.
Oakland County Times is a reader-supported publication. If you like this site, please chip in on our PayPal page or sign up for a small monthly pledge on Patreon. 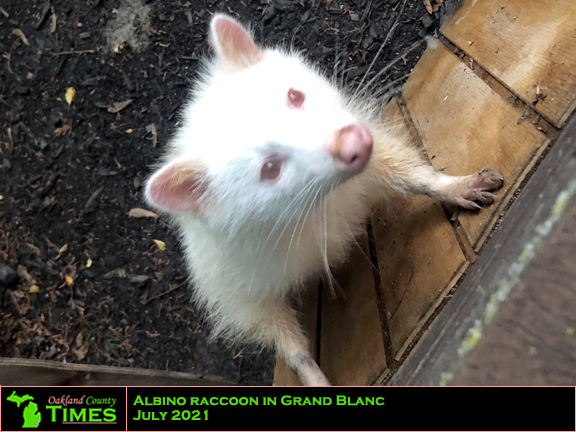 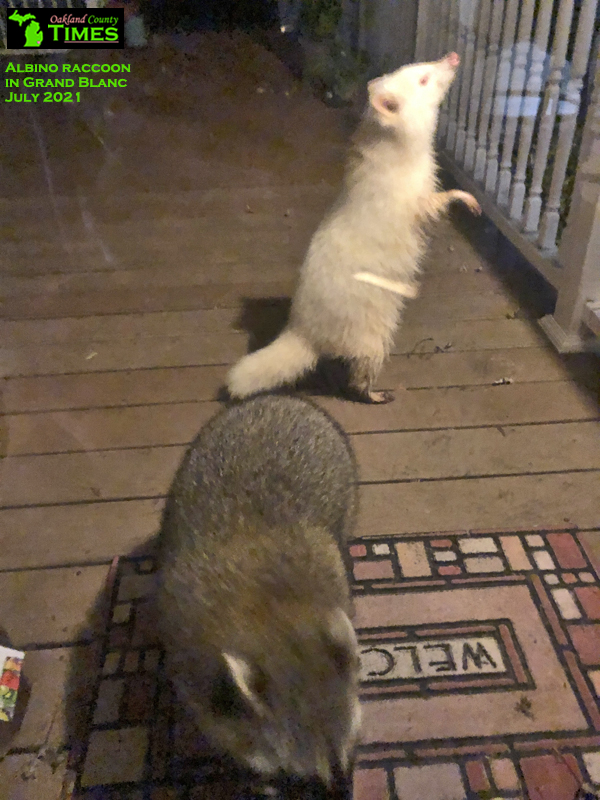 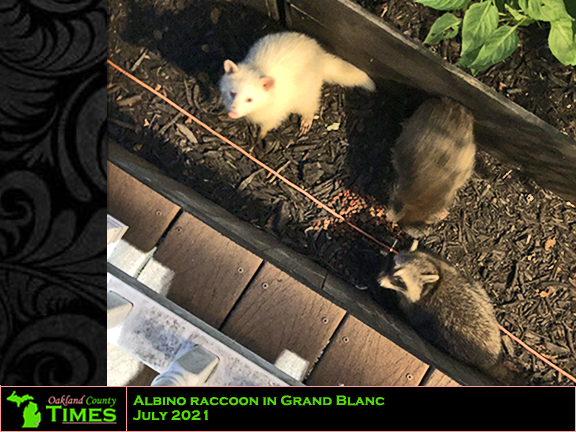 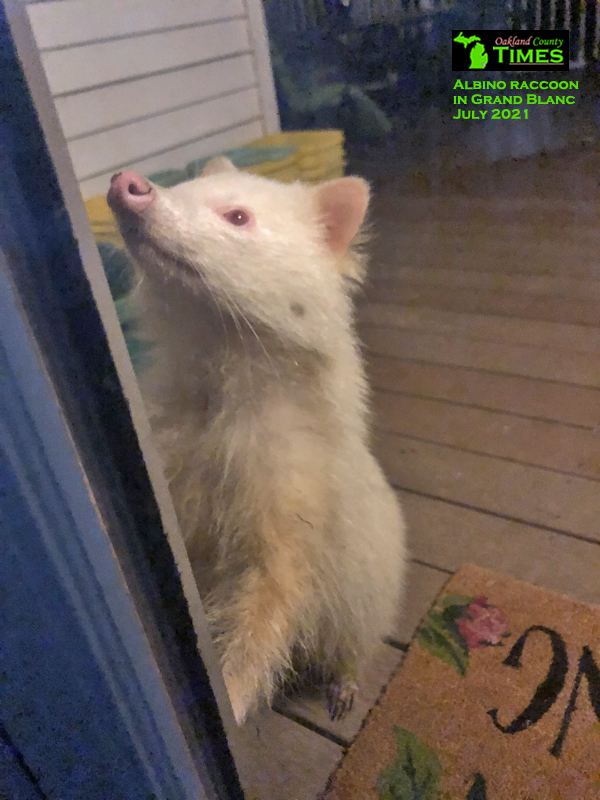 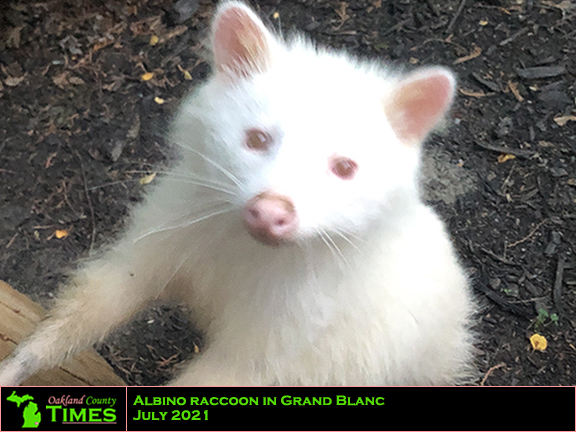 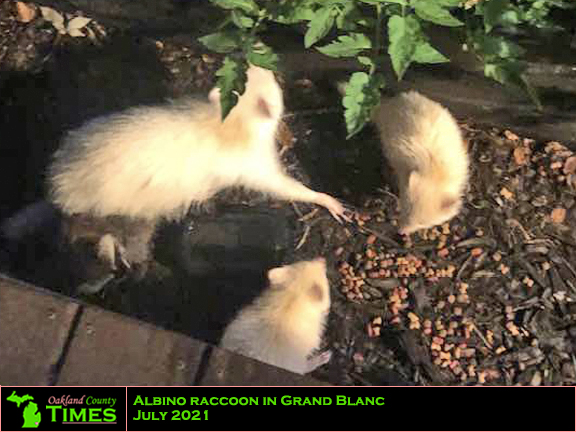 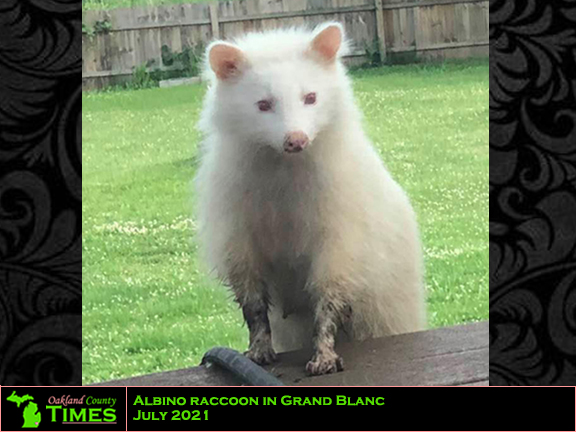