Clawson has always been a bit magical, but 50 years ago they welcomed in a small business, Wunderground Magic Shop – and the magic still continues. On April 1st, the shop celebrated its 50th Anniversary. Store owner Josh Wilde came to the store nearly two decades ago to work but took over the magic on his own just two years ago.
With tricks of all kinds lining the celebrated shelves, magicians were on-hand teaching and displaying their skills. Patrons wandered about with a bit of a Harry Potter-esque smile to their faces perusing the tricks for their next purchase.
“It has gone through several owners,” Wilde said. “It’s a fully stocked magic store with things for ages and all levels of expertise. There are pranks and gags for all ages. There’s puzzles, supplies, juggling balls and things that defy description. We basically have all the things no other store dares to carry.”  The fun includes juggling equipment, clown props, ventriloquist puppets, animal balloons, theatrical special effects, puzzles, games, costumes, novelties, pranks, and gag gifts.
Normally there are also performers available to hire for parties and events, but with COVID it’s

been tough for magicians and entertainers.  Wilde said some have adapted to doing online shows, but he said most are missing performing in person.
“Venues are adapting so slowly gigs are coming back but it’s changing the face of performing. Last year there was nothing,” Wilde said. “We did online sales.”
For those who dare enter, Wilde and his staff enjoy performing simple tricks and helping others perfect their craft.
“We let them look around and ask questions. Usually there are some tricks that are ‘self-working’ – you don’t have to know how they work. We teach every trick so you can do it before you leave,” he said.
There is a variety of classes for children and adults that have been on hold due to COVID but Wilde is itching to get them going again as soon as possible. He notes that it’s not just the trick that makes the magician, but everything they learn to present and to perform, that helps them in everyday life.

“All different personality types are magicians,” he said. “Magic actually teaches a lot of skills. Public speaking, you have to show your tricks to people so you get perform your tricks in front of people, critical thinking because you have to perform your tricks in the right order. It works the brain pretty good. It’s the most fun kind of puzzle,” he said.
Magicians are still big as David Copperfield still performs in Las Vegas, the advent of YouTube has captured performances of many magicians. Wilde lists Penn and Teller, David Copperfield, Blackstone, Doug Henning and more. And there are many actors who are also magicians.
“Jason Alexander – George from Seinfeld is a magician, Neil Patrick Harris and (the late) Bill Bixby. Most professional magicians are lawyers, doctors – we just had a heart surgeon in. It’s cool when magicians get together they come from all walks of life,” he said.
With 50 years’ worth of magic, props and equipment, Wilde kept coming back as a kid and eventually came on staff before totally buying into the store.

“We have so much great stuff and books. It’s the best stocked magic store I’ve ever seen. We have a lot of vintage tricks,” he said.
Wilde’s career as a magician includes being the opening act on a rock band tour for the band, Shine Down.
“We came out first and we got to perform in an arena of 30,000 people. It’s cool to feel that energy on stage. We do corporate parties, birthday parties and we make it safe for everyone,” he said.
The website explains the store’s quirky name: “Wunderground Magic was founded in 1971 by Charles Romig as Romig’s Magic Shop. We’ve moved around and changed our name since then. We have been known as Wunderground since 1981 when we moved into a space below street level in Royal Oak, MI. That location flooded, and we moved above ground…but the name stuck.”
Wunderground Magic is located at 16 S. Main Street in Downtown Clawson.  For more information, check out: https://wundergroundmagicshop.com.
Suggested Articles:
Bus Stop Magic Trick (Sept. 23, 2014)
Reporter Food: Downtown Charlie’s in Clawson (March 14, 2021) 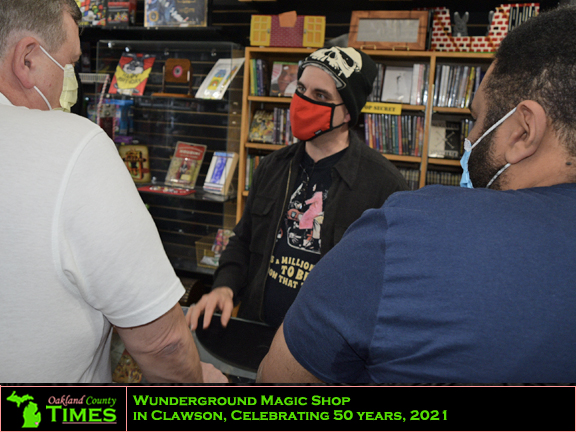 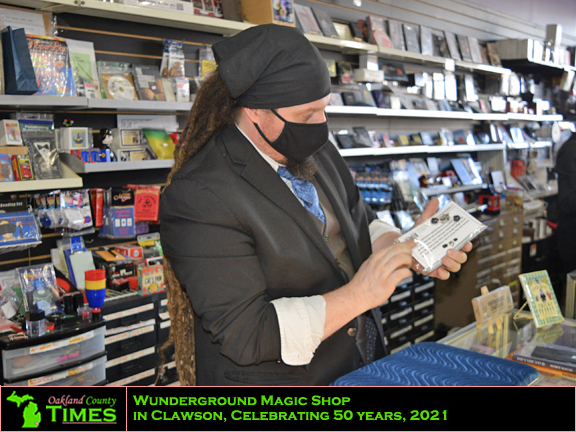 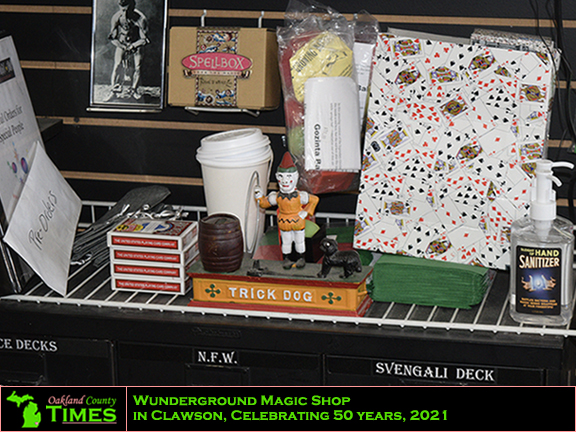 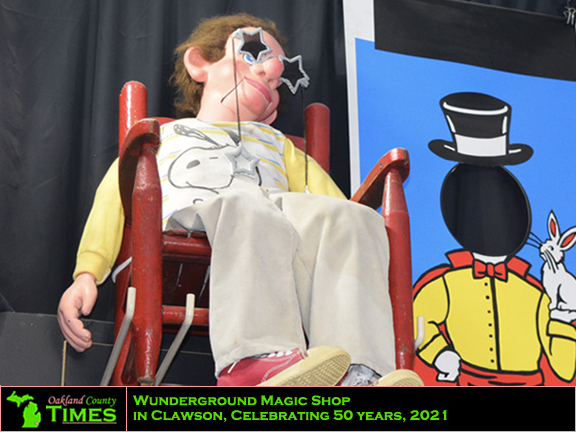 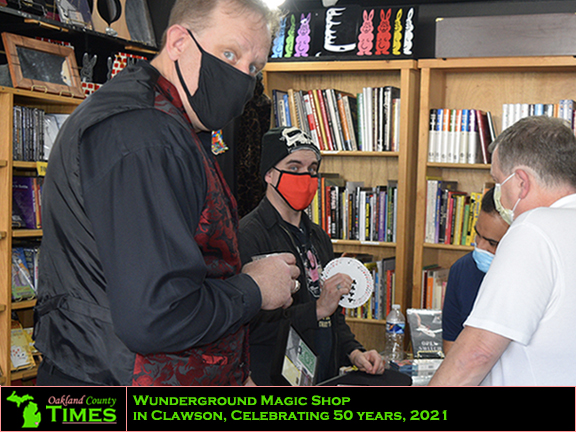