A Look at 2020 Voter Turnout and Absentee Trends

A Look at 2020 Voter Turnout and Absentee Trends

(Kurt Metzger, Data Analyst and Mayor of Pleasant Ridge, March 24, 2021)
The Michigan Secretary of State’s office has completed the audit of the November election.  The results of that audit lend more support to the state’s claims of a highly accurate and secure election.  It has also allowed for the release of a final voter database that provides final turnout numbers for all cities and townships in the state.  Also included are numbers of persons who voted by absentee ballot and those that voted in person.
I decided to take a look at Oakland County communities to better understand how different communities dealt with voting during a pandemic.
Let us first revisit voter turnout rates.  Three-quarters (74.9 percent) of Oakland County voters completed ballots in November 2020.  Fifteen communities, led by tiny Novi township and Lake Angelus, both with fewer than 300 registered voters, surpassed the 80 percent threshold.  Largest among these was Bloomfield township, with 38,432 registered voters and a turnout of 81.0 percent.  Three communities – Hazel Park, Royal Oak township and Pontiac – had turnout rates below 65 percent, with Pontiac (46.8 percent) being the only one not to reach the 50 percent threshold. 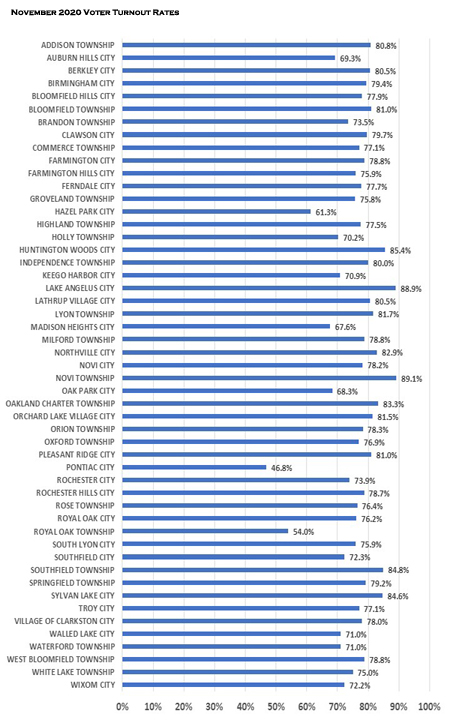 While communities differed in their final share of absentee ballot voters, there was a consistency across the board in the share of voters who requested absentee ballots and actually used them. Only four communities out of 51 had a return rate below 90 percent – Hazel Park, Keego Harbor, Pontiac and Lake Angelus.  Ten communities – led by Novi township and Lathrup Village – had return rates above 95 percent.
The percent of voters who voted absentee showed a much greater degree of variance, ranging from 80.2 percent in Huntington Woods to 52.0 percent in Groveland township.  Seventeen communities experienced absentee ballot shares of 70 percent or more [the County average was 60.2 percent], while five had rates below 55.0 percent. 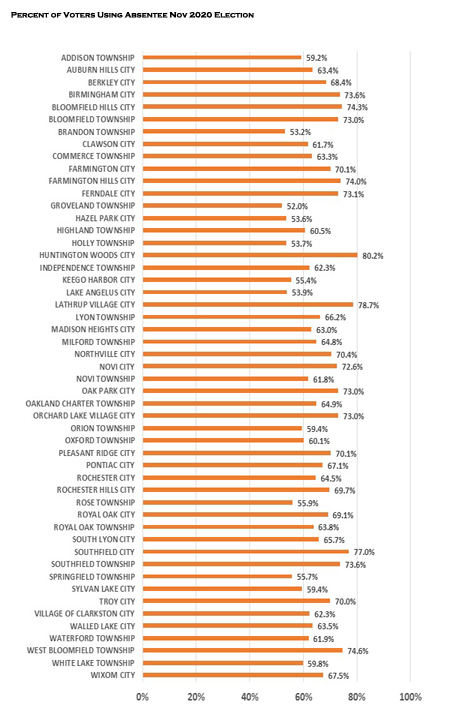 I decided to look at a couple of voting variables to see how they might line up with absentee shares.  The first was ‘voter turnout.”  In comparing voter turnout with the share of voters who used the absentee option, I found no correlation at all.  High turnouts occurred in communities with both high and low absentee rates, as did low turnouts.
The next obvious test, based on national political

trends, was to look at absentee rates in relationship to community rates of selecting Trump for President.  While the correlation was not deemed “high,” it would be regarded a strong “medium” correlation.  Communities with high rates of absentee ballot usage tended to vote for Biden, while low absentee communities tended to vote for Trump.
The chart below provides a look at Trump voting across the five highest and five lowest turnout communities.  While there are a couple of outliers (driving the moderate association), the trend is quite clear. 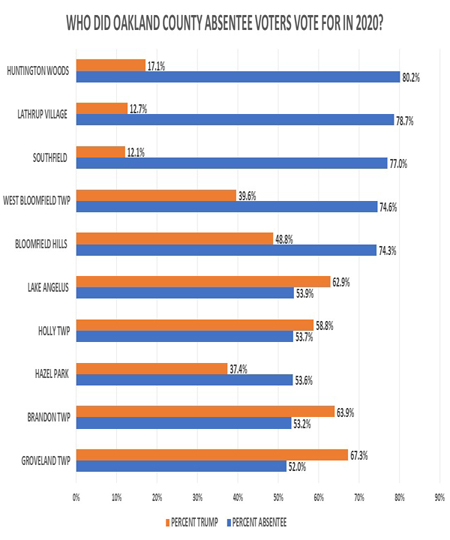 There are efforts across the country (more than 250 in 43 states, including Michigan, at last count), driven primarily by Republican legislatures, to impose restrictions on voting.

Universal, no excuse, absentee voting is being targeted in many states.  Michigan demonstrated that it can be done effectively.
The fact that Republicans used this option less in 2020 than Democrats is no reason to question its safety and accuracy.  All options should be on the table to encourage voter turnout.
As the 2021 elections approach, keep up with the latest by subscribing to Oakland County Times Daily Headlines.