(Crystal A. Proxmire, March 19, 2021)
Holly, MI – Waterworks Park could soon have a memorial honoring the women of Holly’s history.
Holly ACTS (Action, Community Transformation, Solidarity) is a group of active volunteers brought together by ideas for uplifting the community. In addition to sparking conversations around racism, standing up for postal workers, and gathering feminine care items for local pantries – the volunteers of Holly ACTS are creating a memorial in Waterworks Park to honor historic women of the community.
The memorial will be a storyboard that includes facts about women such as  Mrs. R.K. Divine who confounded the George Washington Club, Edna Winglemire  who took over the family furniture business in

1943 which is the oldest business in Holly, and Ardath Regan who was the first woman elected to Holly Village Council, first female president of village council, helped create the Holly historical commission, and co-founder of the Carrie nation festival and Dickens Festival.
These and more will have their stories  included on the memorial.
Holly Parks Commission and the Village of Holly have already given green light to the project, and now the task of the volunteers is to raise the $2,500 necessary for its creation and installation.
The group has set up a GoFundMe page and is already more than halfway to their goal.
In addition to erecting the new memorial, Holly ACTS will be restoring an existing plaque and post honoring Holly Area Youth Assistance.  “We envision a community event to be held at Waterworks Park later this Summer to unveil the memorial and beautified space, as well as honor

many of our living  female leaders with a very special program that will be sure to recognize the rich history of our community,” the fundraising page states.  “We appreciate the incredible support throughout the community in our research, effort, and commitment to this project. Special thanks to Linda Smith, Leslie Osman and Nicole Edwards Rankin at the Holly Historical Society, Nick Klempp with the Holly Downtown Development Authority, Sherlynn Everly, Genevieve Rainey, Meghan Hill, Amber Kier Ogg, Angela Lemmon, Angie Stinde, Laura Legant, Joseph Mishler at the Holly Veterans Resource Center, Tena Alvarado at Holly Area Youth Assistance,  The  Holly Township Library, and all members of the Parks Commission and Village council, for their support and help in various ways to bring this project to fruition.    All community support is graciously appreciated!”
Waterworks Park is in the midst of transition. A deteriorating building has been removed and plans are in the works for a pavilion and kayak lockers, according to Village Manager Jerry Walker.  “The park is beautiful and under utilized,” he said.
For more info or to donate visit the GoFundMe page.
Learn more about Holly ACTS on Facebook.
For more news, visit our Holly News Page. 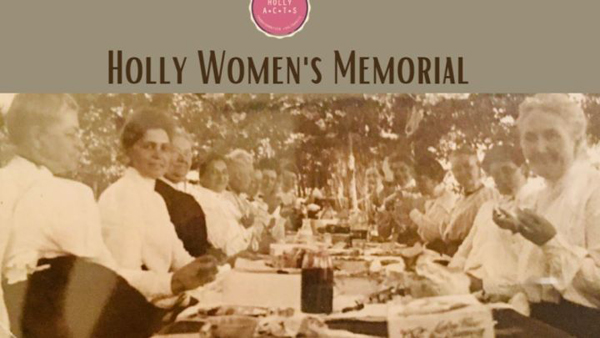