Outside Drinking
(Crystal A. Proxmire, Feb. 5, 2021)
Ferndale, MI – In July 2020, the State of Michigan passed legislation to give local governments the option of creating social districts to allow for outdoor consumption of alcohol, and Ferndale is joining the list of those taking an interest.
At the Jan. 25 City Council meeting Downtown Development Authority Director Lena Stevens presented preliminary ideas for the social district so council and the public could mull them over and ask questions. The idea is likely to return to council this month.
At this point the working idea is that there could be one social district in the downtown with two commons areas where people could purchase beverages at participating bars and restaurants to be taken outside in those designated areas. These commons areas would be called “PATIO Zones,” short for “Pay And Take It Outside.”
One PATIO Zone would be on each side of Woodward and patrons would not be able to

carry their drinks from one side to the other.  The zones would be clearly marked.
Many provisions in the PATIO proposal are based on state laws. For example, businesses participating must apply for a special license, and all drinks sold will go into specifically marked cups. Stevens said that the City would likely purchase biodegradable cups with PATIO branding, and businesses would be required to add their own stickers to the cup as well.
The obvious things apply, like that there will be limited hours (current draft proposes Thursday – Saturday 10am-10pm, Sunday noon-10pm), and only those 21 and older can purchase. The City is already discussing plans for trash containers and management, as well as what might be needed in terms of police patrol.
At the Jan. 25 meeting, city leaders discussed making the designation a short term pilot program that would give the city time to test out the idea and make changes if necessary before renewing the district for a longer term.  However, since that time legal advice has prompted the city to take a different approach.  Instead of the pilot period, the PATIO program would begin April 1, and there would be a

report to council no later than July 1 so that council would have the option of revoking the zone or leaving it in place.  The designations could be removed by council at any time, but this window gives a chance to let the program get rolling and is long enough for business owners to get value out of their investment should it not work out long term.
Other communities that have established social districts or are in the process include Clarkston, Farmington, Holly, Lake Orion, and Pontiac. Northville also has a social district, though it’s on the Wayne County side.
The City has also spoken with leaders from Battle Creek, Kalamazoo, Grand Rapids, Adrian, Belleville, and Grosse Pointe Park to learn how they have been handling their social district implementation.
It is likely to go before the DDA Board of Directors for their Feb 11 meeting and then City Council at the Feb 22 meeting. After that an application would be sent to the Michigan Liquor Control Commission. The approval time is expected to be 2-3 weeks after which, individual businesses can apply to the MLCC for a permit to participate in the Social District program. The goal is to have the districts in place by April 1.
More information will be included with the Ferndale City Council agenda on the City of Ferndale website prior to the meeting. 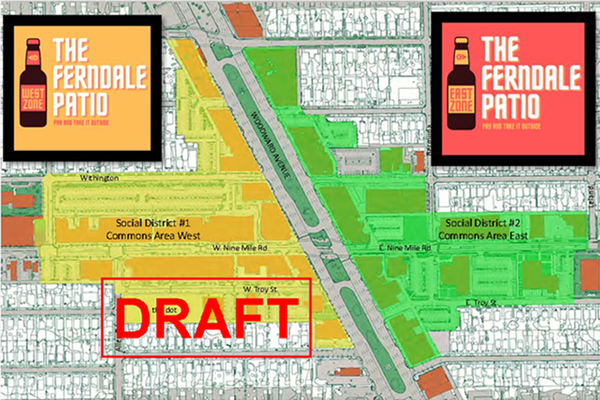