Photography
(Crystal A. Proxmire, Jan. 12, 2021)
Southfield, MI- Ronald Taylor loves visiting the American Commerce Centre Nature Preserve and Pebble Creek Park, which are enchanting pockets of nature surrounded by Southfield’s skyscrapers.  There he’s used his camera to capture countless images, like the three that were selected as finalists in the Southfield Photo Contest.
One was of a deer standing in the water. Another was of an orange Monarch butterfly landing on a purple flower, popping brightly against the background of green leaves.  And his photograph of a crane mid-flight was chosen as the contest’s second place winner.
Taylor’s photos as well as scenes from other local photographers were included in the City of Southfield 2021 calendar.  This is that third year Taylor has had his work included in the community’s annual tradition.  He does both studio and nature photography professionally, with his work being showcased at eyetakephotos.biz.

“I was born and raised in the City of Detroit but have been living in Southfield for the last 14 years. The community apartments where I’ve been living for last 14 years is clean and safe alone with the surrounding areas in Southfield. I appreciate the beauty of Southfield and the alert public services,” he said.
Taylor told Oakland County Times that he actually prefers studio photography.  “I enjoy the control that comes with setting the scene, specifically lighting,” he said.
“This past year has been slow for studio shoots with models due to the virus. But I do other photography in my home studio like macro photography and water collision art photography.
“Even though I love photography, it’s one of the surrogates for my absolute love of being creative. Photoshop’ing my images is a path to be creative. Another path for that creativity is making music beats.”
The first place award went to Timothy McNutt, whose image is of two happy young ladies standing

inside a teepee made of sticks at Bauervic Woods Park, which is located on Nine Mile west of Evergreen.  Here families can play on the playground, enjoy picnic areas, and hike on nature trails.  The contest results were determined by the most overall online votes each finalist received, and McNutt got 350 votes for the win.  The smiling faces he captured will be gracing homes and offices during the month of March.
Nearly 200 submissions were received for the competition, which was narrowed down to 25 by the Total Living Commission before being put online for public voting from July 10 – Aug. 31.  The finalists’ images were blown up and displayed for a socially-distanced outdoor reception last summer. Each gets to keep their enlarged image.
James Simpson was pleased to have two photos make it to the finals.  One was a picture of a red barn located on 12 Mile Road near Telegraph.  “The barn is nice and I don’t think people get to stop and see it like it should be seen,” he said.

The photo selected for third place came from a lucky moment – a double rainbow!  “I came out of the house after a short rain shower and everyone was looking up so I knew I had to get that shot,” he said.
Simpson loves using his drone to capture images of the Southfield and its eclectic cityscape.  He’s even got a YouTube channel with videos of his flights on it and a business called Leafy Bug Aerial Photography.
“I love having my pictures in the calendars,this is the third time I get to share with the world the different things that I love around here,” he said.  This is his third year being included in the calendar.
“I can’t wait for this year’s contest. I think I have some pretty good pictures to enter. I love nature and flying drones to show sights that the normal eye can’t see.”
Other Southfield spaces get the spotlight in this year’s calendar as well, including Mary Thompson Farm, the peace poles at the Donald F. Fracassi Municipal Campus, Burgh Historical Park, Inglenook Park and more.
Learn more about the City of Southfield at https://www.cityofsouthfield.com/ 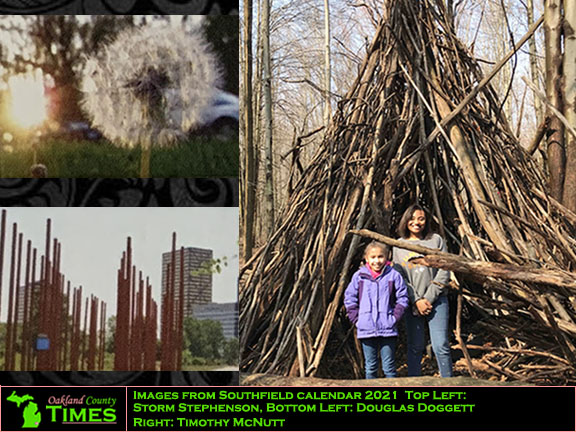 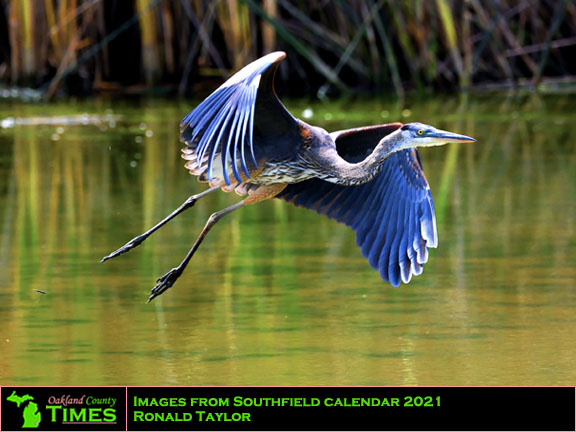 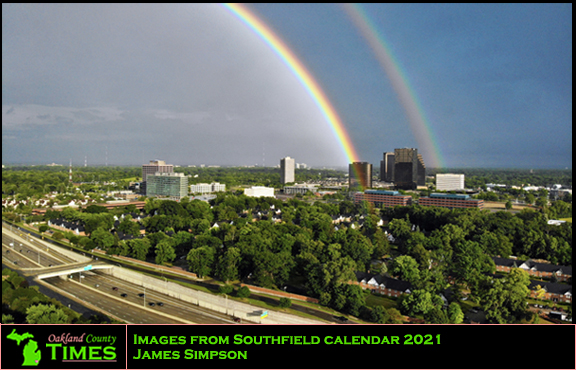