(Crystal A. Proxmire, Jan. 20, 2020)
Holly, MI – Cari Cucksey has built her career on using the beauty of the old to shape the new, from finding the best antiques on her HGTV Show Cash & Cari, to the remodeling of an historic bank into The Holly Vault (which is an advertiser on this website).  One of her latest projects – adapting a 1913 school building into a boutique hotel and event space – will come before the Village of Holly Planning Commission on Wednesday seeking a zoning change.
The Holly School building is located at 111 College Street, in a residential neighborhood about half a block off Maple Street, just a few blocks from Downtown. Currently the property is zoned residential. The Planning Commission is being asked to change it to commercial.

The Holly School was built in three phases. The oldest part of the building, which is single-story cream-colored stucco, was built in 1913.  Its unique design included bathrooms that could be accessed from the outside so that during sports practice and games students could use the facilities without having to leave the entire school unlocked.  In 1927 the two story addition was completed, and more was added on in 1954.
The building was used as a school, and then by the River Church for about ten years.  The purchase of the property put it back on the tax rolls after 104 years of being exempt, and the renovation and activation of the site will mean even more revenue for the Village.
Cucksey and her team are still evaluating the number of rooms in the boutique hotel/bed and breakfast part of the site.  When the project was first announced in late 2017, the vision included 22 rooms. However since that time they’ve been dreaming of different ways to configure the space.  While the number of rooms is not set in stone, they do know that there

will be ample banquet and meeting room space, which will put the school’s old gymnasium and theatre to use.  There will be an onsite kitchen, and a bar to serve guests at the events.
Bob Donohue, known throughout Oakland County for his work revitalizing downtowns and promoting historic preservation, is a consultant on the project.
He told Oakland County Times that the project would preserve the historic exterior of the building, and that features inside would be retained and highlighted, such as keeping the old chalkboard on the walls, and using what they can of the vintage flooring and trim.  He also said landscaping would be improved.
The building is not in an historic district, but it is nearby. Donohue said that preserving the building is a choice by the owner, and not a requirement.  “Other communities have made mistakes in people coming in and tearing down old school buildings,” he said.
Often old schools are sold to developers to be demolished for new housing, which normally can happen without a zoning change.  Other common fates for old school buildings are to be converted into

multifamily residential, group homes, assisted living, or sold to a charter school.
Online, neighbors have expressed mixed opinions about the project. Some are excited to be past the blight of a vacant building. While others are concerned about increased traffic, noise, and parking.
Donohue said the parking and traffic “is not any more intense than when it was a school.” He added that unlike a school, the event space would not be busy every day.  He said that in addition to the parking lot onsite, there is an arrangement with Holly Area Schools to rent their nearby parking lot for valet during weddings and events, which will also will bring extra revenue to the district.
Neighbors have also questioned the serving of alcohol at wedding receptions and other events.  When asked about that concern, Donohue said that the Holly Vault stops serving at 11pm, and anticipates a similar standard for the Schoolhouse project.

“I know there are some people who wish it could could just stay empty with no activity.  But something is going to happen there, and we think this is a great fit,” he said.  Donohue also said that it will bring shoppers to the businesses downtown, add jobs to the community, and “when people have visitors coming from out of town, they won’t have to look far for a hotel room.”
The Planning Commission meeting takes place Wednesday, Jan. 22 at 7pm at the Karl Richter Community Center at 920 Baird Street.  Members of the public are welcome to attend and to comment.
More info:
Village of Holly Planning Commission Agenda
Holly Schoolhouse to Become Boutique Hotel and Banquet Center (Dec. 6, 2017)
Note: Pictures below were taken by Oakland County Times in 2017. 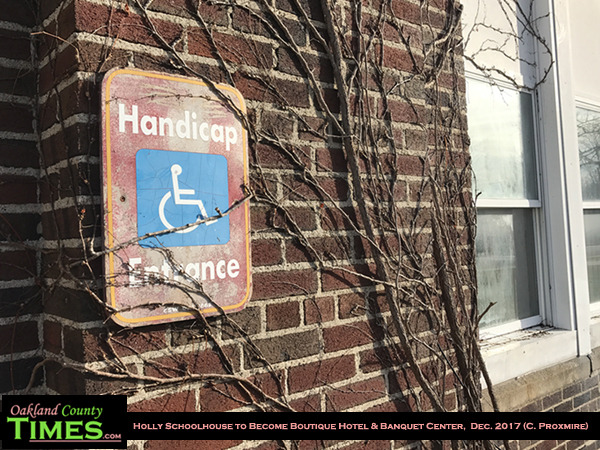 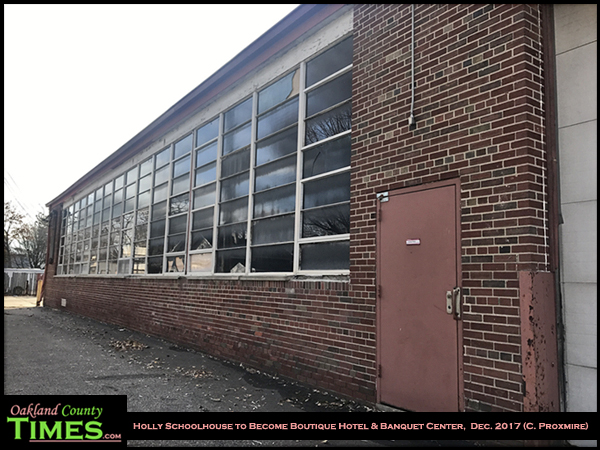 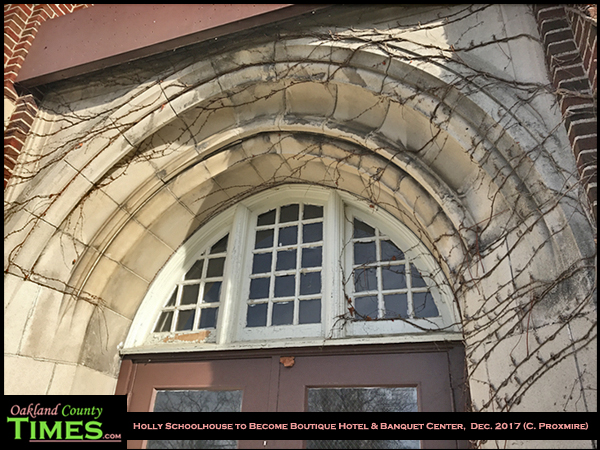 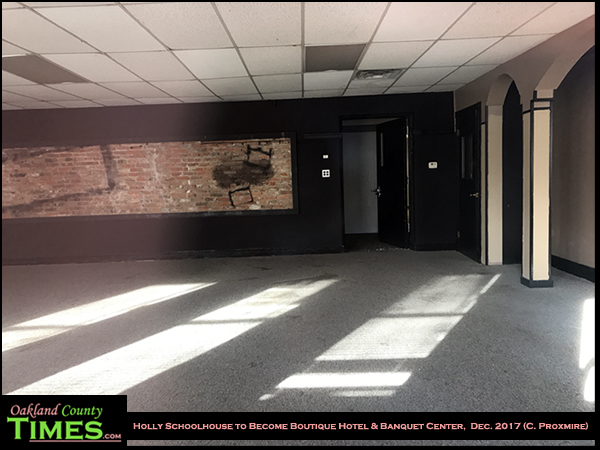 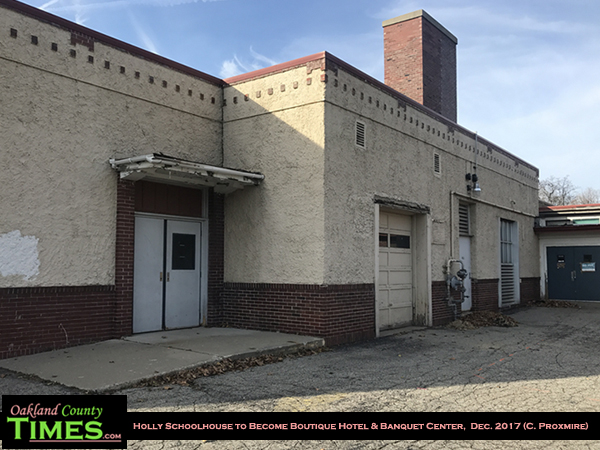 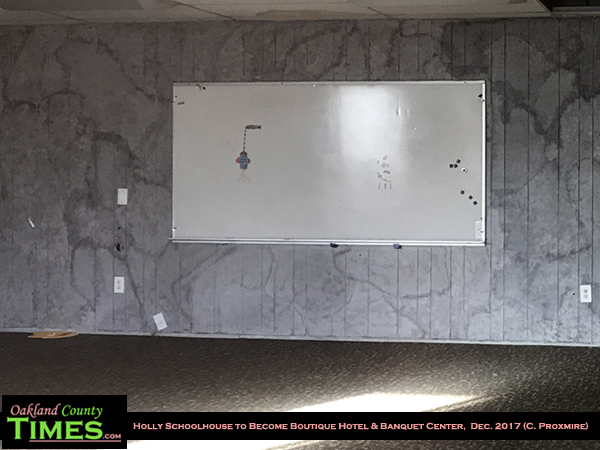 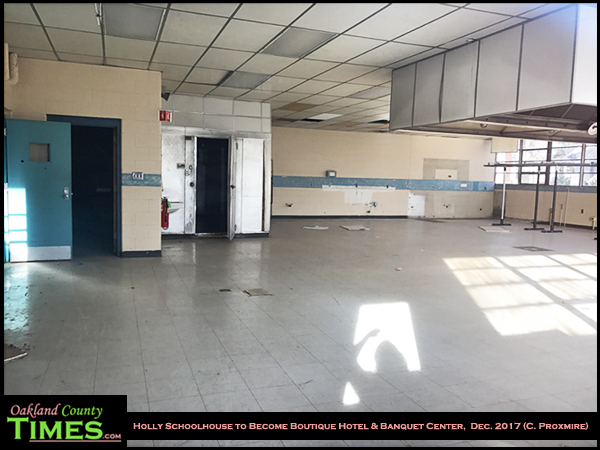 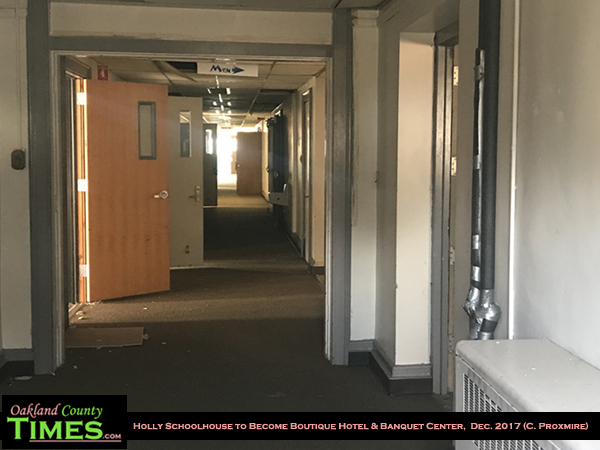 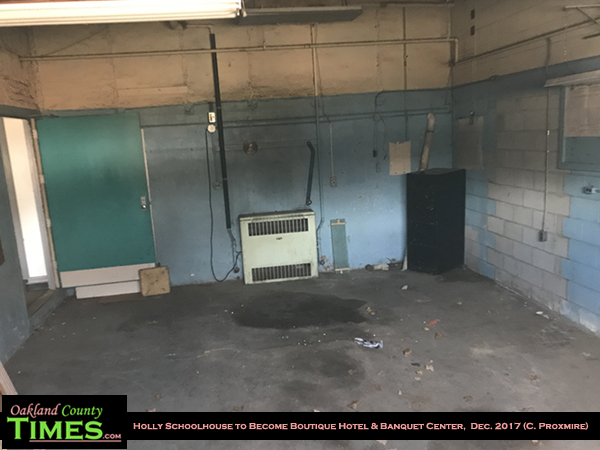 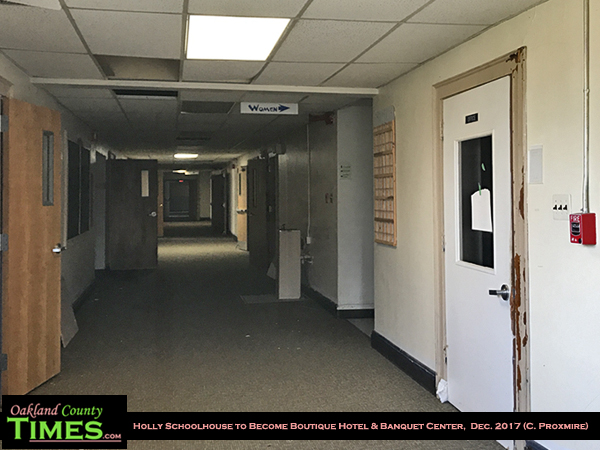