Moonbeams for Sweet Dreams Crowd
(Sam Gurwin, Jan. 3, 2019)
Royal Oak, MI – Moonbeams for Sweet Dreams is a tradition where hundreds of people gather on the grass around Beaumont Hospital in Royal Oak to shine lights and show support for kids who are hospitalized during the holidays.
For three years Beaumont Hospital’s Pediatric Division has been inviting the public to shine flashlights up to the Children of 5 South Wing- To show they are not forgotten and that the community cares. This happens for most of the month of December at 8 pm (for about 15 minutes).
Earlier this month, several members of the Jedi Council of Michigan & Crazy Cosplay

Adventures attended the event, some donning light sabers and sending good vibes up to the kids. Even as one Sith’s saber ran out of energy, she still waved a cell phone light and borrowed another light-saber to make sure the kids could see her.
The hospital representative was on the bullhorn, helping stage people as well as leading the crowd in song. A giant shout of “sweet dreams” in unison by the masses ended each special night.
Benjamin and Andrea Remein of White Lake were proud to be part of the people. Their five year old son was in the hospital in early December for a palate reconstruction. They joined with those outside to be a light for other kids who didn’t get to go home for the holiday. The Remeins praised the care in the Pediatric Wing.
“Our doctors are amazing” said Andrea, holding back tears. She spoke about a specially-

trained group called the Child Life Department whose mission is to help make hospital visits less scary for the children,. “The things Child Life does for these kids is amazing”
The Child Life Department had a glow party, a Santa party, and a therapy dog visit. “He wasn’t afraid,” Andrea said.
Among the crowd was an enthusiastic group of Girl Scouts from Troop 71494 of Lake Orion.  Scout Leader Heather said “We’re here to support the kids.” Not only did the troop arrive with a sign that said “Moonbeams,” they also raised created a Scout patch to sell and donate part of the proceeds to the Children’s Miracle Network.  “It just warms our hearts seeing the kids shine their lights back and dancing in the windows,” Heather said.

Firefighters and police from Royal Oak and neighboring cities are regulars for Moonbeams.  Ferndale’s Department of Public Works brought out their decorated work trucks as well as donated 1,600 glow stick bracelets to the children.
Carlos Kennedy, Director of Ferndale DPW, was proud his crew could be part of the event. “I believe it is valuable for many reasons. We feel it is something positive we can do for the children in the hospital while letting them know we care about them. The DPW team will feel as if they are doing something good as a group, which will help boost morale within the department. It will also allow us to represent our community of Ferndale in a positive light.”  Kennedy credited senior DPW employee Jason Hobbs for making the connections and arranging for the donations. Ferndale Police and Fire also brought their lights to share with the children and the community.
For info on Moonbeams for Sweet Dreams as next year’s even approaches visit the Beaumont website. 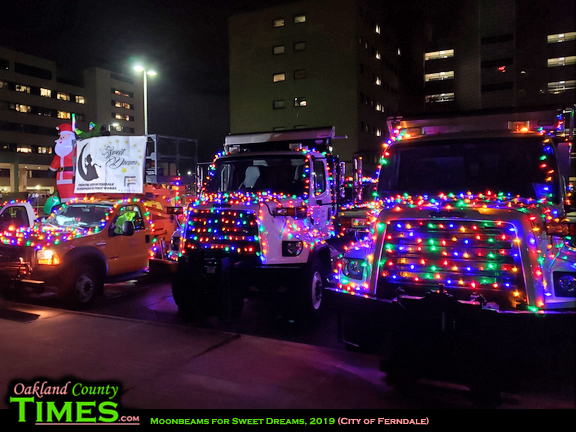 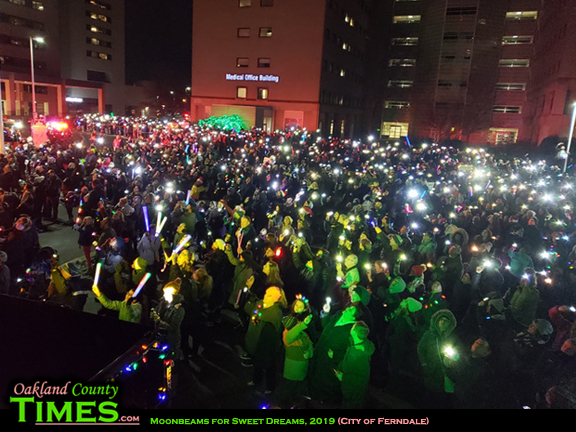 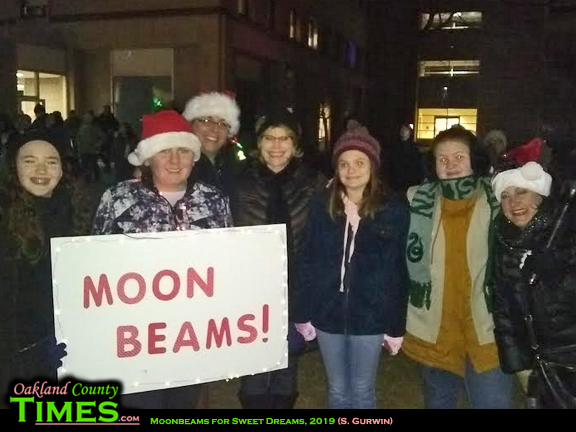 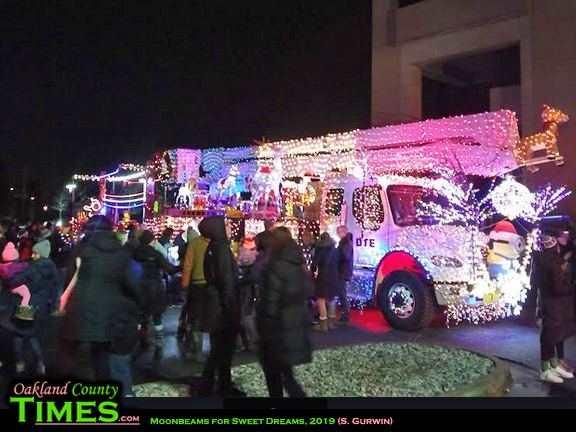 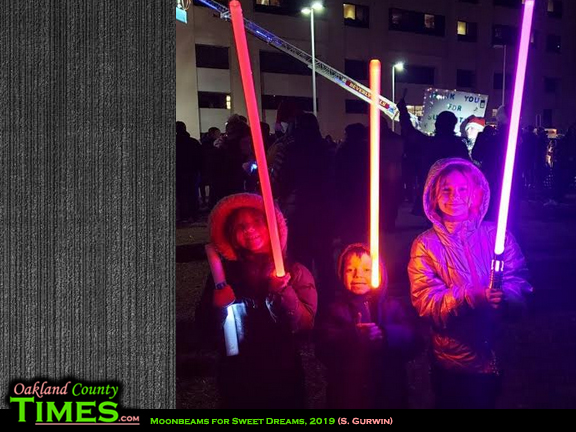 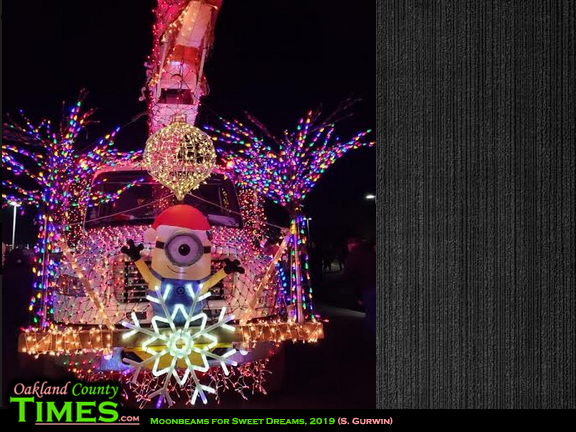 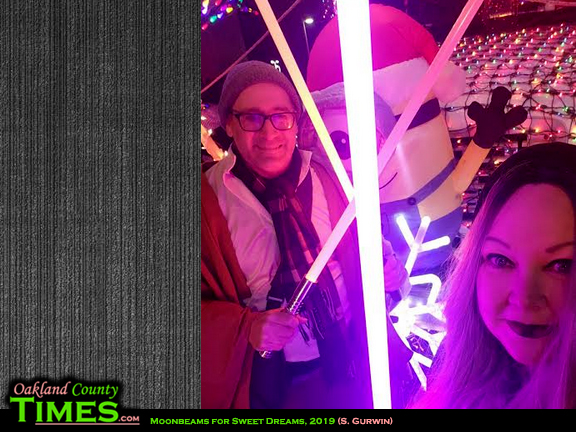 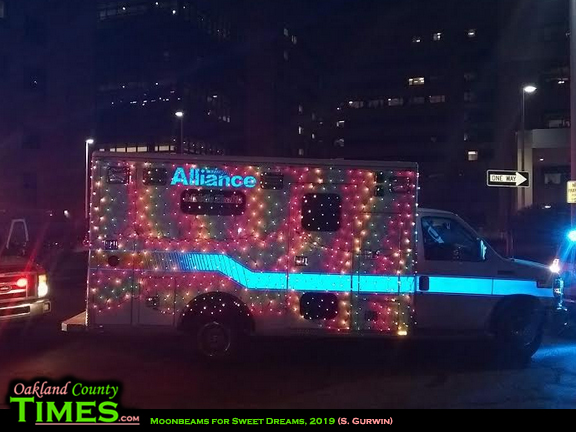 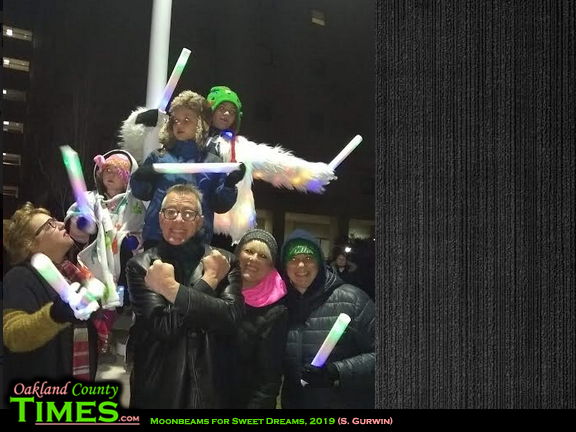 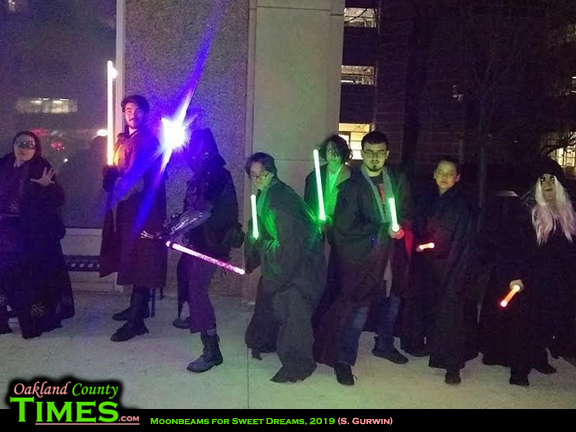 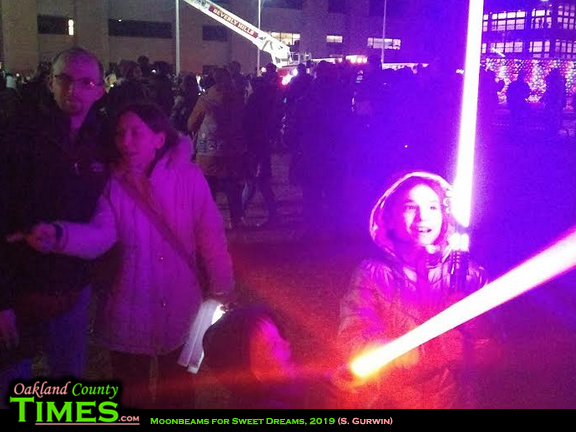 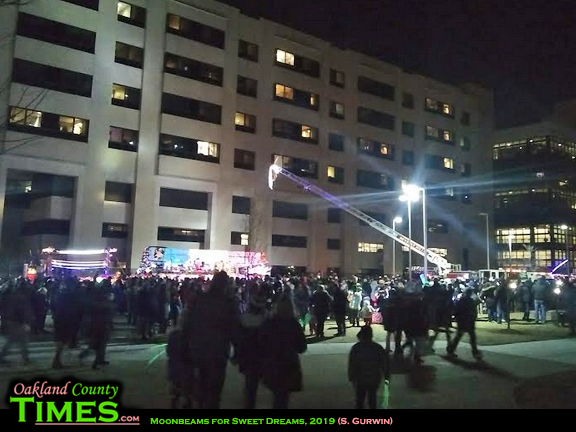