Detroit, MI – Creating people-friendly environments is a challenge in cities big and small. That’s why officials from across Michigan know that to thrive means looking around the globe for good ideas and ways of doing things – including Malaysia.
Jia-Ping Lee, who goes by Ping, was a keynote speaker at the 2019 Michigan Municipal League Convention in Detroit earlier this fall. She is the Program Director for the Malaysian Think (And Do) Tank Think City, and she was happy to be in Detroit sharing lessons she and her organization have learned in ten years’ worth of community revitalization.
“Our goal is to make cities more people friendly by catalyzing change in the way cities are planned, developed, and celebrated,” she said.

The presentation focused on two cities and how the “think big, act small” philosophy helped transform neighborhoods in George Town and Kuala Lumpur.
George Town is the capital of Penang Island, a state in Malaysia.  While it once thrived as a trading city, it became run down and suffered from a “brain drain” as young professionals and creatives sought their dreams elsewhere.  A major blow to the area came in 1999 when rent controls were lifted and prices went up tenfold, leaving many long-term residents and business owners homeless or struggling to survive. The boom in prices eventually led to increased vacancies and rundown buildings. The community park had turned into an unofficial market for purveyors of stolen goods.
Efforts to keep up the appearance of aging buildings and features resulted in what character was left being covered beneath large amounts of white paint.
Think City began to look at ways to attract talent to the city, and make it a place where people who grew up there would be proud to stay in or come home to.  “We launched the Hub and Home campaign to attract people back,” Ping said. The idea was to get people excited about being part of the community’s comeback.
They reached out to the owners of a boarded up hotel who had moved to Sri Laka and convinced

them to come back, invest in the property, and be part of rebuilding the city.  Once people saw the Seven Terraces hotel restored, with its bright accents signaling an era of change, neighbors followed suit. Fundraising and grants helped as each small improvement helped uplift the entire neighborhood.
The community embraced the idea of stripping away the white paint, and celebrating the bright colors of the architecture’s past. When restoring an historic fountain, for example, they learned what was beneath the dreary white paint, and redid the fountain’s façade in its original teal and yellow.
An effort to revitalize the community park succeeded in reducing crime. They added events and live music, Tai Chi classes, basketball and gardens to positively activate the space. Their focus is on improvements that celebrate the “heritage, culture, and cuisine” of the diverse groups who call George Town home.
Much of the housing stock is in need of repair, and Think City has been working with landlords and tenants on a program that allows for collaboration in making home

repairs by ensuring stable rent for the tenant if they help to fix up the property.
And these little, step-by-step efforts have been working.
There is still much work to be done, but the efforts have been inspiring other efforts and it is making a difference.
Kuala Lumpur is the capital city of Malaysia, whose downtown Ping said was devastated by the movement of government buildings to the outskirts of the city.  The move was a hard blow to the businesses who depended on the workers to be their customers and the downward spiral went on from there. 2015 stats show that by day the downtown still had over 57,000 jobs.  But by night the population was just 3,792 residents, of which 73% were single males, mainly migrant workers.

“The city was desolate at night,” Ping said.
As in George Town, creating a sense of place was part of the solution. What could make people want to stick around after work? What would help facilitiate friendships on lunch breaks, or evening strolls?
Laneways seemed like a good place to start.
What Americans call alleys, Malaysians call laneways. And those laneways are the places people gather, particularly to grab food from local vendors.  During the day the merchants in the laneways would serve street food, but there were not really pleasant or clean places.
Think City helped redefine these spaces, with clean-up efforts, public art, benches, tables and chairs.  They fixed holes in the pavement and even built a

little stage designed for buskers.
These efforts included the neighbors and workers in the area, giving them a chance to be drawn into community revitalization efforts.  Murals that involved the public, with a paint-by-numbers kind of method, were particularly engaging.  They gave people something they could always walk by and remember being a part of.
Ping reflected on how this kind of interaction proved to be much more effective than town halls or other official-sounding meetings.  “Town halls only serve those who are courageous enough to speak,” she said.
Fixing up the laneways encouraged even more use of the spaces, and some of the workers began to see the potential of living in the city.
A program called Arts on the Move helped inspire bigger dreams in the community as well.  “We took over the concourse of the mass transit center and filled it with art and performances,” Ping said.
But repairs and painting alone were not enough. Strategic investments were necessary to get the momentum started.

“You can’t revive a city if you don’t have young people,” she said. So they began to invest in converting abandoned office spaces into living spaces, and working with property owners to encourage affordable housing.  Subsidies helped low income people find stable housing while also growing the community. Another successful project took an old building and made it into a creative hub of studio spaces which now has a waiting list for artists to get in.
Think City has worked on a variety of placemaking, community-building projects such as community gardens, a green-roofed bus shelter, façade improvements, roof repairs and other historic restoration, art installations and events.  And after ten years and over 725 projects across the country, they have seen how the efforts make a difference in the lives of the people who live and work around them.
Ping also emphasized the need for those who work on fixing up an area do it in a way that has a “focus on being authentic.”
“There’s a community that lives there, and they’re important,” Ping said.
The Think City website has more about their efforts, and examples other cities can learn from.
Here’s a video about Think City’s efforts:

*******
This article is part of a series about the Michigan Municipal League’s 2019 Convention that took place in Detroit Sept. 25-27. We will be sharing articles from the convention over the next few weeks to help readers better understand the issues local governments face. If you aren’t already on our list for Daily Headlines, please sign up HERE so you won’t miss any of this exciting and informative series! Find other MML related articles HERE.
For more on Michigan Municipal League, check out their website at http://www.mml.org. 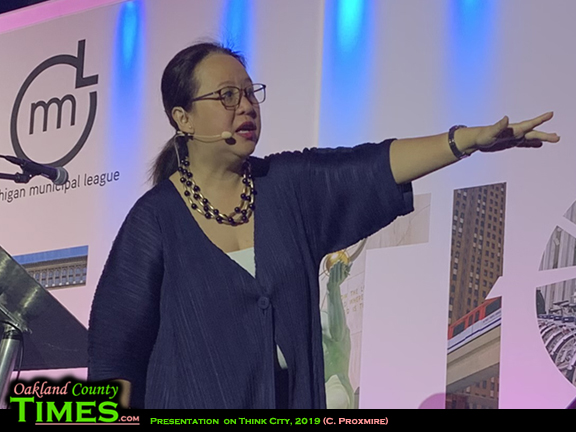