Allen Park Serve as Examples of Governmental Social Media Savvy
(Crystal A. Proxmire, Nov. 7, 2019)
Ferndale, Holly, MI- Some local governments stay firmly away from the chaotic, rumor-filled world of social media. But other communities embrace it, such as Ferndale, Holly, and Allen Park who serve as examples for cities across the state.
Village of Holly DDA Director and Assistant Village Manager Kay Golden, and Ferndale Communication Director Kara Sokol were on a discussion panel along with Allen Park Police Detective Jim Thronburn at the recent Michigan Municipal League Convention held at the

TCF Center in Detroit. Their ideas and experiences were heard by elected officials and administrators from around the state.
For Golden, social media has been a tool for promotion and to bring the community together. While tough topics do come up, she ensures that the Village’s web presence is full of positivity and engagement.
On Wednesdays she posts “Where is it Wednesday” pictures that show details of Holly buildings or places, and community members jump at the chance to give their guesses and share their memories and experiences that go along with the locale.
On Thursdays she posts “Throwback Thursday” pictures or articles that reminisce about the community’s past. For an historic village like Holly, the sense of history and place is a common thread for many of the residents to feel proud of.
She also takes the time to learn the anniversaries of the local business, and schedules

“congratulations” posts to honor them.
And sometimes the opportunities just present themselves. In her presentation she included a post from Oakland County Times where a trio of Sandhill cranes were wobbling carefree through the parking lot of a local pub. “A couple days later I went to Jay’s Bar and Grill and said ‘you’re famous.’ They said they’d seen an uptick in business, with new customers coming in and people making comments about the birds.”
Golden’s tips for other communities?  “Tell your story.  Be factual. Be fun,” she said.  “You can change the culture.”
While it wasn’t part of this presentation in September, Holly’s social media skills really shined in a recent online contest through National Geographic, which netted the community a $150,000 grant to help relocated and preserve the village’s Union Depot.  The contest required online votes, and plenty of social media promotion.

For Sokol the approach has been more reactive and responsive to an already heavily internet-engaged community.
Ferndale has a plethora of Facebook groups, most of which formed before she joined the city staff four years ago. The number of people in the groups far exceeds those who “like” the City’s official Facebook page. At the time of the presentation there were 5,800 like on the municipal page, compared to 7,600 in the Fabulous Ferndale Forum, and 15,000 in the Ferndale Forum.
“People were asking questions in the groups. The groups were totally eclipsing any communication on the city pages,” she said.
At first the city was hesitant to let Sokol dive in.  But she told them that in order to be effective, they had to “reach people where they are.”
“We’re going to join these groups and invest our time being in the groups,” she said.  “I’m with you that answering the same questions over and over is tiresome, but the people asking the

questions in the group aren’t going to call me and ask.”  She explained that good communication was more than just putting out information and expecting people to find it, it’s about having a local government that is truly responsive to the people’s needs.
Sokol decided to focus on the two groups that had the most members, and takes care to correct false information or answer questions as she sees them.
She’s also been helping to set expectations.  Previously people would tag the mayor and other local officials in their posts.  “These are people with full time jobs,” she said.  So she began jumping in to respond instead.  “After a few months they learned not to tag the mayor or council, but to tag me instead.”
Some other tips were to use everyday language and be relatable.  “Don’t say ‘utilize,’ say

‘used,’” she advised.
In spite of all the communications challenges to tackle, the City of Ferndale does have fun on social media too.
One recent, humorous, success was an attempt to raise awareness about grass cutting and the ordinance that requires lawns be kept trim.
To make their point they took a picture of a code enforcement officer named Colin, kneeling in tall grass and looking displeased.  This came about because Colin had asked Sokol to help spread the word about what the lawn ordinance after seeing a spike in noncompliance.
“I said, you know, we could share the ordinance info.  Or we could get you out on a lawn and take a picture,” Sokol said. The premise was “let’s make Colin happy.”

“Our community went bananas,” she said.  The hashtag #makecolinproud sprouted up with Photoshopped memes of Colin in various places and circumstances through the city. When other community discussions came up, such as weeds in the median of Woodward or women covering their nipples with bandaids at the Ferndale Pride festival, residents went to work photoshopping Colin into memes about the issues.
In Allen Park, Thornburn’s posts focus on building the relationship between the police and community, as well as using Facebook as a tool for solving crime. The cover photo on their Facebook page features kids playing at National Night Out, and their page features police interacting with residents, including a water balloon fight.

“A lot of police pages are boring and just the facts,” he said.  “Make it fun.”
He suggested avoiding topics like race, politics, marijuana, and Narcan.  Guns are also a topic that triggers negative responses.  “You can show a meme about pumpkin spice handcuffs, but don’t share one about a pumpkin spice glock,” he said.
Some things that do work to create positive engagement, Thornburn said, are sharing community events, hosting cop on a block events and posting pictures from it, police training, and “tales from the front row” stories about things they experience on the job, both serious and fun.  When they built a new jail, the department dubbed it the “Allen Park Bed and Breakfast,” which amused many of their fans.
“If you post fun things, you get views. Then when you need the community, they’re already watching.”

That’s how social media helps him “look like a great detective.”  He explained that when police have a criminal’s face caught on camera, sharing the picture is a great way to get leads.  “A relative calls up who doesn’t like these people, and now they have court dates,” he said.
On the flip side, police must also deal with the ramifications of people posting information about crimes in social media groups.  “Community pages give wild, inaccurate info so many times,” he said.  Though he can’t control what people put out on social media, he urges those who moderate groups to limit postings about crimes, especially those that show faces of people who may or may not have done anything wrong, to those put out by the police departments themselves.

In cases of death and tragedy, professional news media know to wait before releasing certain details so the police and notify family members.  But social media does not have the same professionalism.
“We had a case where somebody killed themselves by a school.  The guy had kids at the school and who worked near by. You don’t want to find out your dad killed himself while you’re at work at Taco Bell and it comes up on your phone,” he said.
Instilling that kind of awareness is an ongoing challenge, but being active on social media means the police can have those kinds of conversations with residents.
Another big challenge in social media management is what to do about the nasty comments.
The debate comes up in local governance whether official social media pages should delete comments or not.
Thornburn is on team filter.  “I do delete comments,” he said.  “If someone wrote ‘all cops

suck’ on the wall of City Hall, you wouldn’t leave that up. This page represents us.”
When Chick-fil-A was opening a location nearby, he deleted comments that were negative about the chain because he didn’t think they were relevant to the restaurant’s opening celebration.
Golden and Sokol have both taken the stance of hiding irrelevant comments, but not deleting them.
Sokol said cities take multiple approaches.  “Some never delete,” she said.  “Some delete if it is off topic.  You can set up your comments to automatically hide if certain words are used. And you can hide, but not delete. Lots of communities turn off comments.”
The courts are still fleshing out the rules and responsibilities of governments in regard to social media.  Officials must be mindful not to engage in online discussions that might violate

the Open Meetings Act, and they must stay up to date on the rules in terms of their rights and the public’s rights.
Ambiguity in the rules should not prevent communities from engaging online, however.  “If you’re not on Facebook, you’re not using a huge resource that you have,” Detective Thornburn said.  “There’s more promise than not.”
The Michigan Municipal League offers sample social media policies local governments can use for their employees to clearly define their approach and keep staff on the same page.
*******
This article is part of a series about the Michigan Municipal League’s 2019 Convention that took place in Detroit Sept. 25-27. We will be sharing articles from the convention over the next few weeks to help readers better understand the issues local governments face. If you aren’t already on our list for Daily Headlines, please sign up HERE so you won’t miss any of this exciting and informative series! Find other MML related articles HERE.
For more on Michigan Municipal League, check out their website at http://www.mml.org. 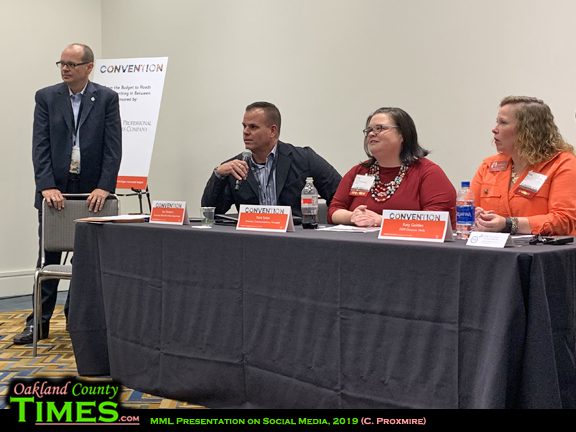 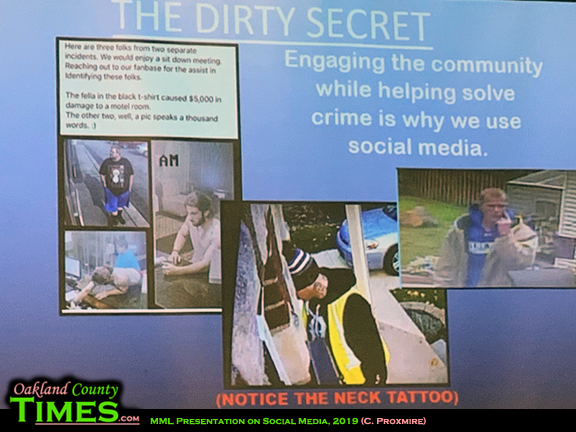 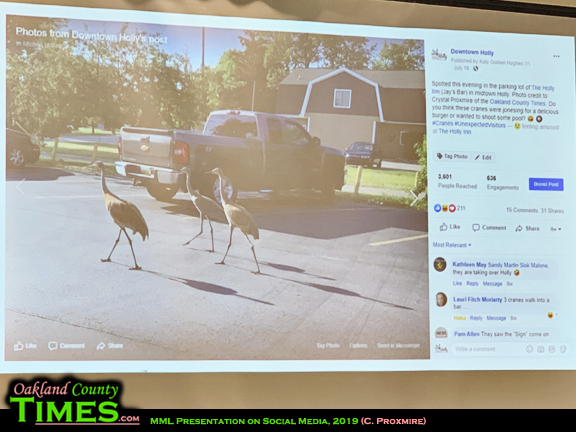 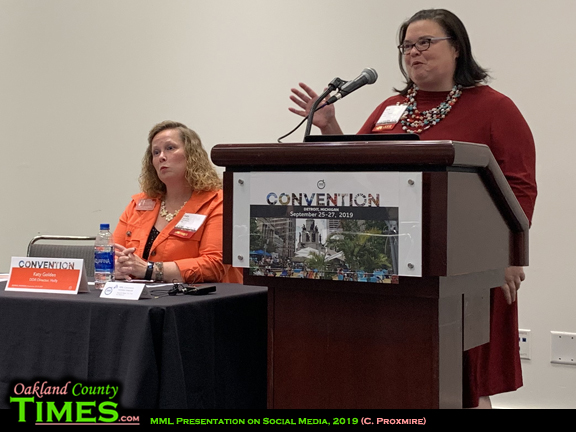 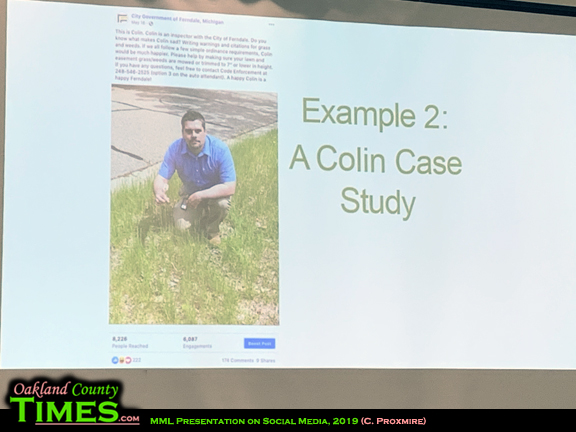 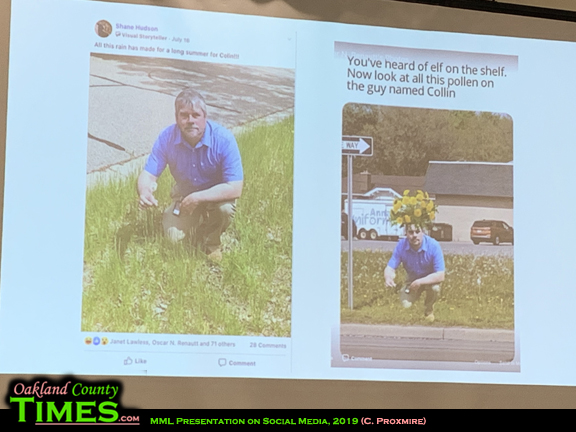 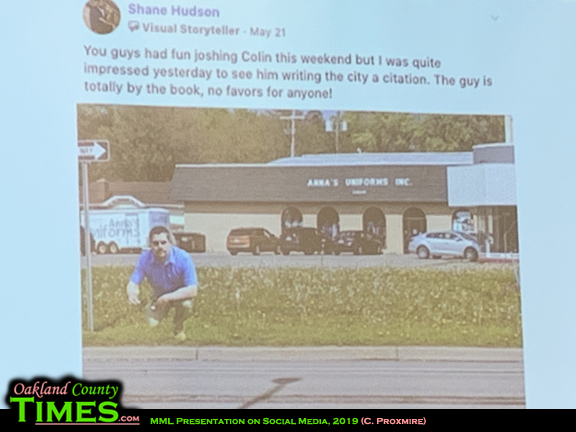 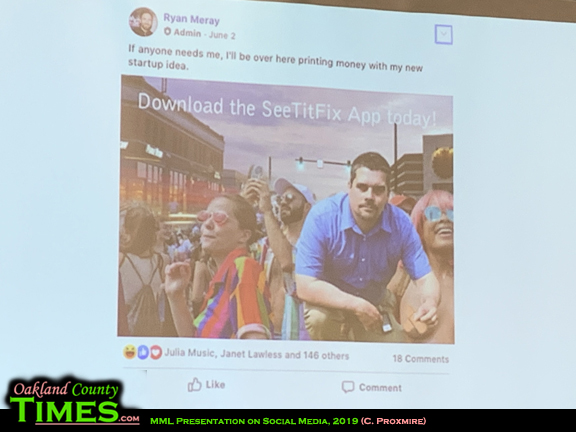 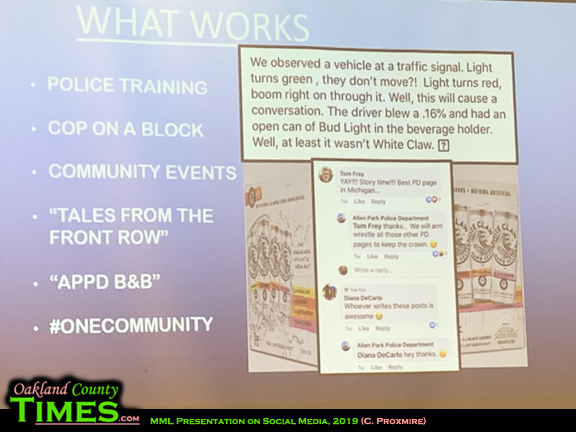 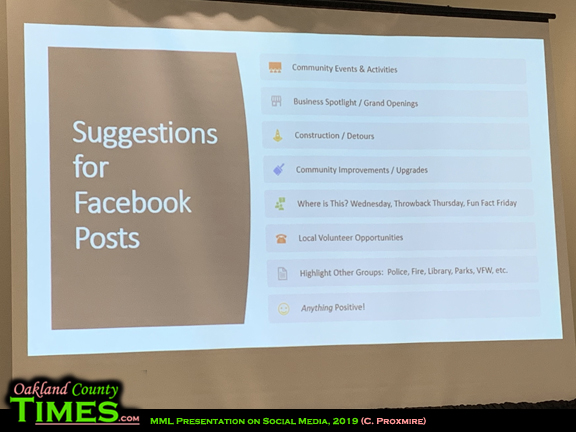