(Carey Gustafson, Oct. 28, 2019)
Detroit, MI- A visit to Cass Tech High School Sunday rocked for Presidential hopeful Bernie Sanders as he and thousands of supporters enjoyed a performance by Jack White, as well as local artists Passalacqua and Supercoolwicked, and the Cass Tech Marching Band.
White told the 4,500-person crowd it was his first political rally, but he came out because he supported Sanders’ opinion that the Electoral College ought to be eliminated.  “I have this silly notion that the more Americans that vote for somebody, that person should be president. Isn’t that kind of funny?”
A dozen or so protesters gathered across a side street holding up signs. But inside the energy was as you might expect when combining politics and rock and roll, with excited supporters

and onlookers spilling into the hallway
“This is what Democracy looks like!” was chanted across a roaring crowd.
Jack White, his long-time friend and Third Man Associate Ben Blackwell (The Dirtbombs), Jack’s Bass player from his recent touring gave a half-hour concert.
They played a mix of solo material and plus White Stripes songs, “We’re Going To Be Friends” and “Seven Nation Army.”
Michigan Congresswoman Rashida Talib spoke around 15 minutes and had everyone fired up, introducing candidate Bernie Sanders, who the stage around 5:40pm hand in hand with wife

Jane Sanders. After the crowd settled in Sanders joked he was going to introduce them to ‘the next First Lady of the United States, but she left.’ The crowd erupted into laughter and she returned to join him, wave and exchange a kiss before heading back into the wings.
Sanders spent a few minutes playing tribute to Michigan Congresman John Conyers who died that day at age 90. Teachers work and wages were a main topic of discussion, as they were gathered at the school.
The Presidential hopeful had also visited Michigan in April, focusing on his plan of “Medicare for All.”
Learn more about Sanders and his campaign at https://berniesanders.com/
For more on next year’s election, visit our 2020 Election Section. 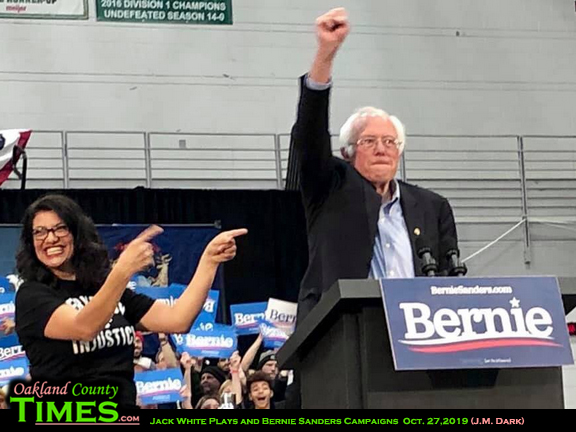 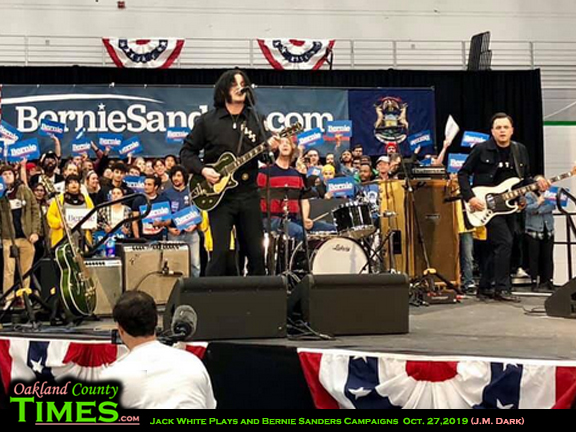 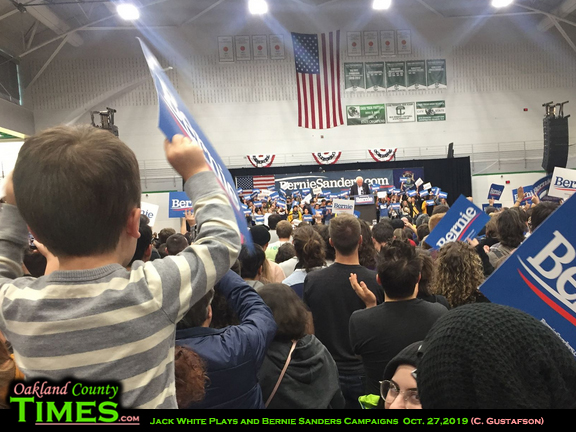 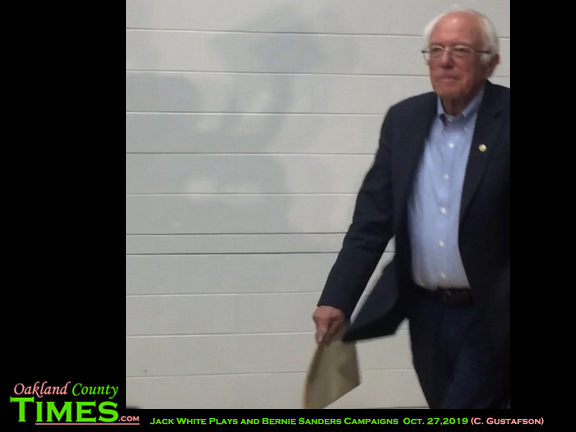 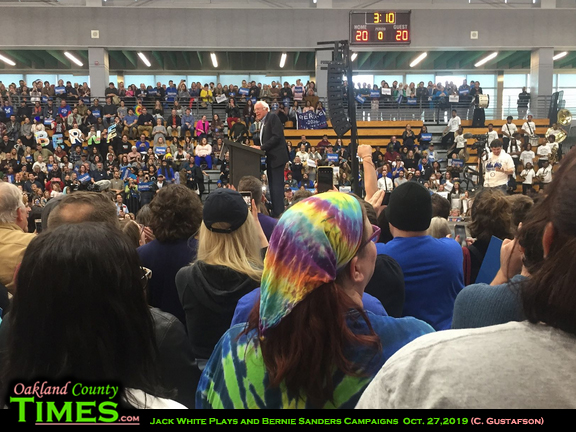 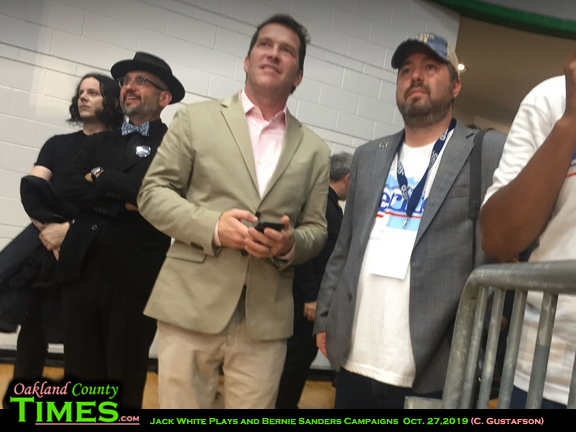 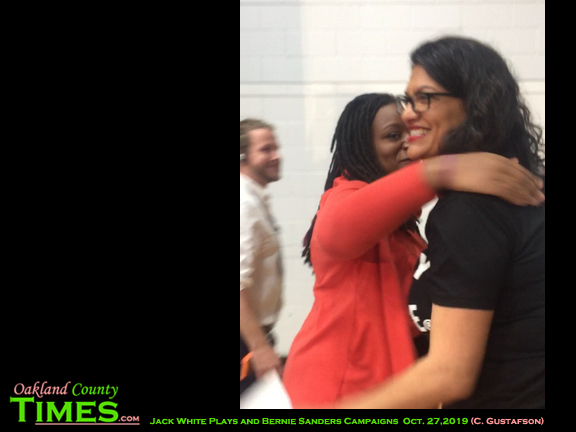 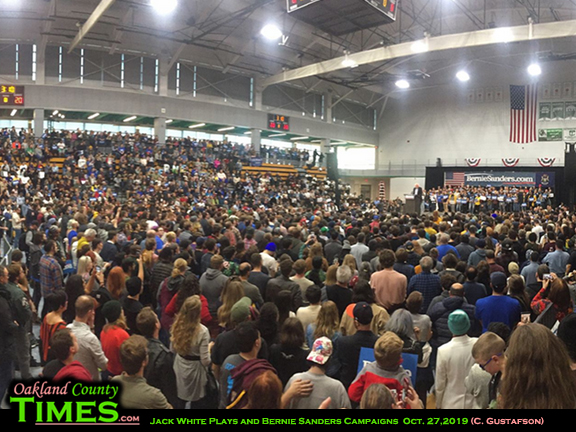 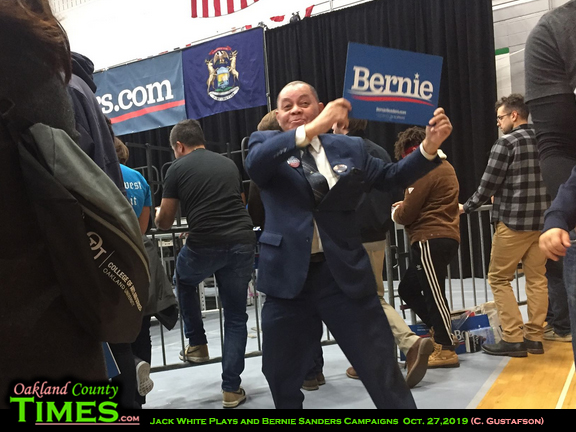 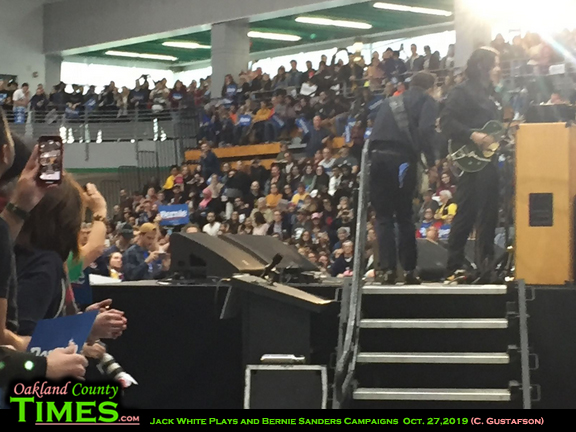