“Kaleidoscope of Expression”
(Crystal A. Proxmire, Oct. 20, 2019)
Pontiac, MI- Like the various shapes, colors and patterns that are part of a kaleidoscope, the artwork created and inspired by the LGBTQ community doesn’t just form a rainbow, but an ever-changing mosaic.
This was celebrated Oct. 12 at the Pontiac Creative Arts Center with their first “Kaleidoscope of Expression” art show opening reception.
Poet Michelle Brown of Southfield shared that this year is the 50th anniversary of the Stonewall riots, as well as many events that revealed an opening up of humanity and change.

“There have been artists, writers, and thinkers who kept their work silenced before stonewall,” she said.
“There was something in the air in 1969. If you were black you were saying ‘I’m black and I’m proud.’ If you were a woman you said ‘I am woman, hear me roar.’ And if you were part of this community you said ‘We’re here. We’re queer. Get used to it.”  She explained that through history art has helped society deal with change.  The show featured works in different media, by artists across ages, genders, races, and orientations.
Cai Steen of Rochester is a recent College for Creative Studies graduate who submitted a series of necklaces created as part of a senior thesis project.  Each one was different, but had the theme of a house shape worked in.
“I talked to people about the homes where they grew up,” Steen said.  “and I

designed based on the stories they told me.”
Each piece is named after the street the interviewee grew up on. Glenway Drive, which won first place in the show, came about after talking with a friend about her childhood home.
“She grew up on the outskirts of the city, in a house surrounded by trees. And she felt very safe, and comforted by the trees.”
The project helped Steen grow beyond the exclusive use of metal, now incorporating other textures and materials into her jewelry design.
Nick Szydlo of Studiowerq in Hazel Park was one of the jurors for the show.  “We were definitely looking for work that is technically good and innovative,” Szydlo said.  “I really wanted to look for work that is expressive of the LGBTQ experience, but not in a way that’s obvious… I like art that is layered.  All of the ones we picked we talked about for a long time.”

As far as Steen’s Glenway Drive, it resonated with Szydlo because issues of housing and complications of home life are prevalent in the LGBTQ community where people are kicked out by their parents, face housing discrimination and instability, those who can only be their true selves within the walls of their own home, and even those who have to hide even inside the place they live.
“A lot of people create their own families and their own homes in a really conscious way,” Szydlo said.
Robert Craner of Pontiac grew up in a supportive home, with a father who nurtured his creative spirit and didn’t mind if he played with dolls.  Now, decades later, making them is both a passion and a profession.
“They’ve always fascinated me.  There’s something magic about them,” Craner

said. Several of his dolls, posed in scenes, graced the Kaleidoscope of Expression, donning wide eyes and intricate costumes.  Craner worked as an art teacher while also selling his dolls at galleries.
Roger Meeker of Rochester Hills has also focused on humans as inspiration.  His bronze casting of a female torso, and a gender-neutral sculpture of a torso carved in with intricate spaulking were on display. Spaulking is when a tree becomes infected with mold and begins to decay. At the earliest onset, it leaves thin black lines like lace through the wood.
Meeker said lately he’s been taking different classes to learn new techniques.  “The more you keep involved, and keep learning, the more you enjoy it,” he said.

The exhibition was put together with support from Oakland University and the City of Pontiac.
Derek Queen of Troy lent his graphic design expertise to the effort. Queen created a logo with seven varied shapes and colors close to those of the rainbow, but not in traditional R.OY.G.B.I.V. order.
“The colors are still there, but it’s this idea that the pieces aren’t all the same, and they aren’t all in perfect lines.  A kaleidoscope is a mix.”
The second place award went to Andrew Lathrup  whose thoughtful tables give the eyes unusual details to dwell on.
Third place was a trio of paintings by Janice McCoy featuring a mouth and stereotypically unpleasant creatures such as hornets, flies, and scorpions.
The exhibit runs until Oct. 26 at Pontiac Creative Arts Center 47 Williams St, Pontiac, MI 48341.  Find out more about them and check out upcoming events at http://www.pontiacarts.org/ 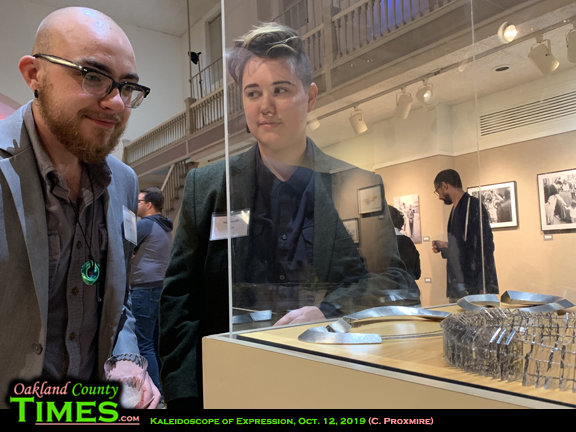 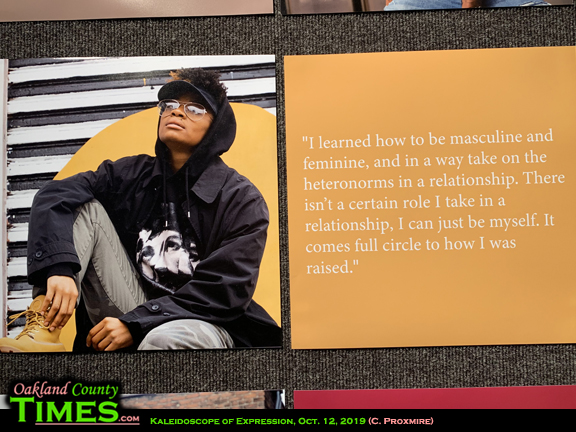 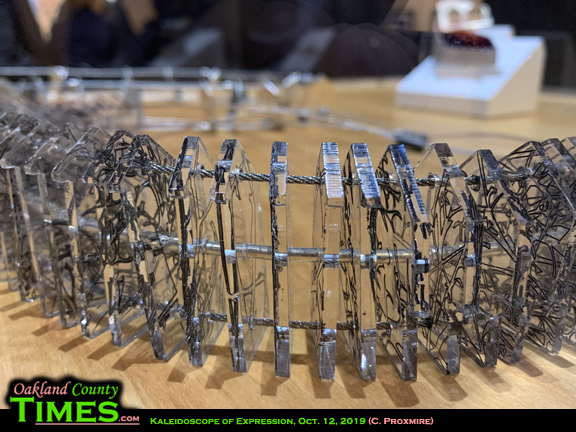 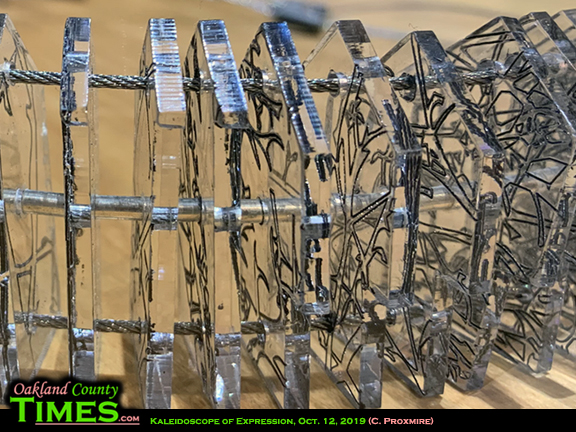 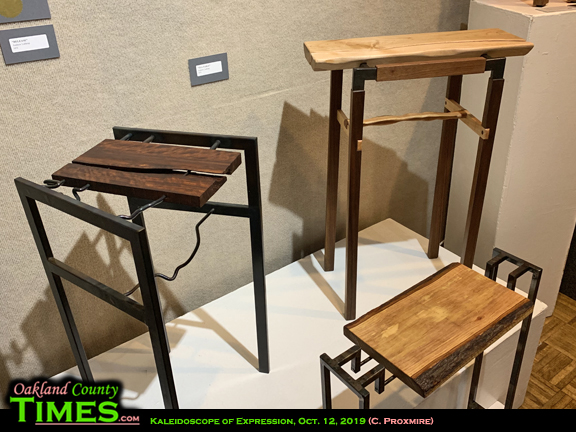 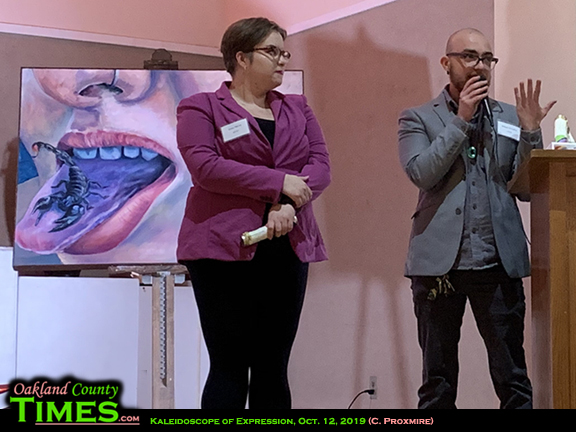 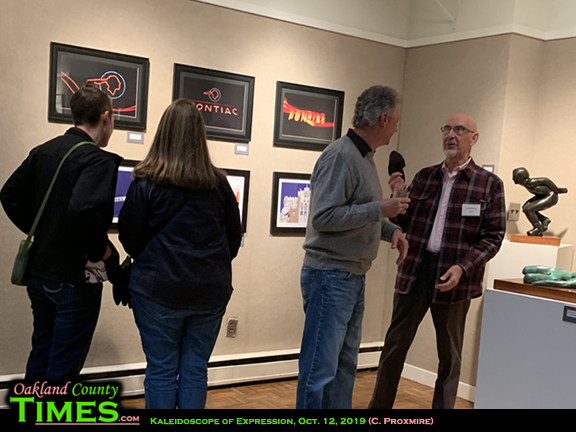 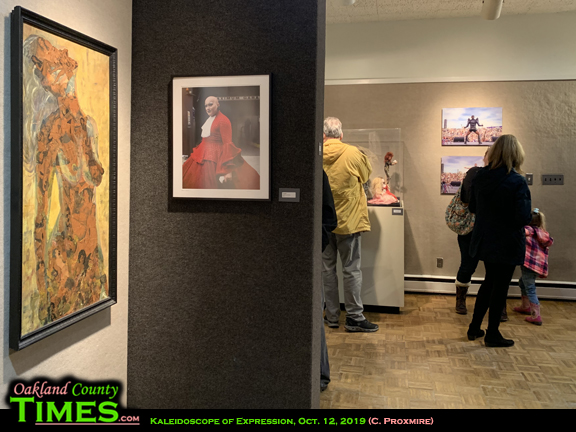 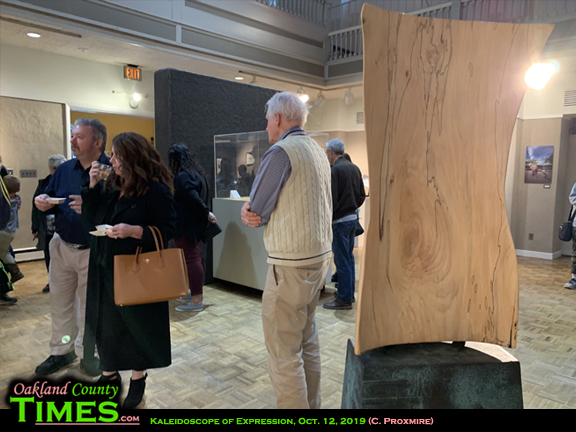 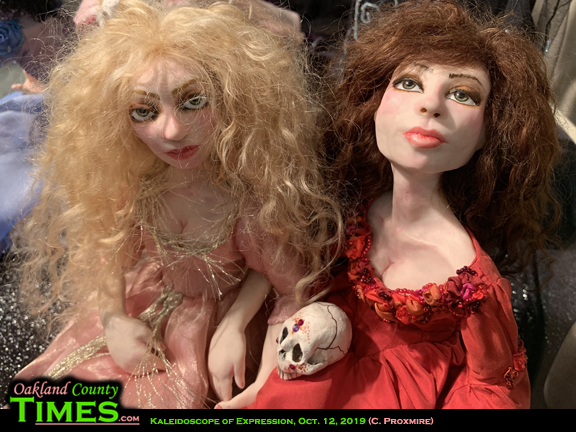 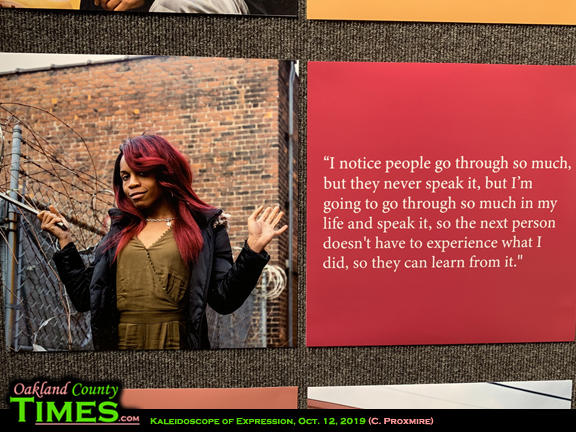 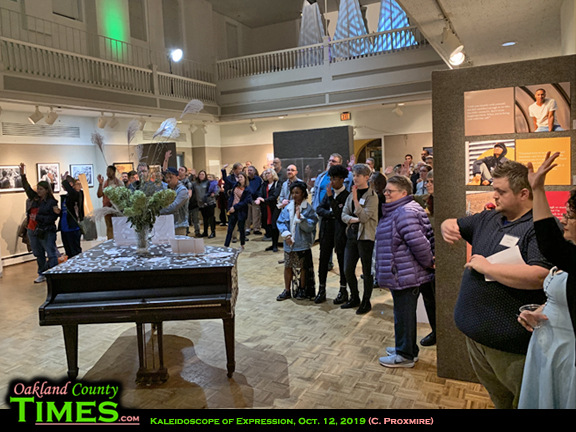