Workers Live
(Kurt Metzger, Oct. 2, 2019)
Ferndale, MI- Newly released data from the Census Bureau allow us to gain an understanding of the job commuting characteristics for any community in Michigan (or the U.S. for that matter).
I chose to look at Ferndale as a way of understanding the commuting flows of both its residents and its workforce.  As we reengage around regional transit – now that Ferndale’s former Mayor is in the Oakland County Executive’s chair – it is informative to understand the relationships we have among communities in Southeast Michigan.
Figure 1  (scroll down) illustrates the major work locations of Ferndale residents, while Figure 2 shows where Ferndale workers live.
The first thing to notice is that Ferndale ranks 4th as an employment location. The City of Detroit employs almost 1,700 Ferndale residents – almost 2 ½ times that of the city itself.
This is

followed by the major employment hubs – Troy and Southfield.  While Oakland County communities dominate the list, Wayne (Detroit, Dearborn and Livonia) and Macomb (Warren and Sterling Hts.) counties are definitely in the mix.
Looking in the reverse direction results in Figure 2, illustrating where the people who work in Ferndale live.  Once again, we see Detroit at the top – employing 13.1 percent of all Ferndale residents who are employed.  This time, Ferndale comes in second with almost 10 percent.  While several of the same communities show up on this list, a number have dropped off while three new ones have been added – Hazel Park, Oak Park and St. Clair Shores.
The Census helps us understand our communities better, and understanding commuter patterns can help make decisions about public transportation, housing, and workforce development. 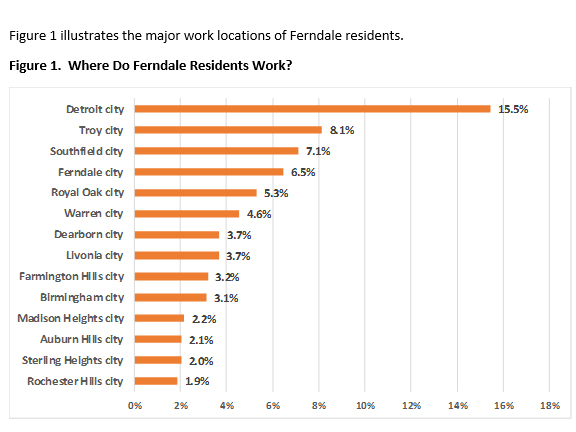 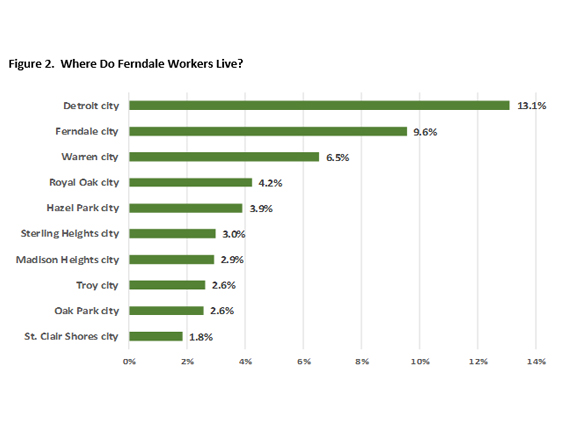