Marijuana Zoning and Vester Square Site Plan
(Crystal A. Proxmire, Oct. 1, 2019)
Ferndale, MI – Wednesday’s meeting of the Ferndale Planning Commission has two public hearings. The first is a marijuana zoning ordinance amendment that would allow for recreational marijuana retail establishments. The second is in regards to a mixed use development at 621 Vester, 600 Vester, and 1938 Burdette.
The public hearings are the time for the public to weigh in on decisions that the Planning Commission will make.
~Marijuana~
The Planning Commission will be considering the allowance of recreational marijuana facilities in areas currently zoned to allow medical marijuana.  The

staff report included with the agenda summarizes as follows:
“City Council directed staff to consider amendments to the City’s marihuana ordinance after Michigan voters approved Proposal 1, the Michigan Regulation and Taxation of Marihuana Act (MRTMA), on November 6, 2018 to legalize recreational marihuana. This is in addition to the medical marihuana uses already lawful by virtue of the citizen’s initiative approved by voters in 2008 and the regulatory statute, Michigan Medical Marihuana Facilities Licensing Act (MMFLA), Public Act 281 of 2016.
The Planning Commission held a discussion and reviewed a draft ordinance at the March 6, 2019 meeting, but no action was taken by the Commission. Feedback was given by the Planning Commission and interested community members and business owners. The Planning Commission generally supported the direction from those draft ordinances related to applicable

zoning districts (M-1, M-2, and OS), allowing co-location of provisioning centers and retailers, and keeping the 500 feet buffer distance from schools, nursery schools and state licensed day cares.That feedback and updated information from the State of Michigan has been incorporated to new draft ordinances.
Staff has included draft amendments to the City’s regulatory ordinance (Sec. 7-410) for the Planning Commission to review. However, the regulatory ordinance would only be voted on by City Council, since it is separate from the zoning ordinance. The recommendation in the zoning ordinance includes three(3)licenses for marihuana retailers. The regulatory ordinance would confirm the total number of licenses the City will permit, and include the license process, license fee, etc.”
It goes on to explain that only those with a MMFLA license will be able to apply for a retailer license for the first 24 months that the State accepts

licenses. Also cities cannot accept applications until after the State begins accepting them which will be by December of this year. However, cities can have their ordinances in place and ready to go.
If the State does not have rules in place by Dec. 6, applicants may apply directly to cities for a municipal license which the city has up to 90 days to consider.
Ferndale currently has three medical marijuana provisioning centers approved. Two are open and one will open within the next four weeks.
The City set the rules to only allow three medical marijuana dispensaries. There are seven applicants in the queue that have been approved by the state. Should any of the current businesses close, the city could consider the next

applicant.
Staff is recommending limiting the recreational licenses to three as well. They’re also recommending  a 500 feet distance requirement from a marihuana retailer to an educational institution, nursery school, or child care center, or another marihuana retailer facility, provisioning, center or medical marihuana facility. The distance requirement shall not apply to a marihuana retailer licensee that has a provisioning center license and trying to co-locate.
~Vester Square Site Plan~
Vester Square is a proposed development along the railroad tracks,  in the neighborhood behind the East 9 Mile CVS which includes Incubizo and

Voyager restaurant.
The Staff Summary explains:
“The applicant, SOMI Holdings, proposes to construct a phased development with adaptive reuse of existing structures and new buildings on properties 621 Vester, 600 Vester, and 1938 Burdette.
The property is zoned C-2 General Commercial. The applicant is seeking site plan approval for permitted uses in the C-2 district, as well as special land use for restaurant with outdoor seating.
Developments include an addition to 600 Vester (currently occupied by Voyager restaurant), mixed-use development with upper floor residential,

proposed retail and restaurant at 621 Vester with additional restaurant and retail building.
The site design also features an open space with greenspace, seating, and lighting.
The applicant is also looking to vacate two portions of a historic alley currently located on the existing property, some of which is currently inhabited by the existing INCUBIZO building at 1938 Burdette. In addition, the applicant is looking to vacate the utility easement of the previously vacated Vester St. east of Burdette St. City Council will consider these items at a future meeting, but staff wanted to make the Commission aware of the request.”
The applicant requested a waiver for parking.  The Staff Report explained, “The applicant provided a letter describing the parking reduction request for 31 spaces. The applicant cited shared parking by multiple uses, on-street

parking spaces within 500 feet, expectation of walk-in and bicycle-in business, adjacency to transit and bike lanes within 400 feet of the proposed development as factors in the request.”
The site plan gives details about the buildings, the parking, the uses, the facades, and the landscape.
The public is welcome to attend the meeting, ask questions, and comment.  More information can be found on the City of Ferndale website:
Marijuana Ordinance
Vester Square 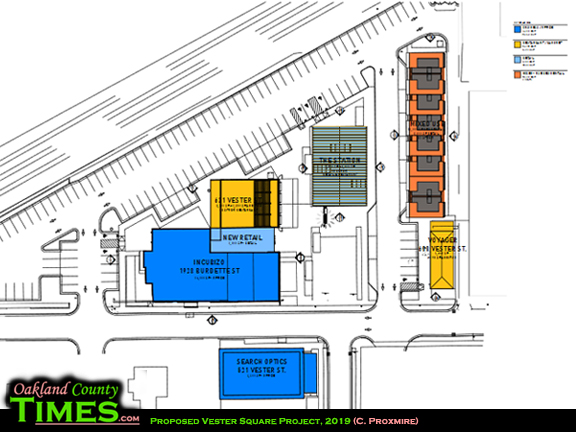 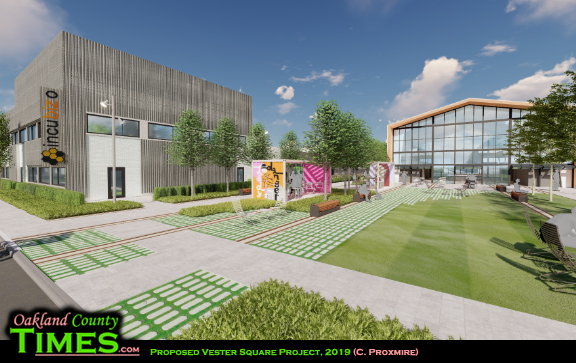 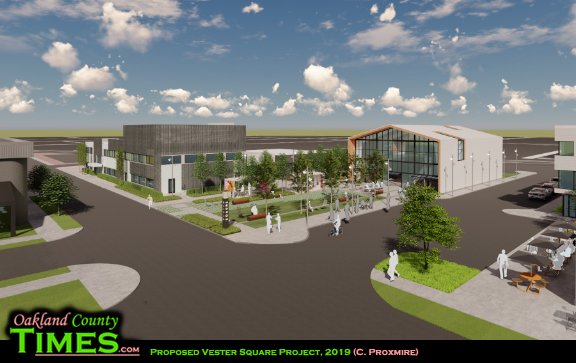