(Mark Stowers, Sept. 28, 2019)
Pontiac, MI- Barry Sanders scored 54 touchdowns in the former Pontiac Silverdome, but the site of Super Bowl XVI is about to get a real-life Hail Mary. Amazon is coming to Oakland County – and in a former NFL coach and color commentator John Madden way. The e-commerce company has plans to build a distribution center that will provide more than 1,500 jobs and construction costs will be $250 million (or the price of a top NFL player’s contract).
The Silverdome opened in 1975, with seating for 82,000 people.  It was permanently closed in 2013 and demolished in 2017, leaving the 127 acre property prime for a big development.  And speaking of “Prime,” it was Amazon that stepped in to take the spot.

During the September 18th Pontiac Planning Division meeting, members approved a special-exemption permit for the site to be used as a warehouse, distribution and fulfillment campus.
Two buildings are planned for the site including a five-story fulfillment center with 3.5 million square feet and also a one-story delivery center with 200,000 square feet. There would also be more than 2,100 parking spots for the two buildings. It would be Amazon’s first location with both fulfillment and distribution sites. Construction estimates being finished by 2021.
Pontiac officials say the development will bring 1,500 jobs to the community, starting at $15 per hour.

According to various reports, Seefried Industrial Properties is under contract with Amazon to buy the land and build the facilities for the online retail giant. If all goes well, Amazon will be ready to move in by the end of 2021.
Previous stories:
Exploring the Pontiac Silverdome (Video) (Jan. 29, 2015)
Red Bull Promotes BMX Ride Through Silverdome (video) (June 9, 2015) 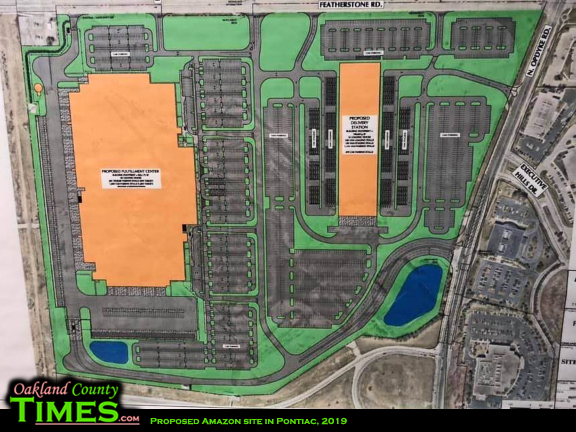