(CP Proxmire, Aug. 5, 2019)
Ferndale, MI – Dennis Whittie was appointed to Ferndale City Council Monday evening, filling the vacancy that came about with Melanie Piana’s resignation to run for Mayor.
Whittie was one of four residents who applied to fill the seat until the end of this year. He’s also on the Nov. 5 ballot for the 2 year balance of the term.
Whittie is an attorney who also is an emergency management coordinator with Henry Ford Health System.  Previously he’s worked as a police officer in Hamtramck and River Rouge, and he’s been an Emergency Medical Technician.  Among his degrees is a law degree, and a

Masters in Public Administration.
Councilperson Greg Pawlica made the motion to appoint Whittie, recalling that they had worked together to pass a new City Charter in the late 1990s, and many times since. For him the decision came down to continuity. Two of the applicants – Whittie and Kat Bruner James – are on the Nov. 5 ballot, but Whittie is running specifically for that seat, while Bruner James is seeking a full four year term.
Mayor Dave Coulter supported Whittie’s appointment, reiterating the value of his public administration degree, and also calling Whittie a “sincere person” with “a police officer’s sense” of being able to diffuse conflict, and a manner of speaking to anyone with the same open personality.
Coulter was impressed that each of the candidates possessed a legal background.  “I was

hoping some attorneys would apply,” he said noting that the last time an official was on council with a legal background was Scott Galloway who served until 2013.  “we’ve missed something not having that legal perspective.  I wanted an attorney, and we got four of them.”
Kat Bruner-James, Collin Garcia, Sherry Wells, and Dennis Whittie were the applicants who were considered Monday evening.  Each spoke about their experience and why they wanted to serve.
“I firmly believe that young people need to stand up and start making a difference,” said Garcia who spent several years living in Japan before moving to Ferndale. “I’m tired of people complaining on social media and not doing anything.”

Wells also worked to help pass the Charter change, as well as being active in discussing issues through the years.  She spoke about donning her vintage Art Deco 1920s “Fern Dale” costume and sharing Ferndale history while also helping to have historical plaques put on buildings in the Downtown.
Bruner James is a Civil Rights attorney who Chairs Citizens for a Fair Ferndale and has been active in many initiatives over the years including Instant Runoff Voting (also known as Ranked Choice Voting.)  She spoke of having rented a house with college friends before buying a home of her own, and then of being a parent – and how each circumstance has given her a variety of experiences to draw upon if selected.
Councilmember Raylon Leaks-May said the decision was “grueling” because it was such a difficult choice, noting that she has been out knocking on doors for Bruner James.  But in the end, continuity of the seats tipped the decision in Whittie’s favor.

Seeing the applicants, and knowing the number of people running for office this year, has Councilmember Dan Martin feeling content about the future of the city. He decided not to seek re-election at the end of his term.  “One of the reasons I’m comfortable not running this year is we have wonderful people [running],” he said. “I would take any of you.”
On Nov. 5 Whittie is on the ballot along with Rolanda Kelley, Laura Mikulski, and Maryanne Wessels for the two year term.
Former Councilperson Melanie Piana is running for Mayor, as is Brian Stawowy.
There are two seats for City Council with a full four-year term. Candidates for that race are Ben Buttolph, Nada Daher, Augusto Flores, Kat Bruner James, and incumbent Councilperson Raylon Leaks-May.
Whittie’s swearing in was the last item on the agenda, giving him just a few minutes in the big

comfy seats on the Council dais.
“It’s a different perspective sitting at this end of the table, I didn’t know there were these TV screens here,” Whittie said. He also gave a round of thank yous to the other applicants and candidates.
More information on local elections:
Oakland County Clerk
Michigan Secretary of State
Oakland County Times Nov. 5, 2019 candidate interviews
Oakland County Times 2019 election news page
Support local journalism by joining our Readers Club 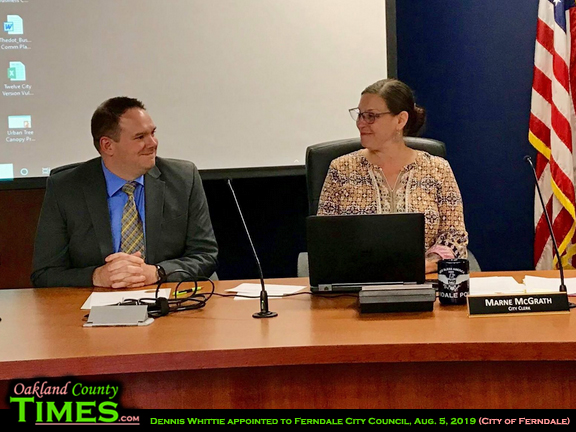