New Welcome Signs to Grace Holly’s Main Roadways
(Lara Mossa, July 16, 2019)
HOLLY – The Village of Holly will be sprucing up the community with new signs and a cheery message – “Holly Welcomes You!”
Five signs are planned for the entrance points to the village with the possibility of a sixth being bought in the near future. The signs will replace the existing wooden structures that are already in place. The project is a joint effort between the Holly Downtown Development Authority and the Village Council.

Village President Tom McKenney drove the initiative and said that “Our signs at the entrance points to the Village are our community’s ‘front door,’ and reflect the image of the Village.”
“We would like to warmly greet our residents and visitors and believe that these replacement signs evoke a sense of place and exude a ‘Welcome Home’ feeling,” said Katy Golden, DDA Director and Assistant Village Manager. “Our image is important to us and these signs reflect the timeless appeal and hometown feel of Holly.”
The signs will cost $14,500 each including installation and removal of the old structures. The DDA and the Village Council will each pay half the cost. Three signs will be replaced this year, and two will be replaced next year.
The first five signs will be placed at Grange Hall Road east near the entrance to the Villas of Riverside condo complex; Grange Hall Road west near Hawaiian Gardens; North Holly Road near Holly Middle School; Maple Road near Karl Richter Center and Broad Street near WaterWorks Park. The sixth sign is planned for Academy Road.  The new signs won’t be installed until later this year.
“We’re very excited about these new signs which reflect the spirit and enthusiasm which is alive and well here in Holly,” said Dick Rossell, DDA Board Chairman. “I am particularly excited about the positive response from the public.”

This is just one of many beautification efforts those in the Holly community have been making.  The village has seen new murals go up, as well as new lighting in Battle Alley to help create a more defined sense of space in an area often used for community events and photography.
For more Holly-related stories, check out the OAKLAND COUNTY TIMES HOLLY NEWS PAGE
To support our work, join the OAKLAND COUNTY TIMES READERS CLUB. 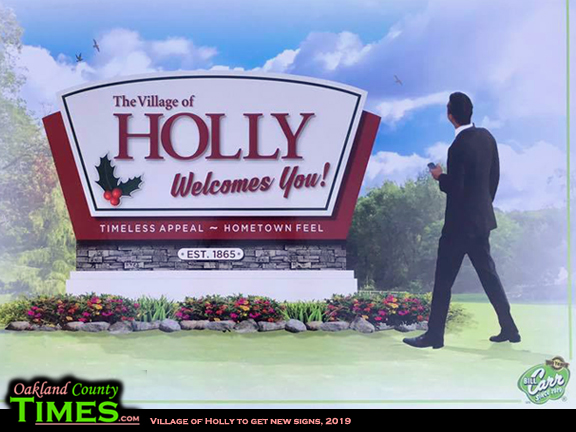