(City of Berkley, July 4, 2019)
Berkley, MI- Whether it’s organizing a fish fry or helping out a local family in need, Commander Tom Bustance of the American Legion Post 374 is always there for the Berkley community.
Under his leadership, the post has prospered. Members of Post 374 are an active part of many of the City’s activities, such as Berkley Days, Taste of Berkley, Lids 4 Kids, the Fire Open House, Memorial Day and Veterans Day ceremonies, and the Holiday Lights Parade. Through their efforts, money and food are collected to feed homeless veterans throughout the year.
After serving as the post commander for the past five years, Tom is stepping down from his leadership role. The City Council honored him in June with a resolution that recognizes June 9, 2019, as Commander Tom Bustance Day.
“Thank you for everything you’ve done,” Berkley Mayor Dan Terbrack said. “Post 374 is in

great shape today and that’s a testament to you and the folks you were able to galvanize in getting it to where it is today.”
When Commander Bustance took over Post 374 five years ago, it was facing financial difficulties and the possibility of closing due to bankruptcy. Through his leadership, and with the help of his membership, he managed to return the post to solvency.
“We were subject to foreclosure and I didn’t want that to happen because the City of Berkley and the American Legion are a team, and without the Legion, you would have a void,” Commander Bustance told the City Council. “So we worked together to make sure it didn’t happen – I thank everyone in the community who showed up at our fish fries and helped

support us … and I thank the City Council who was always there for me.”
Tom might be stepping down as commander, but he still plans to remain an active member. William “Ike” Isenhour, a former major in the Marines, will take over the command.
“It’s tough to say goodbye,” Commander Bustance said. “But I’ll still be around and I look forward to working with all of you to make us a better team.”
Service, Patriotism, and Camaraderie are the main tenets of the American Legion, which has had a presence in Berkley going back to the 1940s. Located at 2079 Twelve Mile, the post was named for Stanley J. Fons, a World War II veteran, and longtime member of the Legion who actually bricked every brick on the current building. 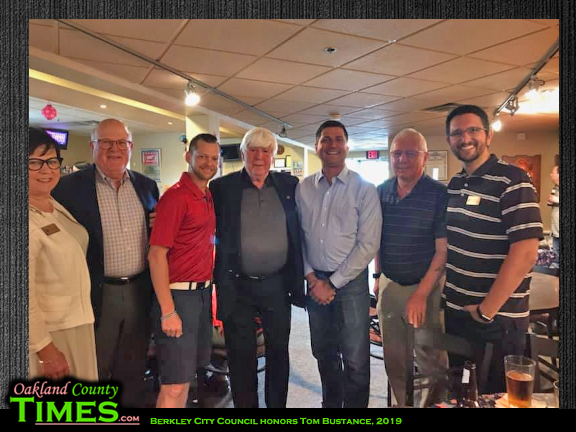