(Crystal A. Proxmire, July 1, 2019)
Ferndale, MI- With a nice, sunny, dry Monday, the Ferndale Department of Public Works was able to close off the street so a year-round symbol of love and diversity could be added – a rainbow crosswalk!  The crosswalk is on West Nine Mile Road between Allen Street and Woodward, a mid-block crossing near Natural Food Patch.
Rainbow crosswalks have been installed in cities around the world, often to celebrate diversity and LGBTQA+ Pride.
“The rainbow crosswalk is a direct response to residents asking for this creative way to highlight

where people walk,” said Ferndale Councilperson Melanie Piana when news of the crosswalk broke last week.  She and Mayor Pro Tem Greg Pawlica have been working on the idea for more time than one might expect.
“For about three years,” she said when asked.  “I got tagged on Facebook asking for a rainbow crosswalk. I then experienced one first hand in Seattle in 2016 when I was there for a transportation conference. I immediately put in the request to the city to get this done.
“The challenge has been finding the right type of crosswalk treatment they can stand up to salt and snow. We want the crosswalk to be durable more than one year as paint fades. I thank the DDA for helping get this crosswalk over the finish line!”

Ferndale is home of Affirmations LGBT Community Center, and the annual Ferndale Pride festival.  Ferndale also celebrates Pride Month with a rainbow flag flown outside City Hall, plus one that is inside Council Chambers year-round.
Pride has also been demonstrated in nearby cities like Hazel Park and Oak Park where rainbow flags are flown, and Royal Oak who recently had Family Pride Day at their Farmer’s Market.
“The crosswalk has been a goal of several people for a long time.  I’m glad we can finally install this fun symbol of history and diversity,” said Mayor Dave Coulter.  He credited Piana and Pawlica for their persistence, and city staff for coming up with solutions.
The project is a collaborative effort between the Downtown Development Authority (DDA) and the Department of Public Works (DPW).  DDA Chairperson Jacki Smith, who also owns Candle Wick Shoppe, said “The DDA is excited to see the rainbow crosswalk installed as this was an idea that began 2 years ago. We chose the rainbow in support of Ferndale’s growing culture of inclusion. We are a proud collective of unique individuals and welcome more diversity as we grow.”
Learn more about Downtown Ferndale at www.DowntownFerndale.com.
Note: A previous version of this story stated that the DPW installed the crosswalk. The crosswalk was installed by an outside company.  We apologize for the error. 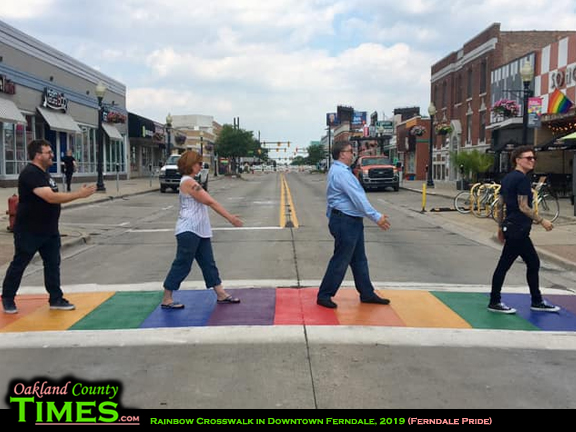 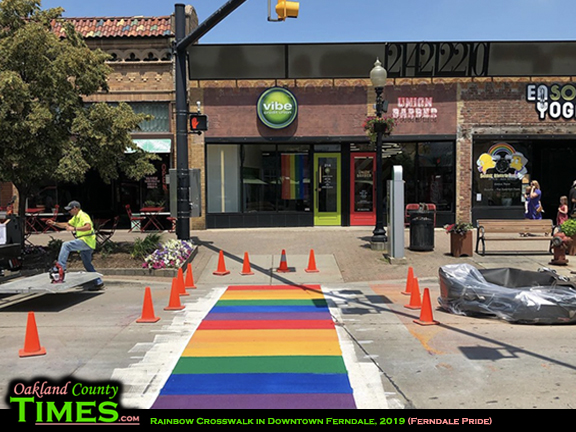