Ferndale, MI – W. Nine Mile Road is expected to be closed Monday, weather permitting, for the installation of a crosswalk unlike any the city has had before. This crosswalk will be painted in the colors of the rainbow.
Rainbow crosswalks have been installed in cities around the world, often to celebrate diversity and LGBTQA+ Pride.  Ferndale’s will be on W. 9 Mile Road between Allen and Woodward, near Natural Food Patch, not far from Affirmations LGBTQA+ community center.  (Note: this story previously stated the crosswalk would be at Allen, and that was incorrect.)
“The rainbow crosswalk is a direct response to residents asking for this creative way to highlight where people walk,” said Ferndale Councilperson Melanie Piana.  She and Mayor Pro Tem Greg Pawlica have been working on the idea for more time than one might expect.
“For about three years,” she said when asked.  “I got tagged on Facebook asking for a rainbow crosswalk. I then experienced one first hand in Seattle in 2016 when I was there for a transportation conference. I immediately put in the request to the city to get this done.

“The challenge has been finding the right type of crosswalk treatment they can stand up to salt and snow. We want the crosswalk to be durable more than one year as paint fades. I thank the DDA for helping get this crosswalk over the finish line!”
Ferndale is not only home of the Lesbian, Gay, Bisexual,Transgender,Queer/Questioning, Ally community center – it’s also the home of the annual Ferndale Pride festival.  While the crosswalk is going in too late for the event (which was June 1 this year), it will make it for the last few days of Pride Month.  Ferndale also celebrates Pride Month with a rainbow flag flown outside City Hall, plus one that is inside Council Chambers year-round.
Pride has also been demonstrated in nearby cities like Hazel Park and Oak Park where rainbow flags are flown, and Royal Oak who recently had Family Pride Day at their Farmer’s Market.
“The crosswalk has been a goal of several people for a long time.  I’m glad we can finally install this fun symbol of history and diversity,” said Mayor Dave Coulter.  He credited Piana and Pawlica for their

persistence, and city staff for coming up with solutions.
The project is a collaborative effort between the Downtown Development Authority (DDA) and the Department of Public Works (DPW). This article will be updated with the cost when that information has been made available.
In addition to supporting the community, a rainbow crosswalk can help draw visitors to an area.  It can also provide a good spot for selfies, as long as people take them from the sidewalk where its safe.
The installation is expected to take 10-15 hours, and the crosswalk itself should last for years to come.
UPDATE: Crews will not be able to work this week due to wet pavement, but the work will be completed on a dry Sunday or Monday when traffic is slowest on that street. This article has been updated to include the location and the fact that people should take their selfies from the sidewalk (not the street). 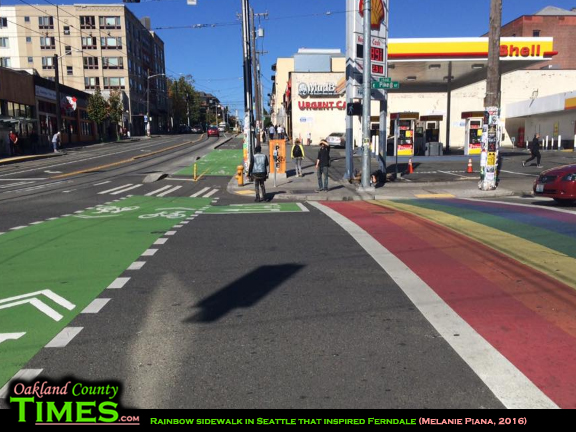