(Cheryl Weiss, June 21, 2019)
Oak Park, MI -The chilly weather and all day rain may have deterred many Oak Park residents from coming out to Thornetta Davis’ concert at Shepherd Park on Thursday, but for the approximately 100 in attendance, it was a perfect evening to listen to music, dance, and relax with friends and neighbors.  It was the kickoff to eight weeks of summer concerts in the park on Thursdays, and this one was sponsored by the Oak Park Library.   “Since the concert was the night before Summer Reading began, when we decided to sponsor a concert, we knew this was the one!” said Sarah Jones, Director of the Oak Park Library.

Davis, often referred to as “Detroit Queen of the Blues” brought her beloved trademark blend of blues and jazz to the stage, engaging the audience as they swayed and tapped their feet to the beat of each song.  As the concert continued, the energy of the crowd grew, and for the last thirty minutes of the concert, the skies cleared while many attendees danced.
Davis’ music reaches fans of all ages, backgrounds, beliefs, and life experiences. She speaks about the importance of talking to young women about making good choices, and she sings about tough times, challenges we all experience as well as the joyful times. She also talks about her faith in God, and the blessings in her life.
Davis travels around the world performing her music and she has won numerous industry awards, including eight 2017 Detroit Music Awards.   In the past, Davis was a part of The Gospel Truth, a gospel choir at Renaissance Unity, and she inspired hundreds if not thousands every Sunday with her powerful voice.  Her song, “I Believe,” featured in an

advertisement for the Mike Morris law firm, is well known and was featured in the Superbowl, but it was even more powerful and inspirational tonight at the park.  “I’ve never heard anyone sound that perfect live.  She was amazing!  We were a small crowd, but an enthusiastic one!” Jones said.
A special moment in the concert occurred when she invited “Mighty Mike” Mendelson to join her onstage.  Mendelson, just eleven years old, with the stage presence and talent of a professional musician, stole the show as he played his harmonica.  Davis shared that they have known each other for most of Mendelson’s life.
Towards the end of the show, Davis sang “Get Up and Dance Your Blues Away”, and that’s exactly what the crowd did.  From preschoolers jumping and bouncing to the beat to a group of friends square dancing, to couples dancing, to a senior citizen using her cane as a prop to dance, everyone found a spot either right in front of the stage or anywhere

there was a big open space, and  they danced with pure joy and energy.
Summer does not officially begin for one more day, but if tonight is any indication, this summer in Oak Park will be filled with music and fun for all ages.
Concerts will be held in Shepherd Park in Oak Park every Thursday.  The schedule is below:
Thursday, June 27, 2019 at 7:00 PM – The Couriers
Thursday, July 4, 2019 at 1:00 PM – Kimmie Horne
Thursday, July 11, 2019 at 7:00 PM – Big Ray and the Motor City Kings 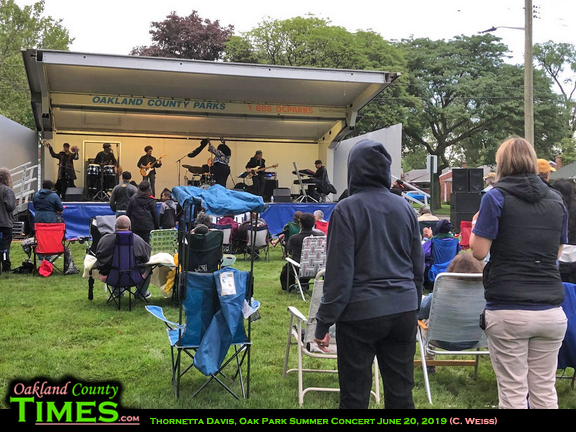 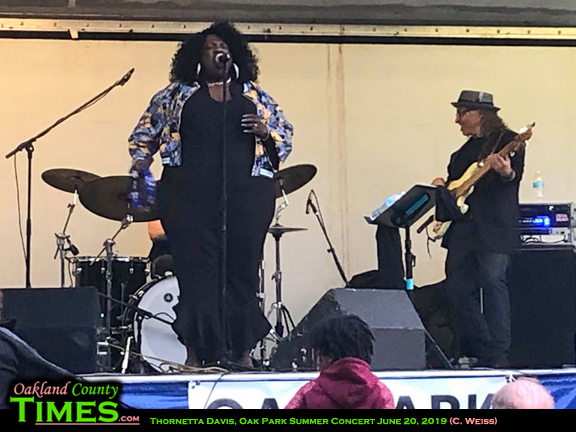 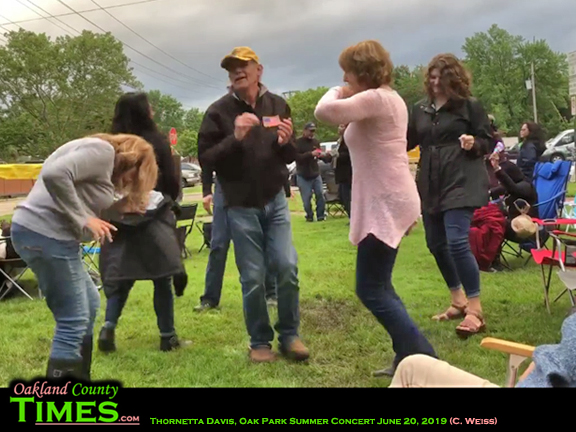 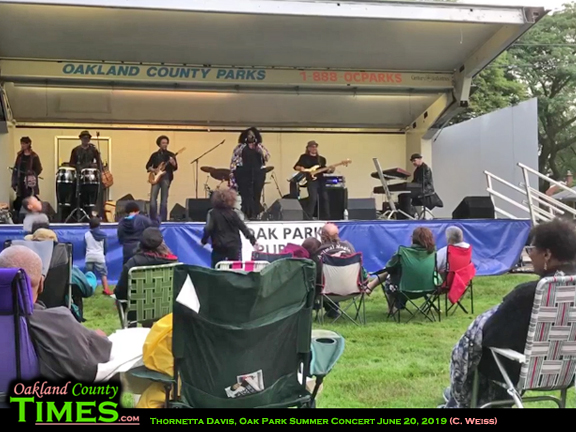 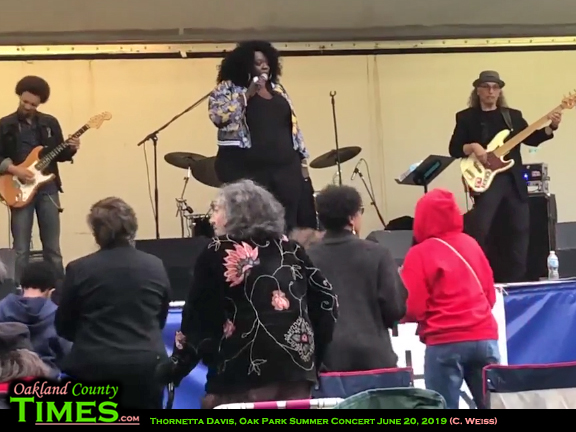 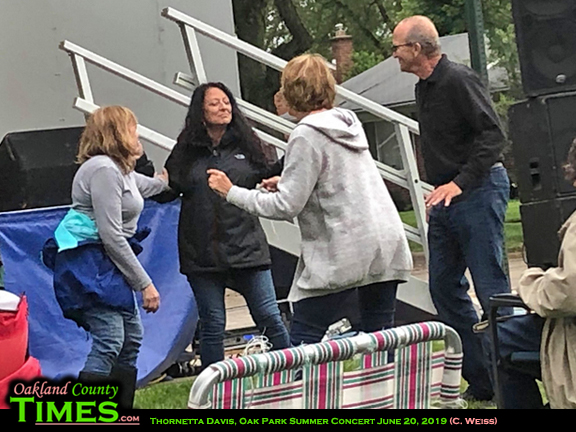 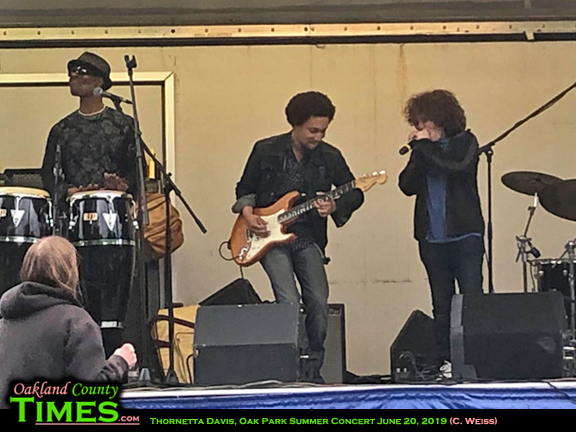 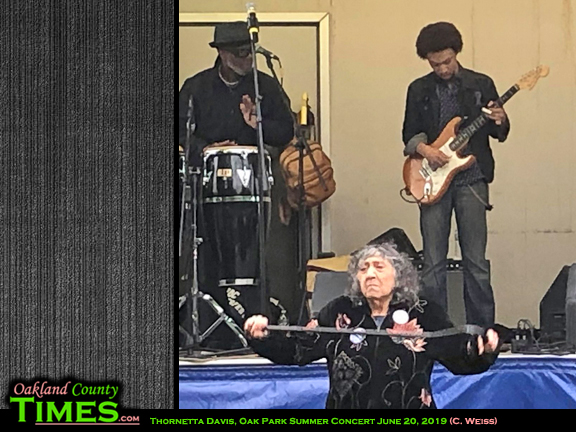 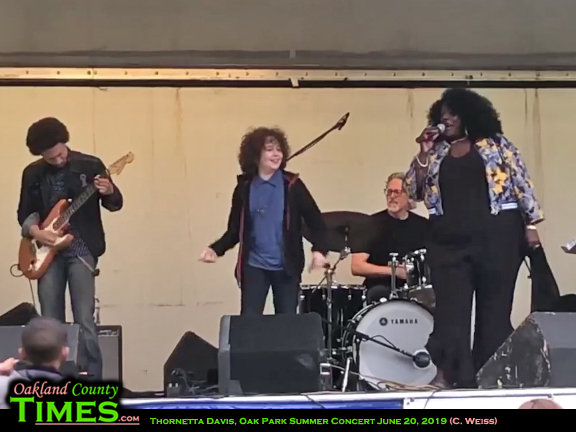