Several Ways to Get Involved from the Madison Heights Community Showcase

Several Ways to Get Involved from the Madison Heights Community Showcase

testing of backlogged rape kits, fighting human trafficking, taking seniors to war memorials, and scholarships for graduating seniors.
They also help each other.
“We have over 90 members who put in 13,000 volunteer hours,” said Chairperson Jill Gold.  “There is a lot of camaraderie.  We visit friends’ houses. We have holiday parties. It’s a very good way to make friends and make a difference.”
A newer organization in the Madison Heights Arts and Cultural Advisory Board that started by the City in 2017.  It launched with a community photography contest and has grown to take on other projects like a mural at the Civic Park Shelter and a pop up artists’ market. Chariperson Kymm Clark, owner of Clark’s Fabrication, joined in September of last year.  “This is where I belong,” she said.  “I found a good group that works well together and

emboldens the city.”  Volunteers are welcome to serve on the board or just to volunteer.
Clark recommends that people consider what their skills and interests are, and to get involved.  “When people get involved, we help build a community we can rely on.”
Businesses do their part in Madison Heights as well. The Madison Heights Downtown Development Authority (DDA) uses tax captured funds to make improvements to the 11 Mile and John R. area, while the Madison Heights/Hazel Park Chamber of Commerce is a membership-driven organization that helps business owners network, learn, and come together to give back to the community.
“Businesses should do business with other businesses in the city,” said Mike VanBuren of

Artech Printing.
“When you join a Chamber you have to be engaged.  You have to put in the time to volunteer and network so you get to know other members.  You have to plant a seed and make it happen.”  Both organizations have opportunities for resident involvement as well, you don’t need to be a business owner to be part of the city’s economic success.
There are at least two groups for older adults in Madison Heights – Active Adults at the Active Adult Center, and Friends of Madison Heights Area Seniors.
Jennifer Cowan heads the Active Adults program, which is for anyone age 50 and up. She listed just some of the opportunities at the center, including a variety of enrichment classes, BINGO, massage, trips, healthy cooking classes, arts and crafts, computer room, exercise room, yoga, Zumba, a quilting group, a crochet club, and a program that helps low income

seniors with yard work.  A shuttle bus is available to take seniors on errands, and seniors can volunteer to work the phone lines among other tasks.
“I still feel like I’m needed somewhere,” said Beverly Parker who has been volunteering and attending programs for over ten years.  Her favorite thing is being able to help other people who call in with questions.  There are resources to be shared, and it feels good to do so.  “I know myself, at almost 80, how it feels to worry how you will get to the doctor, or who will cut the lawn if the kids are out of town.  I hear it in their voices they’re so worried.  They are so relieved when they get help.”
Friends of Madison Heights Seniors meets every third Tuesday at Solberg Tower on Dequindre.  Many members are residents, but there are people who come from all of the city and beyond.  The group has fundraisers and uses money to help older adults with emergency

home repairs, care baskets, and holiday gifts to nursing home residents.  “It helps so nobody has to be sitting at home staring at the television,” said Secretary Karen Pesta who joined Vice President Jessica Wilson at the table to let other seniors know about their services.
Another opportunity for volunteering is Forgotten Harvest, which helps distribute food to 250 agencies in SE Michigan.  The warehouse is located in Oak Park, where sorting and packing are done largely by massive numbers of volunteers.  Bill Welch came to the roundtable to help recruit more volunteers.  “I just think it’s wonderful, such a simple organization. It attacks the food waste problem and the hunger problem,” Welch said.
There is also a Citizens’ Academy where residents can learn more about the City and how it operates, including an inside look at the Police and Fire Departments, Code Enforcement, the City Clerk’s office and more.  Realtor Rickey Busler took the course previously and highly recommends it.  “You don’t realize the money it takes or the number of people involved,” he

said. “You have a better understanding of where your tax dollars go.”
State Representative Jim Ellison was also on hand to meet residents.  Ellison had been Mayor of Royal Oak before becoming a representative for both Royal Oak and Madison Heights at the State level.  “It’s been nice getting to know the people and the groups here in Madison Heights,” Ellison said.  He wanted residents to know that his office can help people with all kinds of inquiries around government services, laws, resources, etc.  Those who want to keep up with what’s happening in Lansing can sign up for updates from  .
Other orgs on hand included St. Patrick’s Episcopal Church which has a food pantry, book store and coffee house.  The Madison Heights Library has a variety of services, programs, events, and opportunities to volunteer.  The Madison Heights Community Coalition works to prevent substance abuse among youth.  And Ascension Macomb-Oakland was on hand with a list of resources, support groups, and events.
For more local news visit the Oakland County Times Madison Heights News Page.
Thank you to Bosco Lounge at 22930 Woodward Ave, Ferndale, MI 48220 for sponsoring our “Get Involved” series featuring local nonprofits, clubs, and groups.  Check out a city by city list here. Want to contribute a write up of a group you care about?  Message editor@oc115.com with your idea. 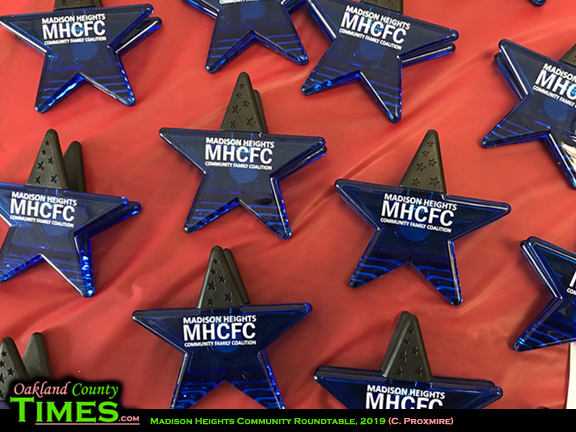 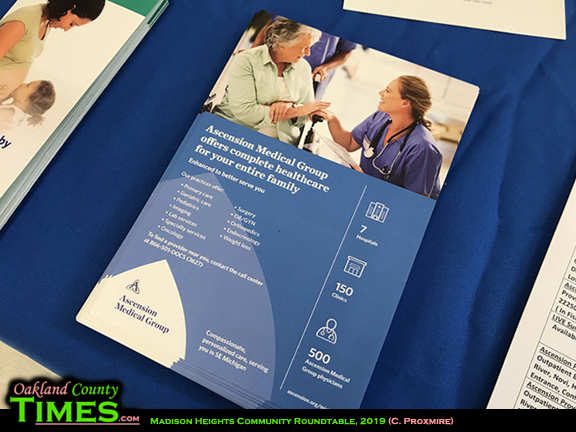 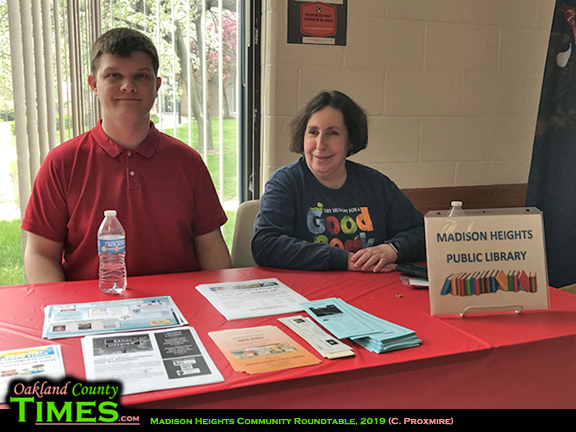 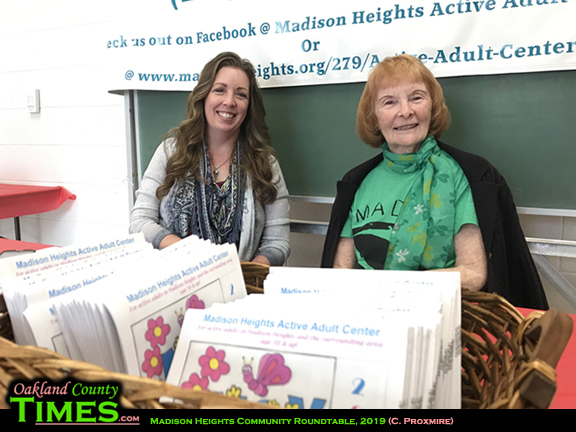 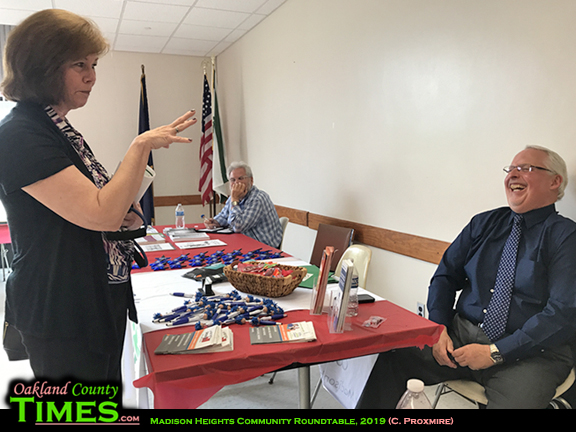 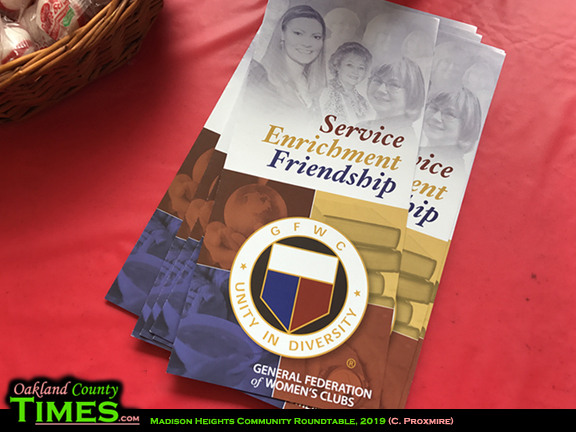 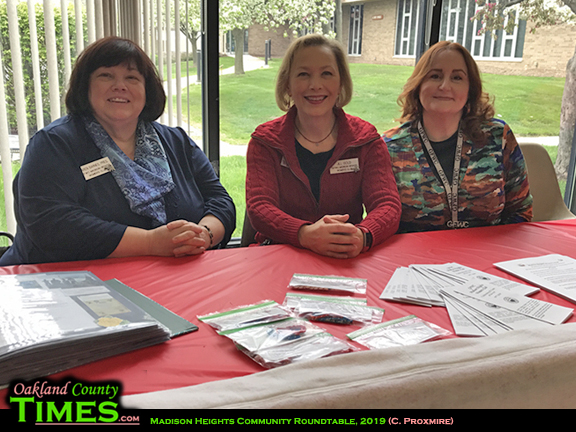 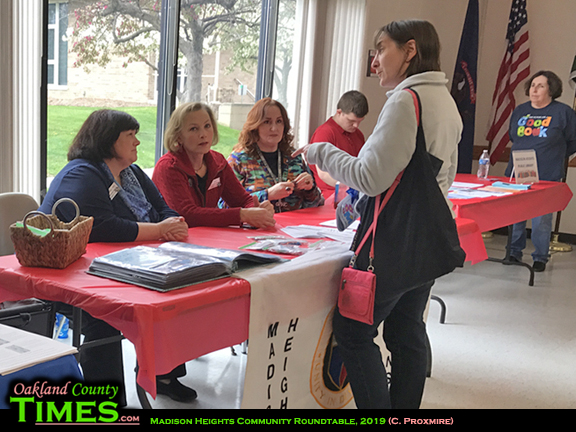 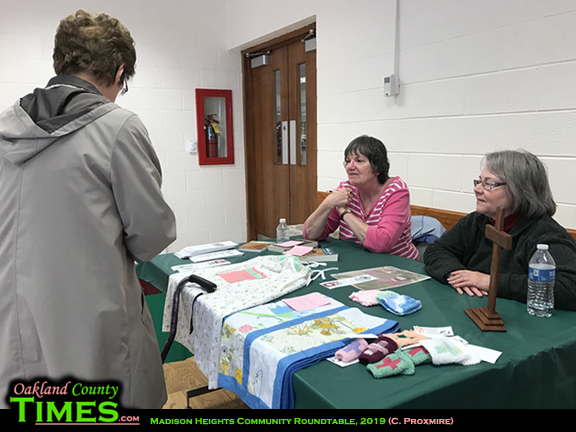 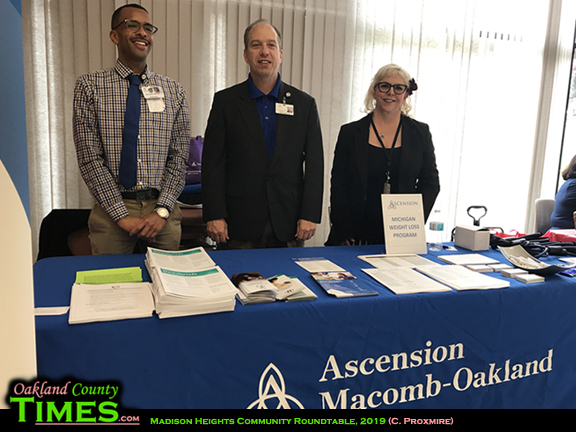 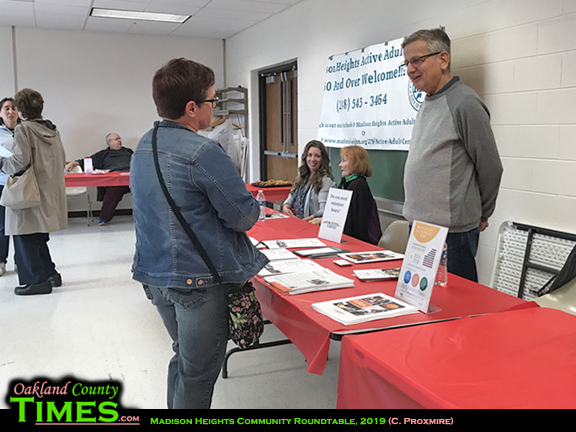