Requests
(Crystal A. Proxmire, June 17, 2019)
Oak Park, MI – With Council members Carolyn Burns and Ken Rich voting no, Oak Park City Council adopted a policy to govern all flag-flying requests, as well as a request made by a young married couple in the city to fly the rainbow LGBTQ+ Pride Flag.
Tyler and Ryan Mims-Beltz got married at the Ferndale Pride Festival June 1.  They are also active volunteers for the event.  The men say they’ve been scoffed at, insulted, and threatened when they leave the neighboring city to come home to Oak Park. So they came before City Council on Monday to ask that the city fly the rainbow flag in support of LGBTQA+ Pride.
“It may not mean something to some of us in this room, but it makes a difference when you’re

walking out on the streets of this city and you want to feel welcomed,” Tyler said. “Even in states all across the US to this day you can be fired, you can be discriminated against, you can get denied housing simply for being gay, lesbian, bisexual, transgender. That’s still a problem. ..By flying this flag in our city this will connect our residents, our business owners, and let them know we have a safe city, that we have elected officials that support us.”
With Ferndale, Hazel Park, and Detroit all flying the rainbow flag, the couple hoped Oak Park might consider it as well.
And they did – spending a good part of Monday’s council meeting debating the wording of the policy.  The concern for the majority on council was not if the rainbow flag was appropriate or not, but how the policy could be written to comply with the Equal Protection clause of the US Constitution.  The government has to be fair when creating policies that deal with free speech.
“Whatever policy we put on the table will apply to everyone.  We have to make sure we are being content neutral,” said Mayor Pro Tem Solomon Radner who works as a Civil Rights

attorney.  The law protects free speech and requires government bodies to be fair in how they apply their policies related to speech.  Just three years ago the Supreme Court made a ruling that changed how cities were regulating signage,  allowing them to regulate only physical aspects of the signs, not the message.  If a city allows  signs for one type of message, they must allow them for all. For example, if a city allows real estate signs on lawns, they also have to allow political signs, signs announcing meetings, signs for products, signs that are critical of the government etc.
Radner’s fear was that if the city allowed one group to place a flag, and there were no clear standards in place, they might find themselves in the position to have other groups placing flags that aren’t appropriate.  “An example that has unintended consequences is in Boston right now with the Straight Pride parade,” Radner said.
City Manager Tungate, along with input from Radner and the City Attorney, crafted a policy that puts the challenge of filtering out insincere requests elsewhere.  The policy adopted by council Monday allows for the placement of flags that are in honor of causes recognized under Presidential Proclamation.

Examples of this include Women’s History Month, National Disability Employment Awareness Month, and National Hispanic Heritage Month.  (Others can be found here)  The policy also limits the flying of the flag to the month of the observance, and it requires at least 30 days notice for a request, and the requester must provide a flag that is 3 feet by 5 feet with appropriate holes.
Tungate found his inspiration while looking at the US Flag Code which, is a Federal statute.  The law outlines the treatment and placement of flags, including the requirement that the American flag be flown highest on flagpoles.  By looking at the federal law, it got him thinking about using Federal celebrations as a guideline.
The policy adopted by Oak Park Council limits flag placement requests to those associated with federally recognized proclamations, such as Pride Month which was so named by President Barack Obama in 2009.  The policy still requires a vote of City Council before a flag is raised, and they can still turn down a request.

Oak Park Council also waived the 30 day requirement and voted to fly the Pride flag for the remainder of the month.
Jeffrey Oliver of Hazel Park is the founder of Michigan LGBT Peer Support Network.  When Hazel Park approved flying the rainbow flag last year, Oliver had one with him to give.  He took part in a ceremony this year to raise it. He came to the Oak Park meeting to support his friends in their rainbow quest.
“If I was driving through Oak Park and I saw that flag, I would say this is a place I feel safe stopping to shop in, and maybe I might consider buying my next home here,” Oliver said.
Ferndale Pride Director Julia Music said that there are people living in Oak Park who are afraid to come out of the closet.  “When a city does things like displaying a rainbow flag, it lets your residents know they are valued as part of the community,” Music said.  “I guarantee there is someone at home right now who will see that flag, and what they will feel will change

their life.”
Council member Ken Rich argued against the rainbow flag.  “We have a city flag. The city flag covers everybody in the city  The Michigan state flag covers everybody in the state,” he said
Rich said he supports only the governmental flags.  “I would be opposed to any other flag,” he said.
When asked if other flags had been flown in Oak Park previously, Tungate said that Oak Park had been flying the purple, white, and gold flag honoring 100 years of women’s right to vote.  That was part of a county-wide effort to spread the word about the history of voting rights for women.
Burns did not give any reason for her opposition to both motions. Council member Regina Weiss wore a rainbow pin to the meeting. She, Radner and Mayor Marian MeClellaan were all happy to have passed the policy.
The flag will go up within the coming days and be taken down at the end of the month.  If the flag is to return next year, someone in the community will have to make the request by the end of April.
Visit the Oakland County Time Oak Park page for more local stories! 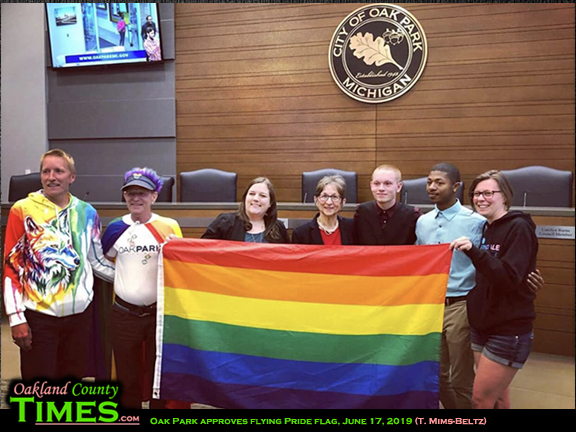 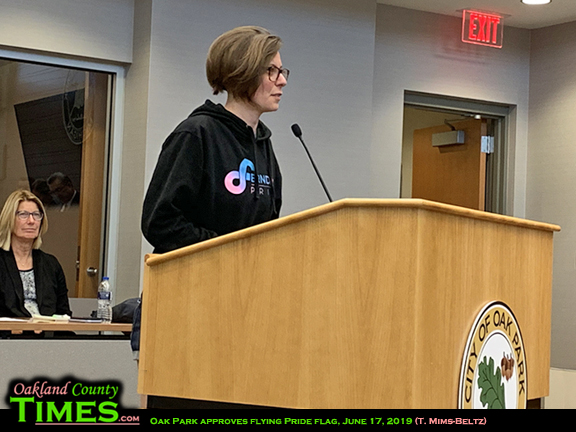 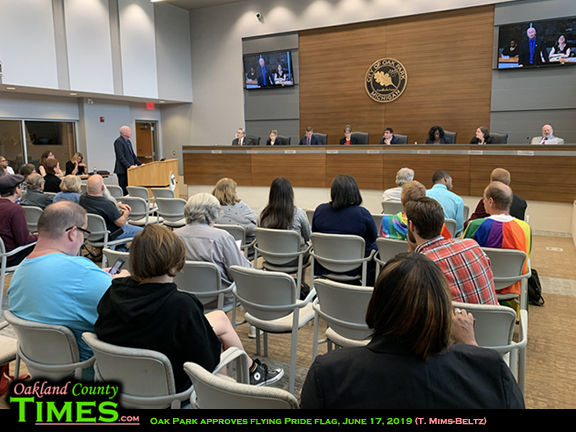 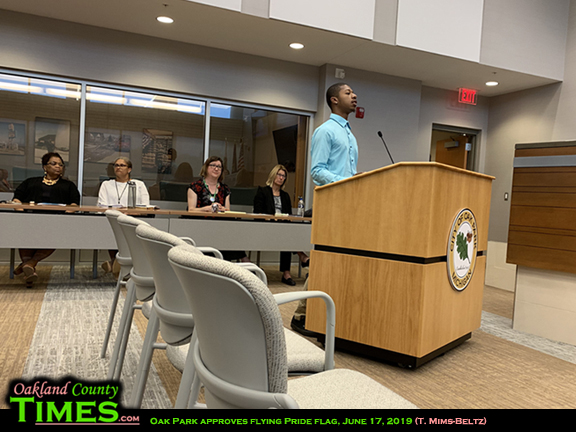 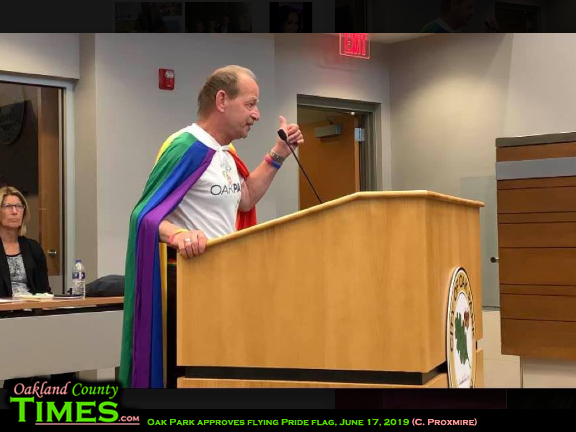 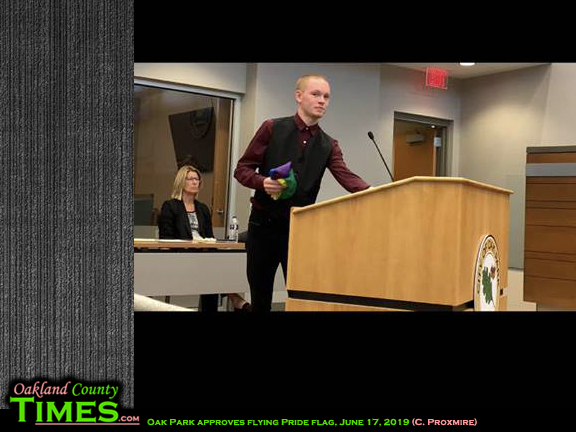