Oak Park Police Capture Murder Suspect
(Crystal A. Proxmire, June 16 2019)
Oak Park, MI- Less than 24 hours after a 29-year-old man was fatally shot in his Oak Park home, Oak Park Police have arrested the suspect.
Police searched all night and into the day for 23-year-old Devante Bailey.  He was found hiding on Dartmouth Street, just a few blocks from where the shooting occurred on Burton.
Bailey had been living with the victim and his family, and was like a brother-in-law to the deceased. Police are still investigating what led up to the shooting.
Public Safety Director Steve Cooper shared details of the arrest, stating in an email “He did force his way into the vacant home that was vacant due to a fire. The home was under construction. The suspect never encountered anyone to our knowledge. Our Officers surrounded the house and observed the suspect inside at which time he was ordered out. He initially ran back into the home but eventually surrendered without incident. We also recovered a gun we believed was involved in the homicide.
“We plan to present the case to the Prosecutor’s Office early next week for the appropriate charges.”
A neighbor who wishes to remain anonymous took photos of the arrest.
This story will be updated as more information becomes available.
NOTE:  Police Reports come directly from the Police Department or agency involved and are written by the person or agency listed below the title.  We generally run these “as is” or with minimal editing for punctuation, spelling, etc. Suspects should not be presumed guilty.  Those needing more information about a case are encouraged to follow up with the reporting agency or court system for the most current information.
This story is presented without advertising due to the subject matter. Please support our sponsors at http://oaklandcounty115.com/sponsorshipadvertising/.
Previous story: http://oaklandcounty115.com/2019/06/15/oak-park-police-searching-for-homicide-suspect/ 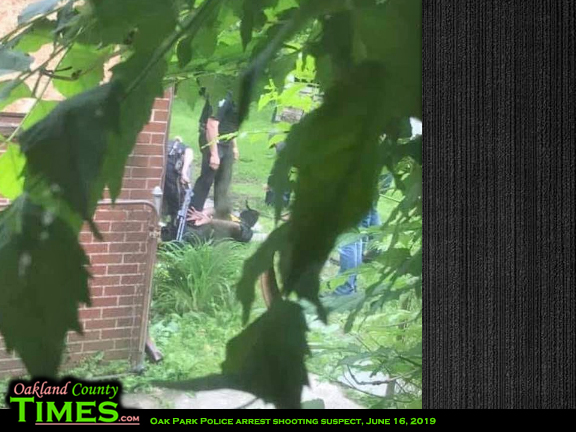 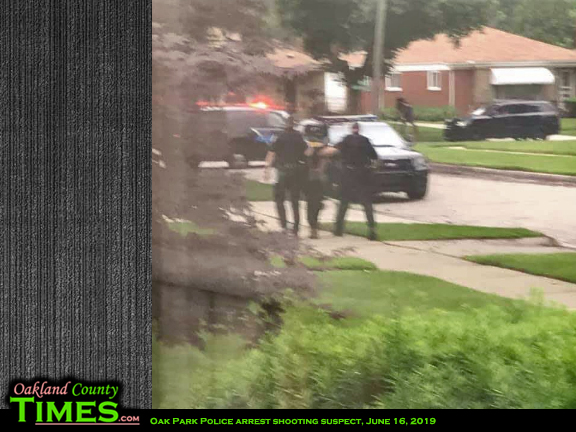