Paradise: Phoenix510
(Sam Gurwin, May 14, 2019)
Hazel Park, MI -In a business-oriented section of Hazel Park, well known for machine shops and blue collar warehouses, one may be surprised that a yellow, otherwise non-descript, building houses a gathering space for artists and musicians.
This building houses The Phoenix 510, an arts and humanities enclave featuring art openings, concerts, dancing and more.
Art is defined in many ways here- with music and painting being the major areas here. This clean open studio space has a large painting area to the left and an open area for a stage and a crowd to the right.
The conversion from industry to artist collective is felt in the dark spaces where the ghosts of machinery

are replaced by paint brushes & guitars.
Co-Owner Ben Frank of Detroit describes the collective as “multifaceted, we do everything here- community advancement, community events, gaming tournaments and e-sports.”
Frank was passionate about the variety of arts offered at Phoenix510.  “Every form of dance,” he said. “We work with every form of artist.”
This is a newer location as they moved from a different part of Hazel Park in December 2018.
They carry on the name of a third Partner who died, Michael Wiggins and honor him here. Frank really looked up to Wiggins. He was the creator of Up In The Aether, Steampunk convention, and steampunk dance parties at the former location, The Phoenix Café. Frank and co-owner Steven Gamburd hope to do more to memorialize their friend.
“We hope to honor Michael Wiggins with a mural that I plan on painting. We also hope to honor the other few friends that we lost over the last few years and possibly do a combined painting of a few people,” Gamburd said.  ‘I have a few for sure that I was close with and worked with like Michael. I started a gallery with Hans Barbe in June

of 2009, and then Michael (a previous business owner) came into business with Hans and titled the venue The Phoenix Cafe. From the beginning, Michael created an atmosphere that only had room for peaceful gatherings. He helped the people with issues maintain their dignity. He provided everyone with a welcome. I learned a lot from him and ran the business as he moved into bigger things. He would even come and help. We miss him so much, it is difficult to rehash this.”
During a recent concert, the building was bustling with activity.
Justin Cinquemani was painting a huge mural on one of the walls. “I have been an Artist forever, it’s natural,” he said.
Justin brought a few of his pieces when the collective opened and got the okay to paint the mural.
“I heard about this place through the grapevine,” he said. And he’s been there ever since.  “It’s like a team; we all put our brains together and make it happen.”

Alternative music sensation Crashing Cairo opened up for the headliner Band AL1CE for a concert there recently on what was dubbed Rock Music/ World Music Night.
Lead Vocalist Robert Wax of Royal Oak was happy for the chance to play at the eclectic, grassrootsy space. They recently signed with RL Records, a subsidiary of Universal Music. They’re on the rise as they prepare for concerts in Phoenix, AZ as well as a venue much different than that gritty, community-driven artist collective of Phoenix510 – The Whitney in Detroit.
“The heart of this place is art, music, and community” said Frank.  The guys at Phoneix510 also help with the Hazel Park Art Fair that takes place Aug. 24-25 at Green Acres Park.
He even said that former Mayor Jeffrey Keeton was at the Collective a few days ago as “He’s an artist as well!”
“Everyone is welcome here,” he said.
The Phoenix510 is located at Phoenix510 is located at 510 E 10 Mile Rd, Hazel Park, MI 48030 one block east of John R.  Check them out online at http://www.510building.com/ 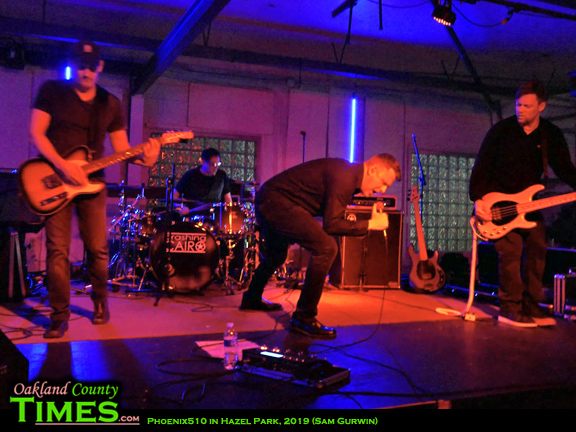 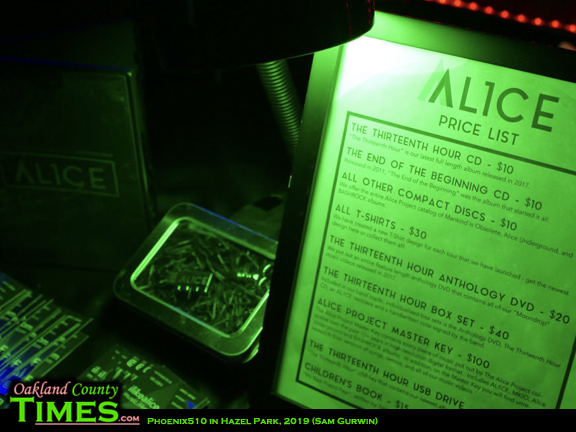 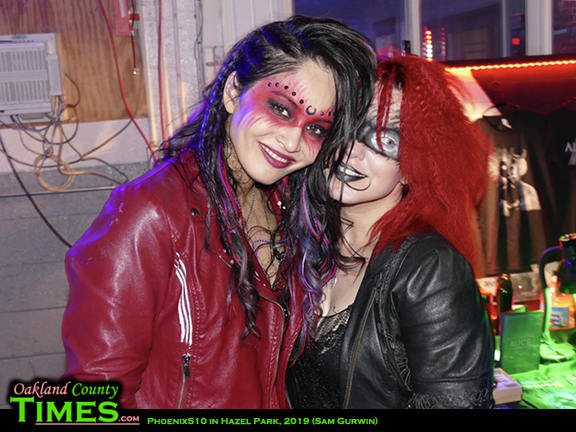 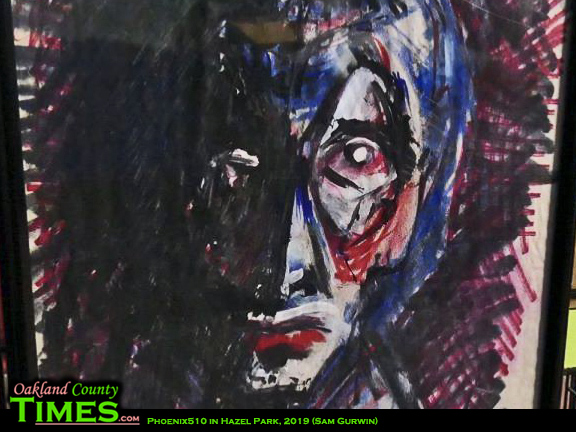 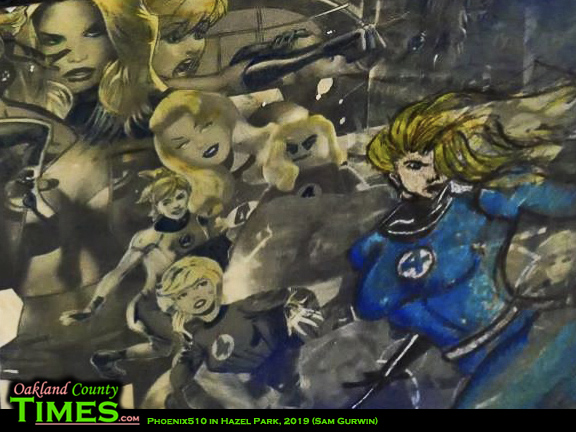 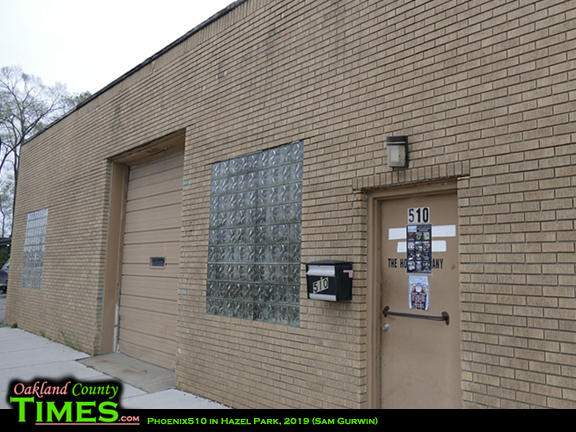 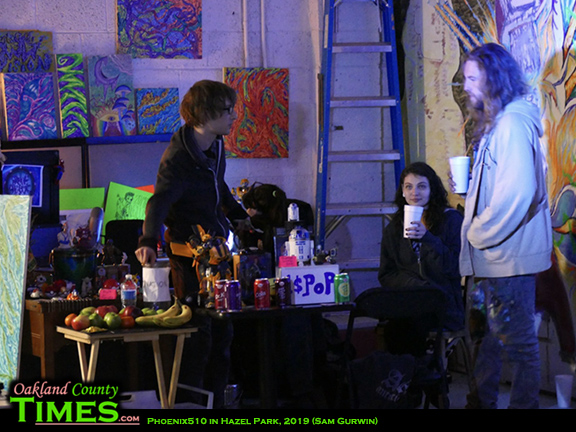 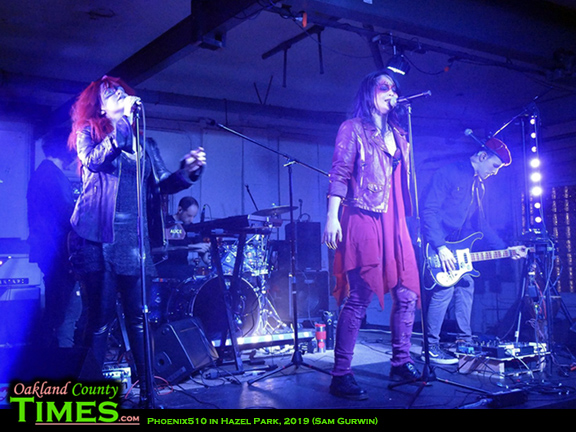 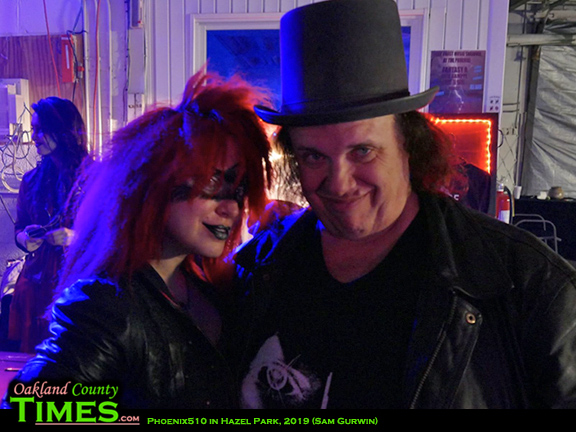