(Crystal A. Proxmire, May 12, 2019)
Oak Park, Clawson, MI- Justina Bissett dreams of one day using chemistry to rid the world of unwanted pollution, including the millions of plastic bags that litter the plant.  She is a senior at Clawson High School who spends her afternoon attending Center for Advanced Studies and the Arts in Oak Park. CASA is a place where students from nine area school districts can learn in a more focused environment while meeting kids from other communities.
It’s also where Bissett got a taste of what happens in research studies, with a senior project that focused on her passion.
First she had to research.  “What is the most effective way to eliminate plastic bags in Southeastern Michigan?”

At first she had hoped to gain more understanding of the chemical processes involved in breaking bags down.  She tested different chemicals to see if any dissolved the bag.  “None of the chemicals I used on the bags had any effect on the bags what so ever,” Bissett said as she explained her senior project at the recent CASA open house and 35th anniversary celebration.  “Low Density Polyethylene is what the bags are made of, and that is very hard to break down.”  She said there is some research being done on what types of bacteria might be able to help the process.
After graduation Bissett will be attending Oakland University to study chemistry, so one day she might be the person to solve the problem. But for this year’s project she went in a different direction – tackling the ways people contribute to the problem and reducing bags by reducing their use.
“This is a plastic bag,” she said.  “People think they’re harmless but they’re not.”  She showed pictures of a turtle tangled in a bag, bags on the side of the road, bags woven in to birds’ nests, and bags floating in the ocean.

She sought to find if people realized the risk, and what their habits were in regards to plastic bag usage. She also wanted to find out if there were variations between adults and teens.  Bissett surveyed other students at Clawson and at CASA, and for adults she surveyed people at her chiropractor’s clinic.
Her survey found that adults recycle more than teens with only 14% of adults not recycling or not doing so often compared to 51% for teens.  35% of adults said they sometimes recycled the bags and 41% were often or very often. Among teens 26% said sometimes, while 23% were often or very often.
Of those she surveyed, 42% of adults used reusable bags, compared to 21% for teens.
Her hope is for people to reduce their use of plastic and increase their use of reusable bags.

Some obstacles to this, she said, include the price, the fact that bag taxes and bans are hard to pass, and that people’s perceptions are not easily changed “If people have used plastic bags their whole life, it’s hard to change their minds,” she said.
“Hopefully as I go to college and get older I can use chemistry to find ways to help.”
Bissett was one of three students who did presentations as part of CASA’s anniversary.  CASA is a consortium school that provides higher level classes for students in the Berkley, Clawson, Ferndale, Lamphere, Madison, Oak Park and Pontiac School districts. It began in 1983, serving 35 students with four classes. Now there is an entire catalogue including AP level courses and the arts.Students go to their home high schools in the morning and come to CASA in the afternoon. CASA offers 16 Advanced Placement classes in all major subject areas, an advanced visual arts program, a robust dance program, three world languages and many unique electives students cannot find in their home schools.
Check out more pictures and stories from the open house HERE. 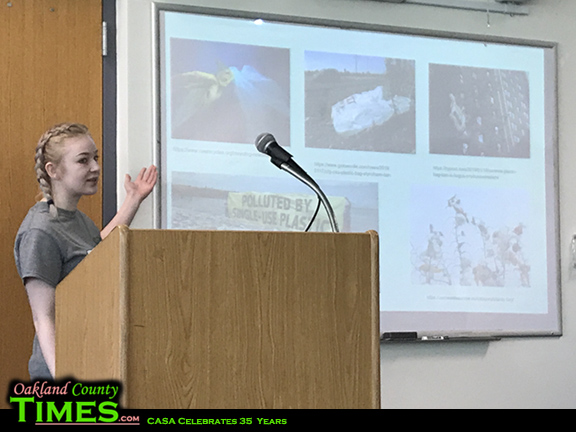 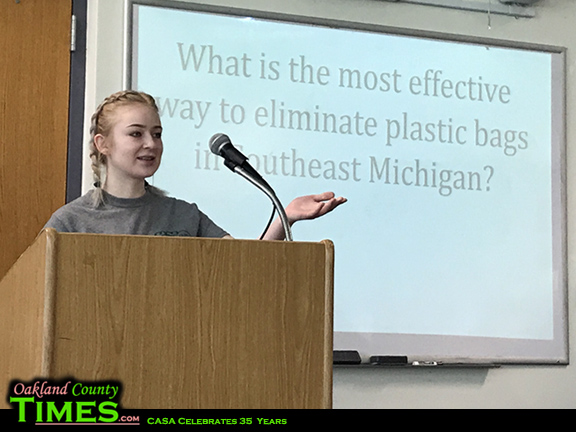 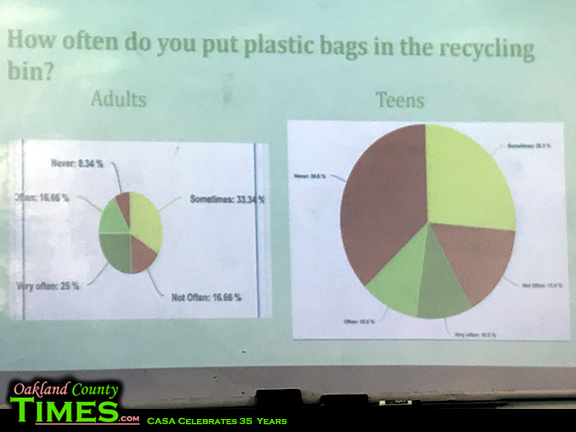