Redford, MI- Low budget comedy skits and zany characters are common place these days. But before there was a 24/7 audience of You Tubers, comedians built their following with live shows and TV appearances. One of the original cult phenomenons was remembered recently at the Redford Theatre.  Ron Sweed died April 1 at the age of 70, and fans gathered to remember him and the character he played so well – THE GHOUL.
Showing on Weekend TV in Detroit in the 70’s- THE GHOUL was a great Horror Host. THE GHOUL introducing bad Horror Movies with antics like slap-stick fun with his side kick Froggy, blowing small objects up with firecrackers, segments of viewers home movies sent in, and friendly-mocking of the bad movies; all with the ever-present cigarette present in his hand.
Since he was a Child, Ron Sweed loved Horror Host Ghoulardi (Ernie Anderson) on Cleveland

TV. So much so he dressed up as a Gorilla at a Ghoulardi appearance and got in the show.
Sweed became an assistant to Anderson and eventually took up the Mantle of Ghoulardi (changing the name to The Ghoul) and the rest is Cleveland and Detroit TV History!
The Redford Theater in Redford had Sweed appear before for special events; always a huge draw! The Theater had a Tribute for him after his passing.
Talking to some staff members, they sent out an email to come early and line-up. And boy were they aright. The Theater was packed with Fans and Cosplayers- all for the love of quirky

humor, poorly-made horror movies, funny and friendly mocking of the shown movies and the ingenious skits & acts put on by Sweed. The Redford organized a great night of 70’s-styling entertainment in the spirit of those zany times!
The Tribute included: (1) Comedic Acts by a MC dressed up like THE GHOUL and Trog, his Ape Assistant (2) Music performances by The 3D Invisibles & The Paybacks (3) Appearance by Artist/Cartoonist David Ivey who worked with THE GHOUL (4) Prize give-aways of original Art and more (5) Presentation of the Film “PSYCHOMANIA” (6) The Beautifully-restored REDFORD THEATER (7) Other Guests who knew THE GHOUL (8) Collectibles Table with THE GHOUL’s Family.

Some fans had “Froggy” Stuffed Animals on a stick wand and would raise them from their seats during a fun commentary/laugh tracks on the shown Film.
Several People dressed up in GHOUL outfits and had fun taking pictures with other fans. Sean of Washington, Michigan dressed as THE GHOUL. “Wasn’t it a fantastic evening?” said Sean, dressed as the Ghoul in a lab coat, one-lens glasses and Army helmet. “It was cool to see things from The Ghoul’s perspective, people in awe as they spot you, and wanting to chat, take pictures, and goof off”
Being silly and having fun was what Ron Sweed a.k.a. THE GHOUL was all about. A great night at the Redford Theater kept that laughter alive even though the beloved actor no longer is. 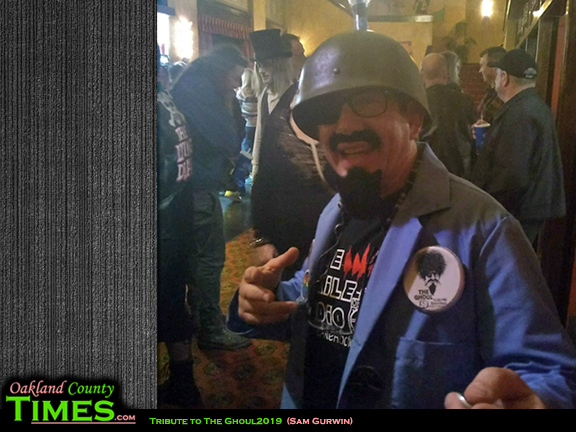 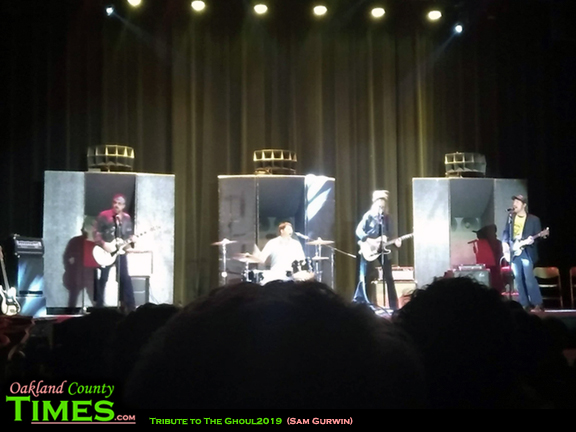 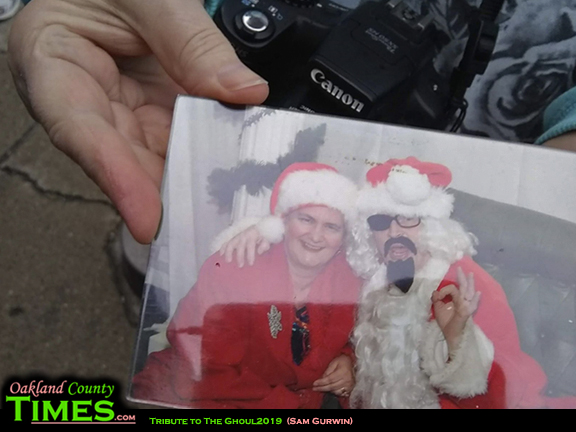 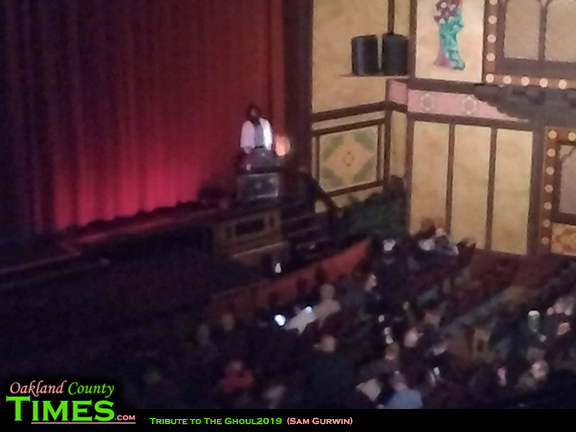 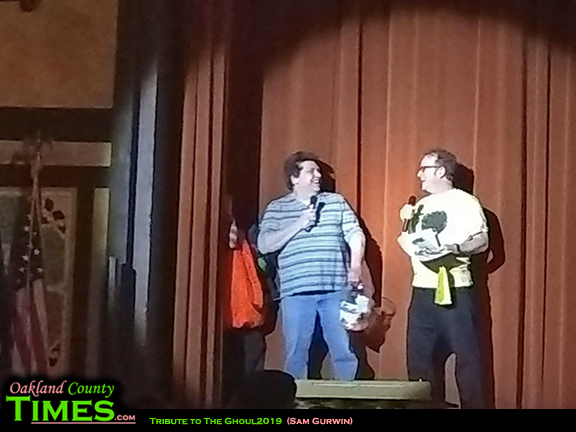 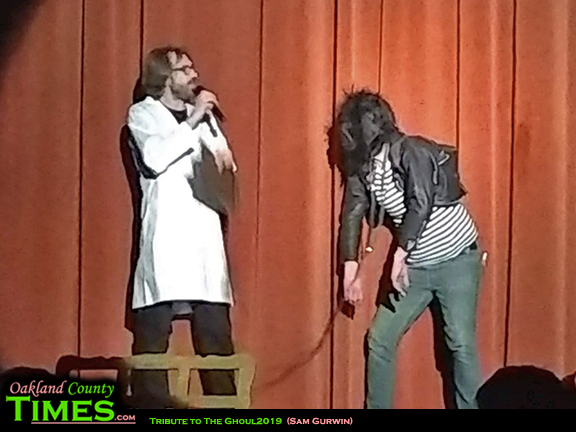 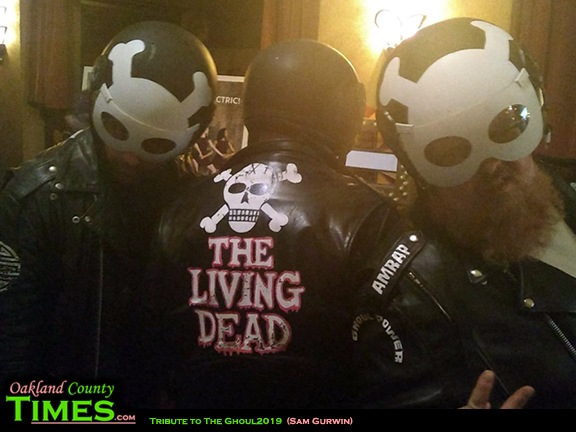 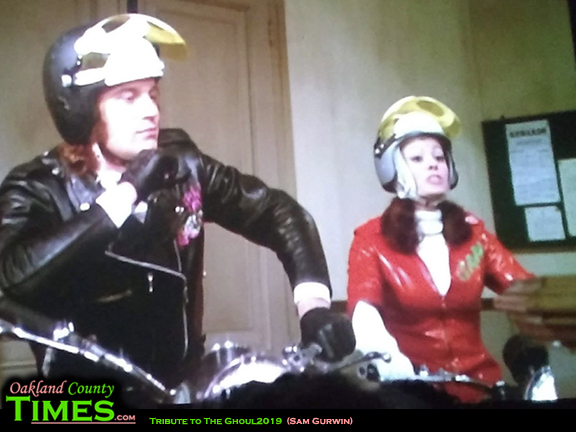 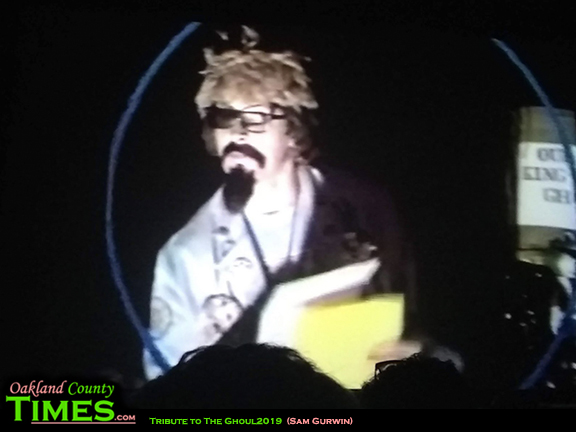