(Crystal A. Proxmire, April 21, 2019)
Rose Township, MI – “Here’s the thing,” said State Representative Mike Mueller as he sat before about 80 Rose Township residents at a town hall April 15 regarding House Bill 4095, which he co-sponsored.  The bill would allow people with private residences on 20 acres or more to have up to ten foster children. Currently residential group homes may have six, and lot size is not a factor. “I was approached by the sponsor of the bill who wrote this and I kind of do have a soft spot for foster kids,” Mueller said.  “And I understand you don’t want this in your back yard, I get that.  Me as an elected official in politics, I’m not going to make every single person happy every vote I make. It’s just impossible.  I represent 90,000 people but I also have to look out for the best interest of people as a whole…. There’s 300 kids currently sitting with nowhere to go.  I have to look out for the people in the area, but I also have to look out for the well-being of some of these kids.”
After the meeting, he changed his mind.
Muller, who represents Rose, Groveland, and Holly Townships, co-signed the bill after being approached by State Representative John Riley of the 46th District, which includes Oxford.
It’s in Oxford that the founders of the faith-based nonprofit House of Providence are hoping to operate a home with ten foster girls who would live together under the 24/7 care of licensed professionals.
The founders, Maggie and Jason

Dunn, live next door to the proposed home.  They previously owned a group home in Detroit before deciding to move their ministry north.  They purchased a 70 acre farm on Terrace Road in Rose Township for their boys’ home, and property next door to their own family’s house in Oxford for the girls home.
The proposed law would not impact the number of children at the Rose Township home, because the property is already the subject of a consent agreement that allows that home to have up to twelve foster kids. The home is actually designed for ten, though currently they have only five.
Though they will be happy to take in six children to the Oxford home, they would rather take in ten because they have the space and means to do so.  Doing so would require either a local variance, or change in the state law that requires communities to allow home of up to six.
The Dunns hired former State Representative Bill Bullard to help them through the process of getting the law changed.  The proposed bill passed the State House and Senate last year with bipartisan support, but was vetoed by Governor Rick Snyder who .
The new bill, HB 4095, is sitting in the local governance committee, and is not likely to move forward after the community of Rose organized around an anonymous letter that made the rounds on social media
“This bill is for a private non-profit organization to bypass Rose Township rules, build two institutions on Terrace Road, and house almost 70% more teens than is allowed in Michigan,” the letter stated.
“Although written for Rose Township, the bill affect the entire state and sets a dangerous precedence,” the letter states.

Dunn spoke at the meeting, calling the letter “false.”
He stated he has no intention of dividing up his property and building more homes.  And if his intent were to build more and add more kids, he could still do quite a bit without a change to the law.  His actual intent, he said, is to sell some of the land because they don’t need that much.  He’s already approached neighbors giving them the first option to buy before putting it on the market.
The letter stated that the bill was “written for Rose Township.”  In reality, the proposal was put forth in response to the situation in Oxford.  Dunn and Bullard explained while the law does impact the entire state, it doesn’t impact that particular property in Rose Township because there is already a court order in place on that property.
Township Supervisor Dianne Scheib-Snider led the push against the bill, stating that such a bill takes away local zoning rights.  She currently serves as the President of the Michigan Townships Association.  Under her leadership, the Michigan Townships Association came out against the bill.  Supervisors from Commerce, Groveland, and Holly Townships joined Scheib-Snider at the meeting with Muller, fearful that a change in the law would mean more foster kids in their communities too.
The letter and efforts by Scheib-Snider got the job done as scores of residents called the representatives who co-sponsored the bill and showed up to the April 15 meeting. About 80 people were in attendance.
As Muller

tried to explain his reasons for supporting the bill, he was frequently interrupted by residents.  “There are 300 kids currently looking for homes.  If you take a kid and you give them a good home and teach them responsibility..” he said before being interrupted.“That’s not our problem,” one resident shouted. Several others clapped and cheered.
The comments against the bill were numerous. Residents were not required to state their names.
“These kids need to be taken care of,” one resident said. “But this is our money being used to do something we don’t want.”
“Rural communities become a magnet for pulling kids from the city of Detroit and Flint into these areas,” another said.  “We don’t have the police service to deal with this.”
“They have this up north… Your cabin isn’t safe. Your snowmobile isn’t safe.”
“I have a strong feeling about working with children,” said one former teacher in the audience, “keep them in the home.  It is a commonly held belief that those individuals that remain in a home setting have a far better chance of succeeding.”
Other residents felt slighted by the idea they don’t care about kids just because they oppose allowing more of them.  “Saying it’s about the kids is just an emotional issue,” stated one resident “This isn’t about the kids, it’s about our rights.”

“I help local kids from Holly,” another resident said.  “I raised three teenagers from a broken home, but those were Holly families.”
Some residents complained about the current Rose Township home, which now has five boys living in it along with 24.7 licensed caregiver supervision. One said the police are there all the time. Another said visitors to the home use his driveway to turn around in.
Muller’s office requested police reports from the property and found two incidents over the past few years. However, residents say the police information is false.
“If you talk to us you’d find out the truth,” a neighbor said.
Dunn is accustomed to the stigma, though it still breaks his heart to hear. He and his wife have adopted seven children and raised two of their own in addition to the foster kids they have helped raise.  His wife left the township hall with tears in her eyes.
“Foster kids get a bad rep,” Dunn said.  “I’ve heard people tell me these kids will rape, kill, pillage, steal our food…  These are just kids who need a good home.”  He added that many kids in the foster system had been abused, neglected, starved, and sometimes even sold by their parents for drugs.

“They’re just kids who need a safe place.”
Studies and reports vary over how many children are ideal in one home.  Residents sited several as well as gave anecdotal evidence that kids should not be crowded.  Currently there are over 90 residential homes throughout the state that have ten or more kids.  When Governor Snyder vetoed the bill in 2018 he questioned the benefit of having so many kids in one home. A representative from the Department of Health and Human Services testified on behalf of the bill, stating the need for more beds statewide.
Some in the audience questioned Dunn’s motives for housing foster children, claiming he was in it for the money. Dunn explained that while state money does support about 60% of the children’s living expenses, his ministry must fundraise to make up the difference.  “Anyone who has raised children knows that it is a lot of work.  There are other ways to make money,” he said. “This is something we believe in, that we live every day.”
People also feared that increasing the number of kids would “open the door” for other group homes such as halfway houses and adult foster care homes.  Muller assured residents that the bill was specifically written only to address youth homes.
Muller listened to the residents’ concerns and in the end agreed to withdraw support.

In an email to Oakland County Times, Miller said “My office continued to receive a small number of inquiries regarding HB 4095 from constituents in Rose Township and I thought it would be beneficial to call a meeting at the Rose Township Hall to discuss their concerns in greater detail.  I believe the meeting was very productive and it allowed me the opportunity to better understand how people felt about HB 4095 and what is going on in the community,” he said.
“While I do support of the concept of HB 4095, I have stated that I will vote against the bill should it reach my desk for a vote on the House Floor.  My duty as a Representative is to listen to the people who elected me and I hope residents know their voices were heard, despite my

personal feelings regarding the issue.  I also want to note that while I have stated my opposition to the bill, procedural rules do not allow me to withdraw my name as a co-sponsor until the bill is voted through passage on the House Floor.”
Democrat Jim Ellison of Royal Oak is also a co-sponsor who has pulled his support.  “I originally signed on because I thought this would be good for the kids,” he said.  “But this bill was created just to help one person. The community doesn’t want this and he’s trying to pass a law to go around this.  This is a local issue.”  Ellison said that if the bill comes to the floor for a vote he will withdraw his name from sponsorship and vote against it.
HB 4095 passed in the House Local Government and Municipal Finance Committee and is currently in the Ways and Means Committee.  It was slated for discussion last week but was pulled from the agenda. According to Muller and Ellison it is unlikely to be moving forward.
Learn more about HB 4095 at http://www.legislature.mi.gov. 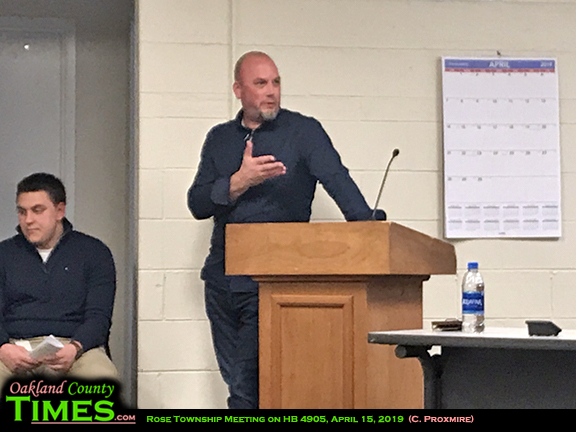 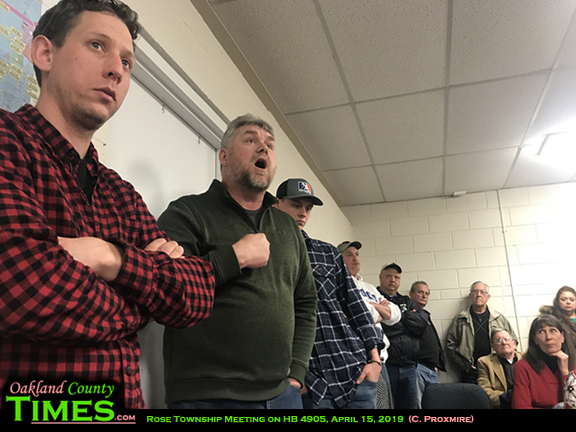 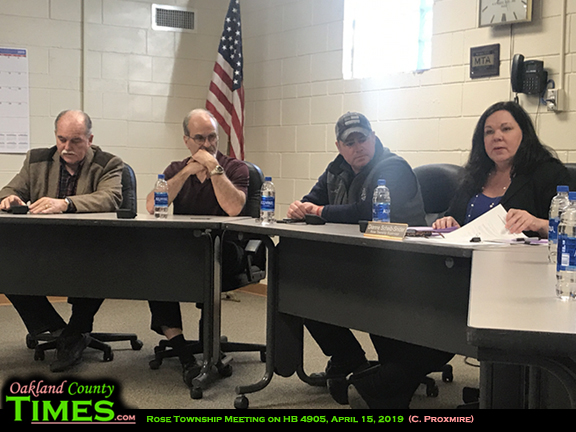 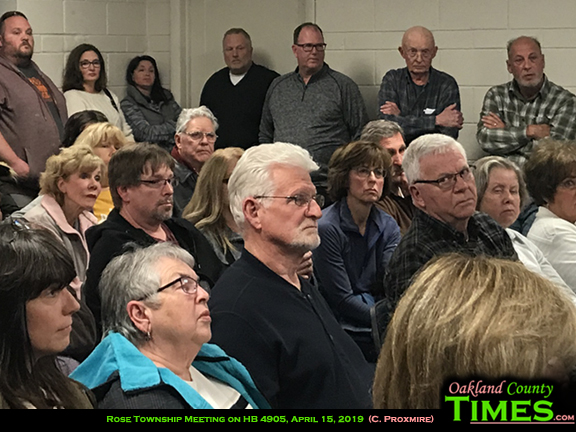 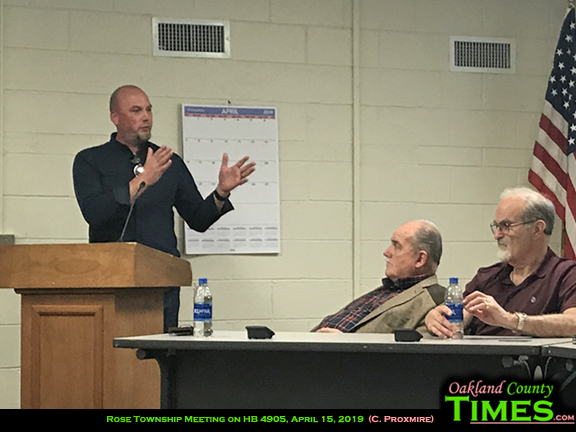 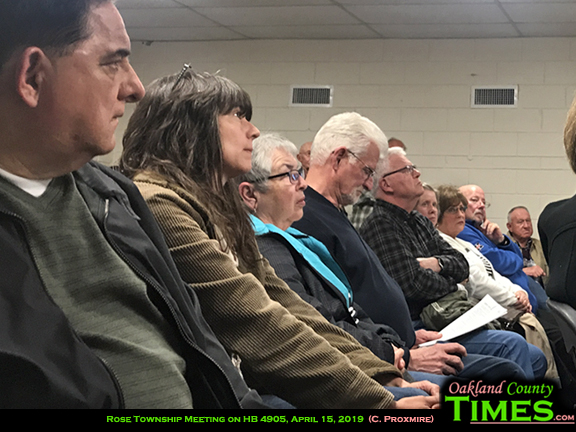 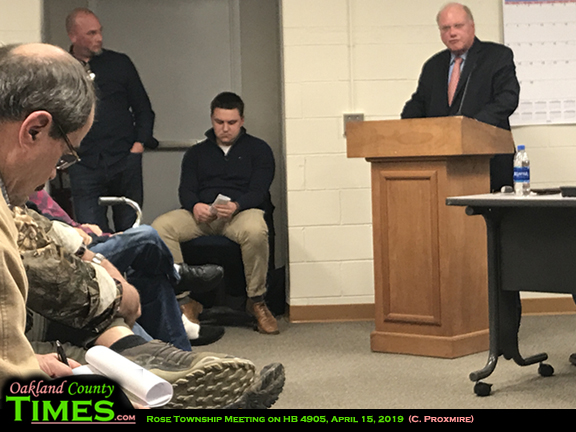 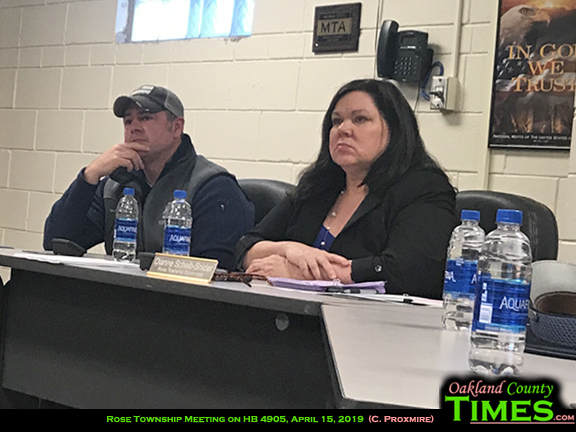