(Crystal A. Proxmire, April 7, 2019)
Holly, MI – Twice a year antique vendors from throughout the Midwest gather in Holly for the Early Homestead Show hosted by Dawn and Dick Rossell of Holly Hills Primitives. The event features over 50 vendors with tables full of treasures.  And sometimes, the tables themselves are the treasures!
The items are mainly from the early 1800s.  “I tell people to think of Little House on the Prairie,” said Dick Rossell. “Not Victorian, but before that.”  Some vendors focus on decorative items or antique tools and day to day items.  But for Dick it’s the furniture that is most intriguing.   At his booth were antique tables, hutches, benches, and even an old wooden rocking bench with an area to keep a baby secure.  “It’s called a mammy bench,” Rossell said.  “The mother or the nanny would sit there and do her knitting or mending while the baby would sleep.”

His favorite item of the day, however, was a pair of Civil War benches.  “I looked for those for four years,” he said.  “It’s not even really about the items or the value; it’s about the hunt.  A lot of us like the hunt.”
While this show is right up the street from the Rossell’s Shop, Holly Hills Primitives, the couple does travel around the country looking for good finds, and taking part in other shows.  Twice a year they host, bringing people they have gotten to know and consider friends to the historic village they call home.
Kathy and Ed Brandle came from Findlay, Ohio.  They found success early in the weekend,  selling a antique kitchen hutch shortly after the event began.  “I’ve been here for a couple of years,” Kathy said.  “A lot of the same people do all the shows, so we’ve made some good friends.”
There are seasoned collectors, those who just want to find what is right for their home, and

complete newbies.  All are fun for the Brandles to meet.  “Some people may not really know about antiques, or about history, but they see something and you see them just light up,” Kathy said.  “When people see something that looks like something their grandma used to have, it means something to them.”
There’s also some mystery in the objects.  “I like looking at some of these things and trying to figure out what they were used for.  I try to imagine what someone must have been doing, and how they came up with the idea to make the tool, and how it worked.”
Mixed in with antique vendors, were crafters and artists whose modern work reflected the spirit of the pioneering days.  Margaret Shaw from Manchester, Michigan is often inspired by

early American folk art.
Images of ducks, rabbits, chickens, cats and other animals graced wooden surfaces with an aged and washed appearance.  “The animals are from my life, county life, I’d say,” Shaw said. “I like the old country look with a more contemporary feel.”  This year was the first time Shaw came to the Holly Homestead Show, more often hosting art shows on her large enclosed porch back home in Manchester.
“I like to share what makes me happy,” she said.
The Early Homestead Show returns Sept. 7 at the Karl Richter Center, 300 East Street, Holly, MI 48442 from 10am to 3pm. Admission is $5. For more info, call (248) 634-7040 or email hollyhillsprims@gmail.com. 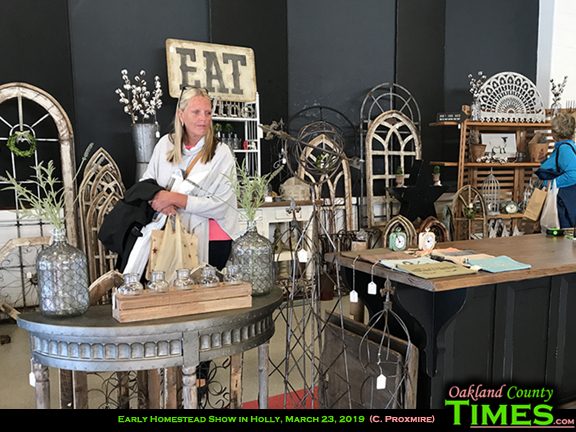 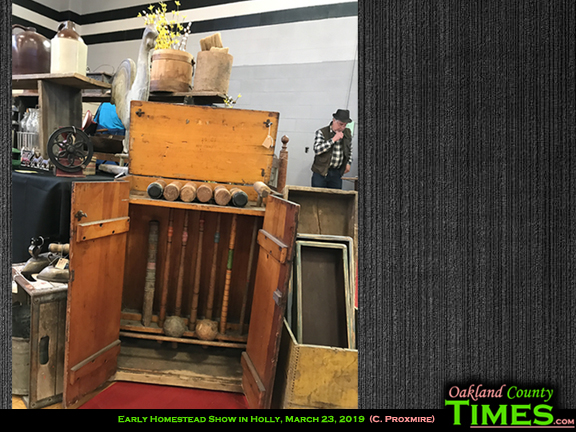 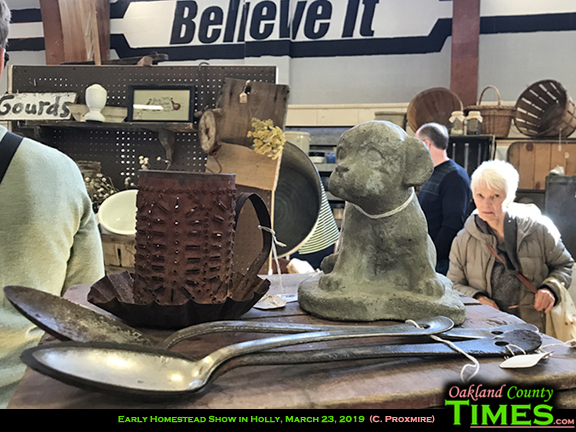 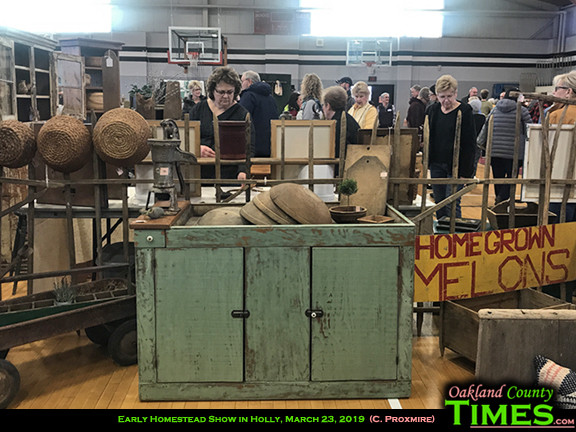 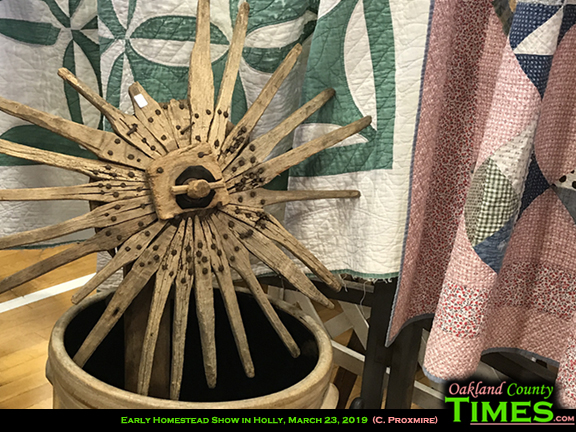 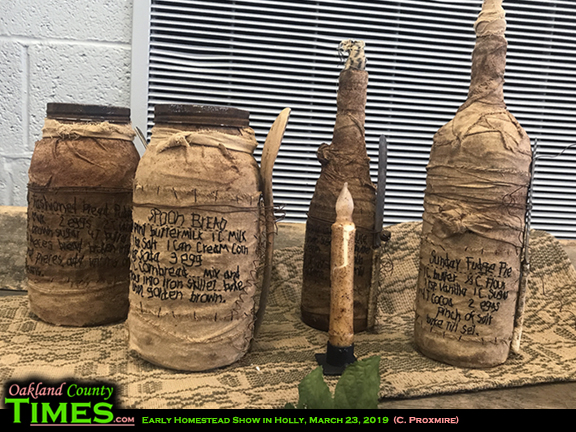 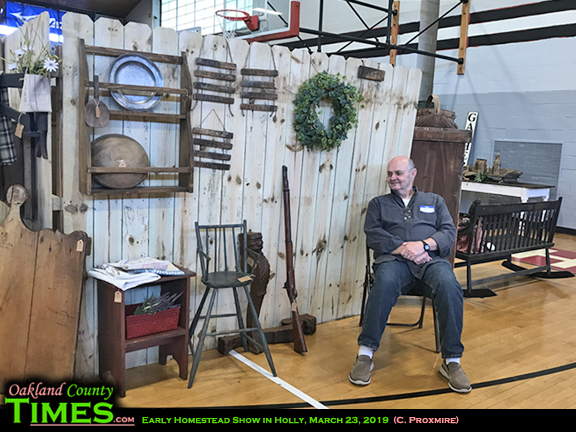 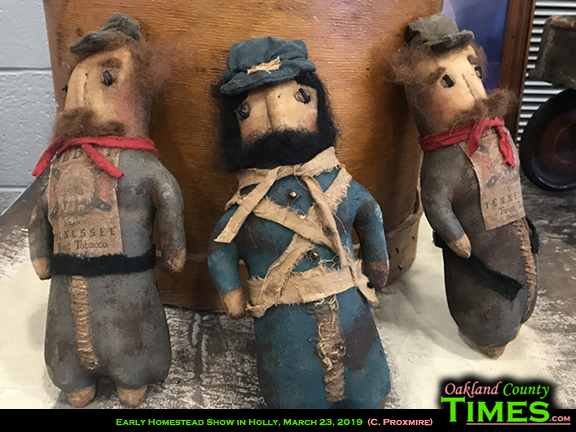 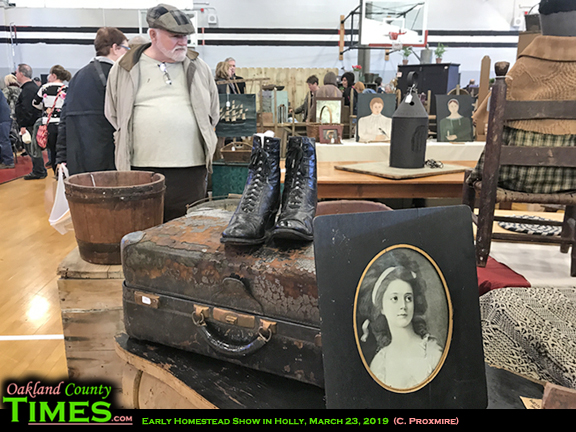