(Cheryl Weiss, March 9, 2019)
Oak Park, MI- You know a breakfast event is successful beyond expectations when the restaurant runs out of eggs before it is over.  That was the situation at Oak Park Public Safety Department’s “Coffee with a Cop” event Saturday morning at 9 Oaks Grill.
Every other month, Oak Park Public Safety Officers reach out to the community with an opportunity to enjoy free coffee and casual conversation at a restaurant in the city; the location changes each time.    According to Oak Park Public Safety Director Steve Cooper, they have been doing these events for at least 6 months.  “It’s not a new idea or concept, but a way for the Public Safety Department to interact with residents in an informal setting.  Whether they talk sports, local issues, or share concerns, it’s an open dialogue in a relaxed atmosphere.

What better way than over coffee?”
The turnout varies, sometimes a dozen people show up, sometimes more than 50 Oak Parkers attend.  Generally, larger venues, such as McDonald’s, bring larger crowds. Twice, the gathering was held at Davison Coney Island, a favorite spot for Cooper and other officers. The owner, Sam Bazzi, is “more than generous. I love Sam!” Cooper said.
Today everyone met at 9 Oaks Grill, a restaurant under new ownership since last year, where over 60 people crowded in for breakfast and spending time with police officers and fellow neighbors.  The staff was friendly, welcoming everyone as they entered, creating a festive atmosphere.  While 9 Oaks Grill already has a group of loyal customers, after today, they undoubtedly will have many more.
As hungry customers enjoyed their breakfasts of fluffy pancakes, crispy hash browns, eggs

made to order, crispy bacon, ham, toast, and more, the police officers circulated to chat at the tables.  Some Oak Parkers just sipped on the free coffee.  Others gathered in corners to discuss community happenings and issues.  They also got to celebrate the good things happening in Oak Park, including a continued reduction in crime.
Steve Gold comes to these events regularly and noted that today seemed special. “What a turnout!” he said.  Nearly every table was filled, with more people continually coming in.  “Look at this today!  It’s great to see citizens and public safety officers getting to know each other.”
Community

Resource Officer Devin Benson agreed.  “It was a great event, great turnout!  I got to meet a lot of new residents I never met before.  This is bridging the gap, bringing the community together.”
Benson also shared that this time, more officers stopped by to join in.  “What’s great about this is that the residents get to know the officers, and the connection is like having their own personal officers.”
That is exactly how resident Amy Greenhut feels.  She looks forward to these events because, “I like to hang out with police officers.  It’s fun, I like to see Devin (Officer Benson) and Robert (Officer Koch).
While resident Steven Kohn has come to events before, and said they are great, this time he brought his cousin, Marian Littman, a retired teacher who formerly taught in Oak Park.  When asked what she thought of Coffee with a Cop, she said, “Outstanding!  It’s nice

to see the officers protecting me.  It’s good for the community.” She added, “It’s nice to run into old friends, former students, and parents of former students.” Her former students clearly feel the same about her, as one of her former students joined her and Kohn at their table for breakfast, and another former student and her parents stopped by to chat with Littman.
Another benefit of Coffee with a Cop is it inspires neighbors to get out and spend time together during a long winter.  Christine Melkonian does not usually like getting up early, but she got up today to go to Coffee with a Cop with her neighbor.
She also planned to come because “Officer Koch told me to come,” she said laughing.  “It was great!” she said.  Joining Melkonian at her table was Ray Fairbanks, a lifelong Oak Park resident.  “It was on my calendar,” he said.  “I live close by, I had time, and I wanted to come.

Oak Park is a good place to live,” Fairbanks added.
Community Resource Officer Robert Koch was asked his impression of the event.  “Fantastic,” he said. “The biggest we ever had!  This time, not only residents and officers came, but retired police officers from other communities, such as Detroit, stopped by for breakfast.  We also had some of the Blue Knights, a motorcycle club for cops, and some paramedics that work with Oak Park.”  With a grin, he added, “And, of course, my fan club!”
Also reflecting on the event, Tori Hergaja, Manager of 9 Oaks Grill, said, “Amazing!  We bought the business over a year ago, and the cops helped to get us settled in.  We were so happy to host this for them!  It was a beautiful event, and we hope to see everyone here again soon.” 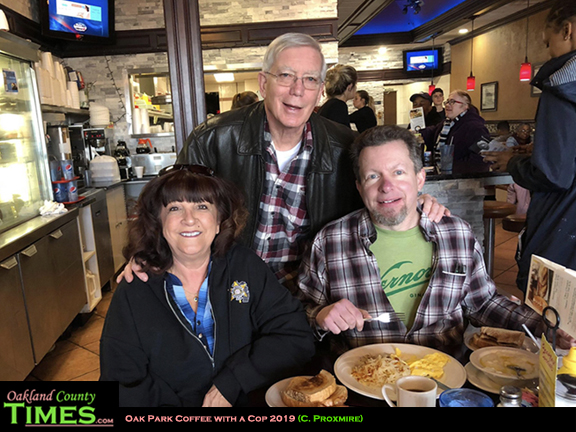 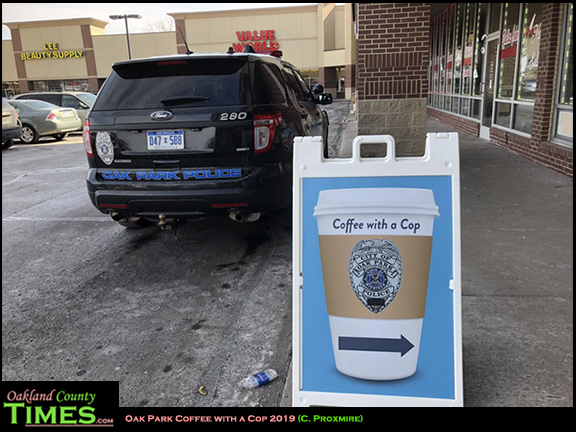 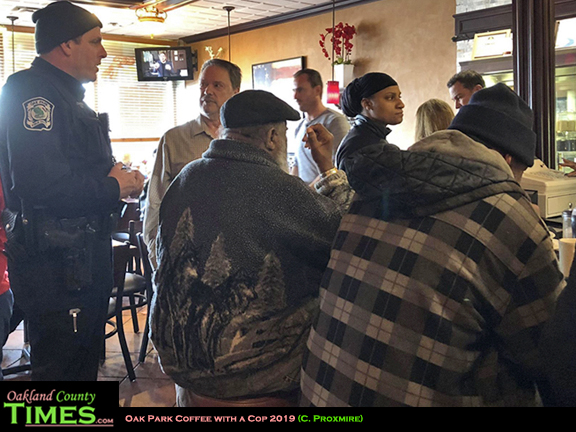 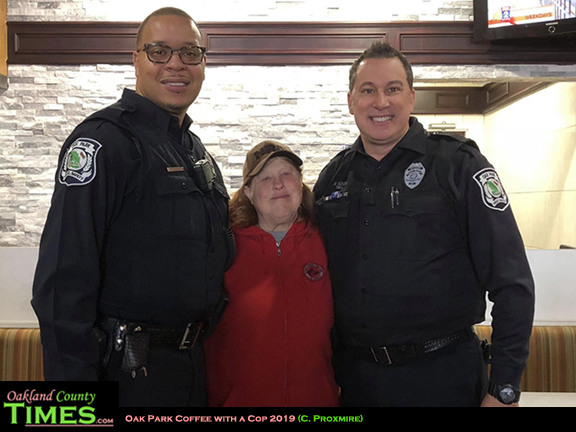 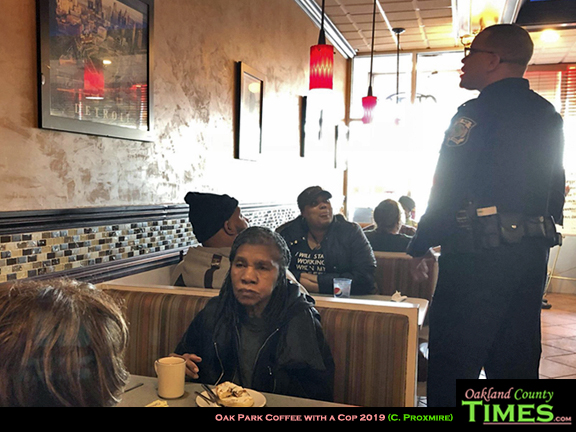 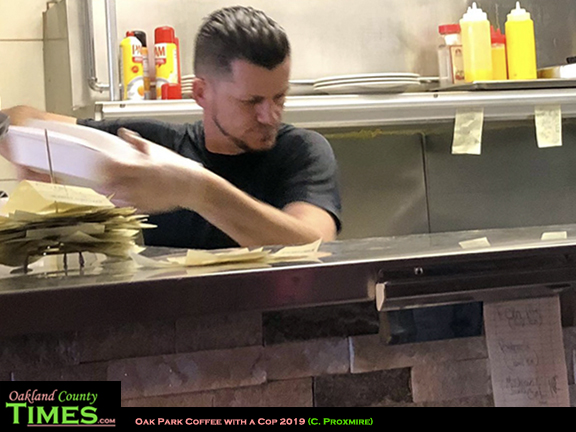 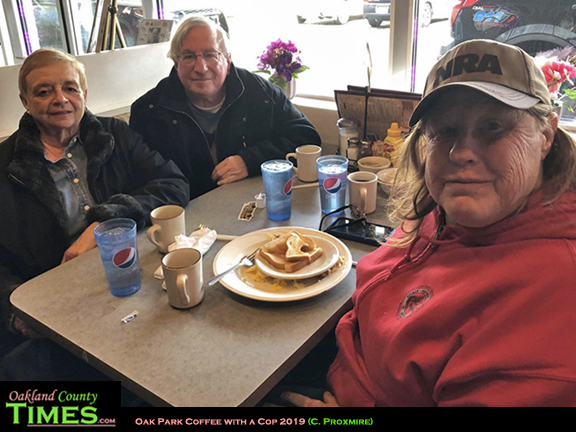 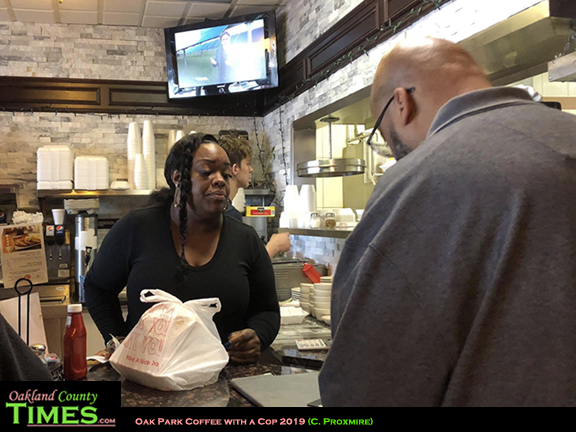 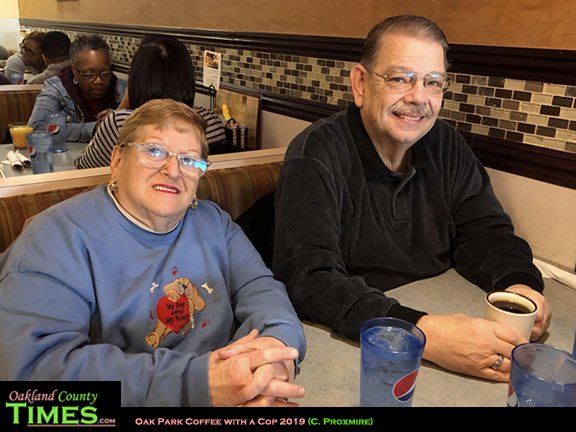 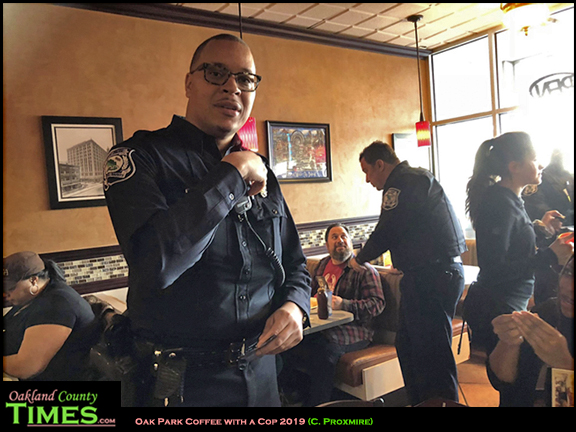 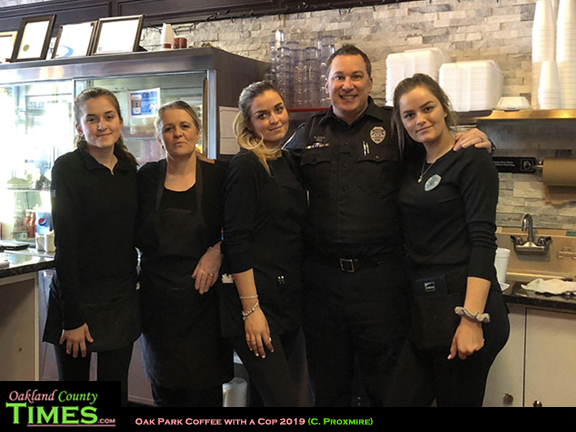 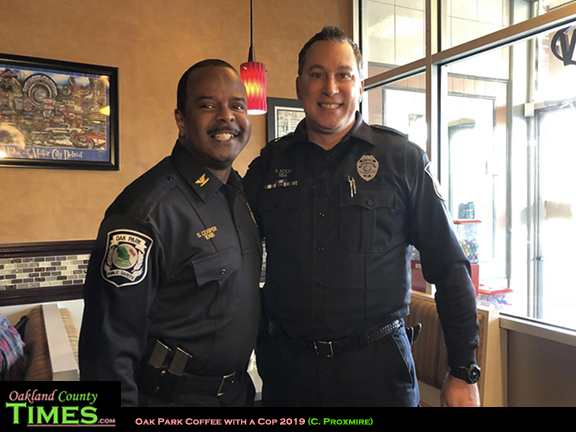 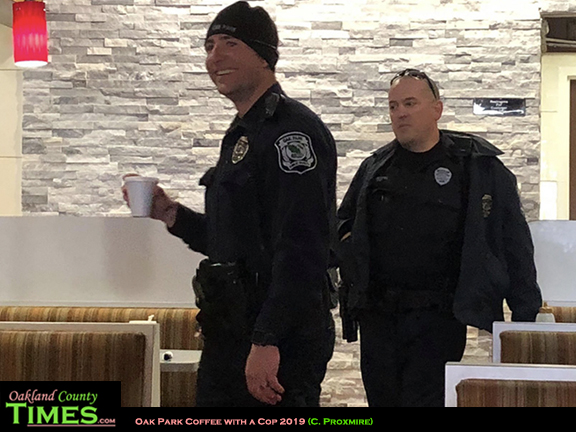 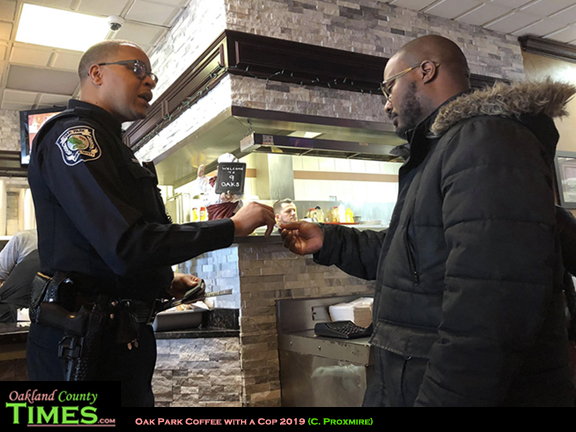