Holly, MI-  Andrew Anderson has a passion for bowling that has made him a national champion.  In 2018 the 23 year old Holly native won the USBC Masters in Syracuse, NY.  He was also named the 2018 Chris Schenkel PBA Player of the Year.  Anderson even traveled to Hong Kong for the World Bowling Tour Men’s Championhips where he won a gold medal in trios with teammates Kyle Troup and E.J. Tackett.
And at a recent Village of Holly Council meeting, his hometown community named a day in his honor.
On Feb. 22, Holly Lanes will be hosting a bowling fundraiser to support Village of Holly Parks.  And officials have decided to make Feb. 22 Andrew Anderson Day.
“The Village of Holly is inspired by Andrew Anderson’s dedication and success with his bowling career,” states the proclamation, which was read by Rick Powers at the

Jan. 8 council meeting.
“It’s important to recognize this young man who is representing Holly,” Powers said.
Anderson graduated from Holly High School and went on to earn a degree in education at Oakland University.  He works at both Holly Lanes and Bowling IQ in Sterling Heights.
Brian Aubuchon owns both alleys, and is proud of his star employee. “Andrew is an exceptional young man both on and off the lanes with tremendous character and integrity. I believe he will be a force to be reckoned with on the PBA tour for a long time,” Aubuchon said.  “There is something special when the TV announcers say his home center ‘Holly Lanes.’ We are very proud of him.”
Aubuchon and the crew at Holly Lanes are also proud to host the Feb. 22 Pins for Parks Fundraiser.  The night will include bowling, pizza, soft drinks, shoes, a raffle and more.  Plus Anderson’s family will be on hand to accept the Village’s proclamation.  Anderson will be on the road that day, but plans are in the works for him to

Skype in.
“As far as the parks fundraiser goes, it’s very important to me that if I can play a small role in helping provide a location in which the community can come together for a great cause, and productively raise funds for things in which all of us can enjoy. Well then it’s my responsibility as a business owner in our community to support such things,” Aubuchon said.  “Holly Lanes will be ready to help our community anytime for any reason! We care about everyone.”
Celebrate Anderson’s successes, and raise money for the parks, on Friday, Feb. 22 at 7pm.  Tickets are $25 and are on sale at the Village of Holly Offices (300 East Street).  Teams of four will be surprised by a local celebrity fifth bowler.
More info: http://oaklandcounty115.com/2018/12/28/pinz-for-our-parks-in-holly-feb-22/ 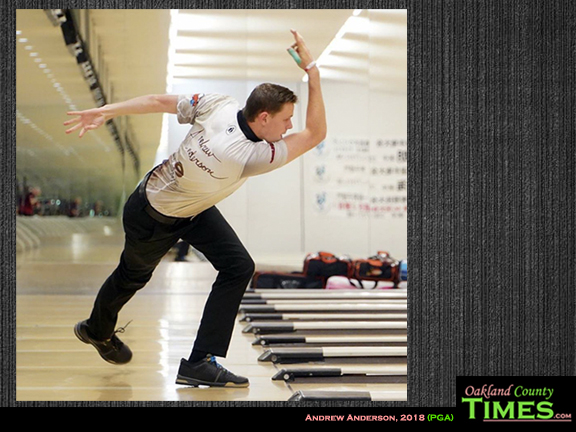