(Birmingham Schools, Jan. 19, 2019)
Wylie E. Groves High School is proud to have welcomed Lieutenant Governor Garlin Gilchrist II on Jan. 16, 2019 as he addressed the student body as keynote speaker at the school’s annual Dr. Martin Luther King, Jr. assembly. The Lieutenant Governor spoke on the topic of “What Would Martin Tweet?” Gilchrist’s topic honored and embodied a connection to the values and qualities identified as important to the staff and students of Wylie E. Groves High School: (G) give back to the community, be (R) respectful and responsible to yourself and others, be (O) open minded as we avoid judgements and stereotypes, value our (E) environment, empower yourself and others to be the change you wish to see, and (S) support each other with empathy. Wylie E. Groves refers to these values as “The Groves Way.”
At the time of the committee’s selection of Lt. Governor Gilchrist, he was the founding Executive Director of the Center for Social Media Responsibility at the University of Michigan. Today’s students are interconnected through social media in ways which

are constantly changing; this connection often is disconnecting, and it was Gilchrist’s belief that “ensurement that people are connected, informed, empowered, and free to share their ideas are core values of the internet” which intrigued the committee.
At Groves “We use this assembly to not only mark the national holiday, but to communicate, educate, and accomplish change,” said Dr. Embekka Roberson, principal. “Our celebration is for all of the Groves community. Dr. Martin Luther King, Jr. stood for more than just civil rights for African-Americans, he stood for the hope that everyone will live, learn, and work together in harmony.”
Groves junior Erin Roberts, who participated as a student ambassador greeting visiting state senators and representatives, also serves on the Microsoft Council for Digital Good. “Lieutenant Governor Garland Gilchrist made me realize the power of social media by asking us how Martin Luther

King would use it,” she said. “That is precisely in line with my work with the Microsoft Council for Digital Good; to make the internet a better and safer place for everyone. The fact that many Michigan legislators participated in the event on Monday gives me hope that they are ready to encourage positive online behaviors. It is imperative that we amplify discussions about making the internet a more productive, civil, and safe place.”
This year’s assembly included:
~A meet-and-greet with State Senators Jeremy Moss and Rosemary Bayer, State Representative Kyra Harris Bolden, the Birmingham Public Schools new superintendent, Mr. Mark Dziatczak,  several Birmingham Board of Education members, and numerous Birmingham Public Schools administrators.
~A performance of “Glory” from the 2014 motion picture Selma by the Wylie E Groves High School Show Choir

~An address of the student body by Principal Dr. Embekka Roberson
~A keynote address by the Lt. Governor Garlin Gilchrist II
~A Call to Service from the Wylie E. Groves Experiential Education Department to engage staff and students in community service projects, making the holiday a Day ON rather than a day off.
~The annual “Faces of Groves” slide show which showcases the diversity and engagement of the Wylie E. Groves student body.
~Student-led introductions of both the Lt. Governor and Dr. Roberson.
The assembly was directed by English teacher Amy J Voigt with support from over 25 staff members and 60 students. 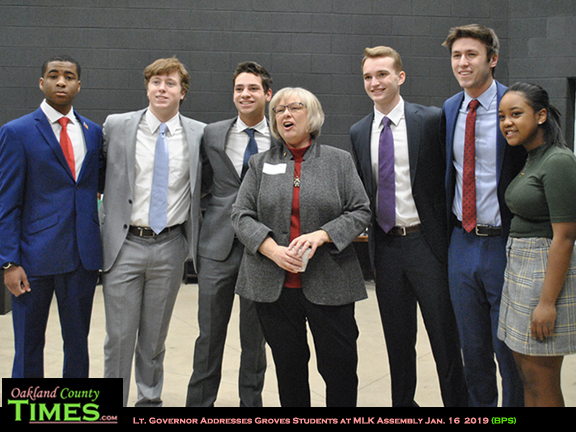 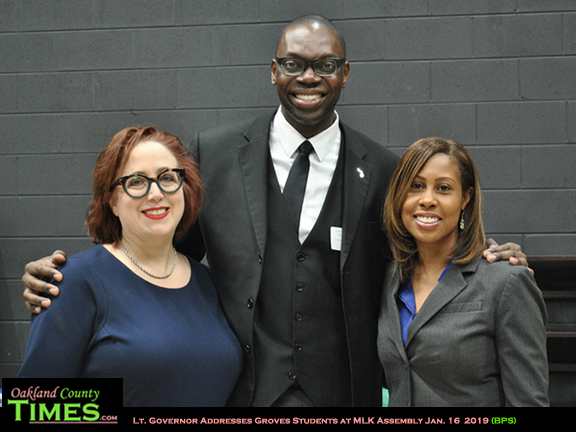 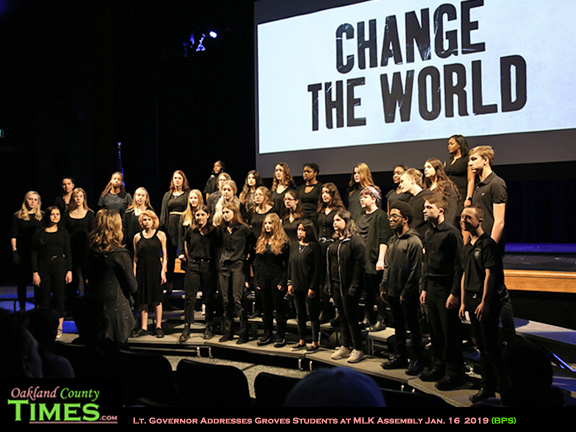 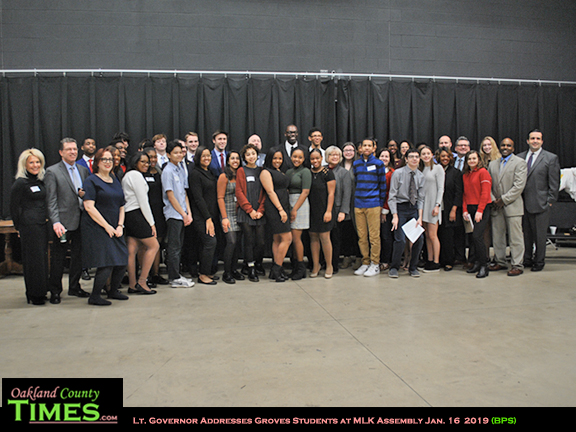 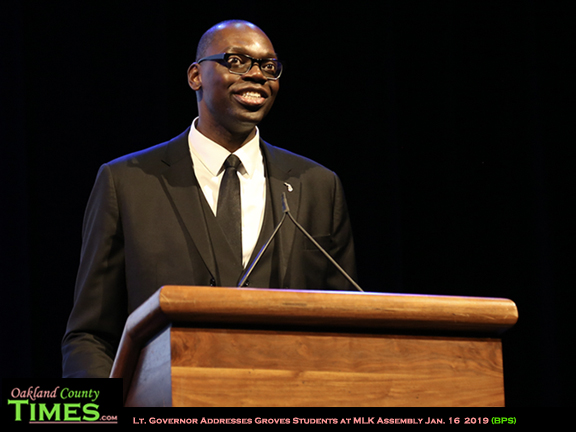