Proxmire, Jan. 16, 2019)
Holly, MI – In the past year, first responders in the 2.2 square mile Village of Holly faced six drug overdoses, including one that resulted in death.
Opioids like heroin, Oxycontin, Vicodin, Percocet, codeine, fentanyl, Lortab, Norco, Darvocet, hydrocodone, methadone, and oxycodone flood the body’s dopamine receptors, causing the body to essentially “forget to breathe.”  As use of these drugs becomes more prevalent, so has the push for making the antidote – Naloxone (aka Narcan) more readily available.
On Tuesday night over 35 residents gathered for a Naloxone training and to receive free samples they can keep on hand in case they encounter someone who is overdosing.  Members of the Village of Holly Police and Fire Departments and the North Oakland County Fire Authority joined the Holly Area Coalition and the Alliance of Coalitions to share their insights and experiences.

STATISTICS
Police Chief Michael Story shared the statistics, including that in Oakland County there were 312 confirmed drug-related fatalities in 2017.  In 2016 there were 165.   In Michigan there were 2,335 overdose deaths.
The average age of the deceased was 42 years old.  Females were approximately one-third of the cases.  And over 80% were white.
A point of optimism was that for the first time in recent years, the number of deaths has decreased.  “We had about 100 less deaths in the last year,” Chief Story said.  “That’s because of the Narcan, and being able to get it into the hands of people like you who can help.”
In Holly, two particularly sad stories stand out.
“In once case we went to the same house three times in one night,” he said. They took a man to the hospital after his first overdose.  They came back later for the man’s girlfriend.  And later after the man was released, he went home

to get high again and had a second overdose.
And in late November or early December rescue workers responded to a home where they revived one person, but then found a second in a back bedroom they hadn’t known was there.  “We did everything we could to revive him, but it was too late,” said Fire Chief Steve McGee.
“This is a crisis,” Chief McGee said.  “This class would not be happening if this was not a big problem, even here in Holly.”
SPOTTING AN OVERDOSE
Sgt. Dennis Sanyo shared the symptoms of a potential overdose, including: pinpoint pupils, shallow breathing or lack of breath, limp body, bluish skin especially on the lips and fingers, gurgling or snorting noises, and nodding off or sleeping.

“When you see this person, they’re going to look dead,” Sgt. Sanyo said.  “That’s the hardest thing for people to push through.  Don’t just call 911 and go in the other room.  They look dead, but they’re not.  You can still help them if you push through that reaction.”
The other most obvious sign of an overdose is the presence of paraphernalia. “People have this instinct to ‘clean up.’  They hide the needle or the pill bottles before the paramedics come,” Sgt. Sanyo said.  “Don’t do that. We need to know what we are dealing with. We aren’t there to judge, at least most of us try not to be.  We want to save that person’s life.  If you hide paraphernalia it may prevent them from getting treatment.”
HOW TO SAVE A LIFE
Naloxone comes in a small nasal applicator.  If a person is passed out due to a suspected overdose, one can place the applicator tip in one nostril and push the dispenser.  They should then do chest compressions to aid respiration and

get the medicine moving into the victim’s lungs.  In rare cases CPR may be needed along with a second dose in the opposite nostril
Revival is typically very quick.  The Naloxone displaces the drug that is blocking the person’s receptors and they become suddenly alert.  They are also likely to vomit and to be agitated or violent.
“When they wake up they are not happy,” Sgt. Sanyo said.  “They are in immediate withdraw. Their high is blown. And they feel horrible and they’re usually mad.”
Administering Naloxone is not enough to save their lives.  It is a temporarily fix, and often a person needs subsequent medicine to stay alive.  Another problem is that when people are revived, they try to get high again but the narcotic does not work immediately. This leads to the most common type of overdose – one following an initial save.
BEING A GOOD SAMARITAN

There are stories out there where someone has tried to help a person in distress, and found themselves the subject of a lawsuit.  Chief Story talked about Michigan’s Good Samaritan Law which is Public Act 307 of 2016.  This shields people from reporting unsafe situations to police, as well as from retribution from good faith efforts to help.
Some in the audience feared that Naloxone itself might be addictive, or harmful if there was something other than an overdose taking place.  Neither is the case.  “It won’t hurt someone, and they won’t get addicted to it. It doesn’t feel good in any way,” Chief McGee said.
Narcan/Naloxone is not a controlled substance, so there are no restrictions in individuals carrying it.  In addition to the Alliance of Coalitions, people can obtain Narcan/Naloxone through a prescription by their physician.
MORE INFORMATION
The Oakland Community Health Network and the Alliance of Coalitions have been working to spread information and samples of Naloxone throughout the County.  Holly is also part of the Hope Not Handcuffs Program, where anyone with an addiction issue can come into the police station and request to be connected with a treatment program.
For more information about Alliance of Coalitions, including how to attend other trainings and get Naloxone, visit their website. 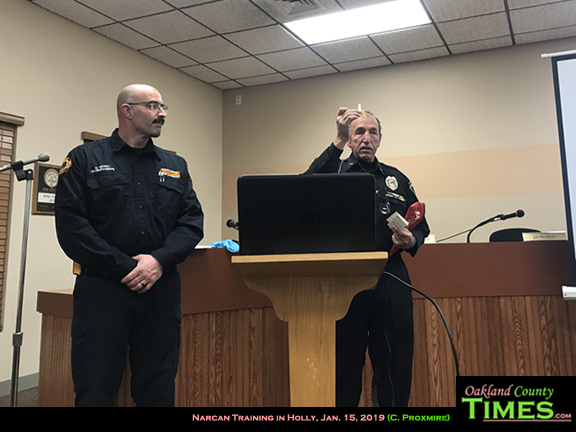 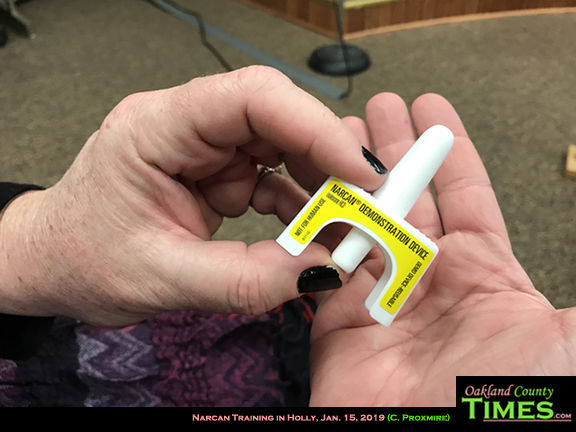 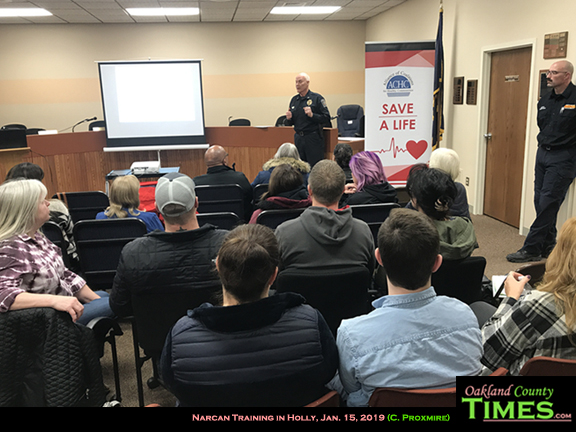 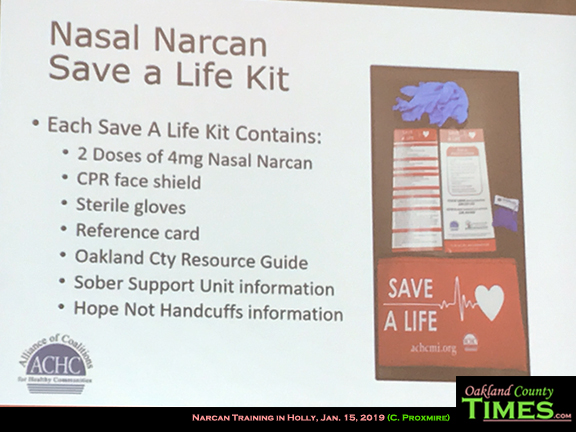 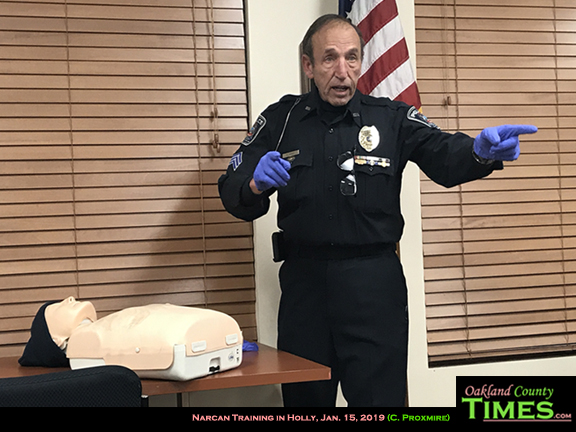