(Lara Mossa, Jan. 12, 2019)
MADISON HEIGHTS – The white short-haired goat came to the window and nibbled on the banana peel. George Barndollar stroked her furry head while he fed her.
This is not an unusual sight for students at Madison High School. For almost two years, goats have graced the courtyard.
“There was a lot of excitement when they came to the building,” said George Barndollar, who is in charge of custodial maintenance.  “The kids were all excited to see them in the courtyard because nothing had really been in there for years.”
Ya Ya, Jasmine and baby Madison have two doghouses for shelter that were built and donated by former students. They roam the grassy area and chew on

leaves while students study and take tests.
The school got the goats in order to recycle expired food from the kitchen, said Barndollar, who takes care of them as part of his duties. In addition, they help maintain the lawn.
Besides hay, they eat bananas, apples, pears, celery, carrots, lettuce and cereal. Students sneak in a few moments when their school work is done or between classes to pet and feed the animals.
“It’s cool to sit by the goats and give them stuff,” said Kyle Scott, 17, a junior. “We look at them as a mascot. They’re cool to be around.”
Barndollar feeds the goats and changes their water every day. He volunteers his own time on the weekends. He combs their hair and trims their hooves once every couple of months.
But his job description doesn’t call for one enormous task he undertook.

The school had two female goats for about three months when one started showing signs of pregnancy. Sure enough, an Armada vet said she was going to have a baby – whether one, two or three they didn’t know.
“It was kind of exciting ‘cause we knew we were getting another one,” Barndollar said. “As big as she got, we thought maybe she’d have two but she only had one.”
On a night in July, 2017, the evening custodian alerted Barndollar that the goat was going into labor. So, he came into work and helped birth the baby.
Barndollar had to pinch the tips off the goat’s udders so the milk would flow and cut the umbilical cord with surgical scissors. For two weeks, he separated the mom and the baby from the other goat. But now they all play together.
“They all play and have fun together,” Barndollar said. “Mom is more laid back than the baby…They run around and chase each other and play head butt.”

Describing them as fainting goats, Barndollar said they don’t like the rain, and they get spooked by the wind. It usually takes two people to chorale them so he can trim their hooves. The mom and baby are more conservative about what they will eat, while the third goat – the baby’s aunt – will eat anything. The aunt – Ya, Ya – is also the most playful and outgoing and the first to run to the windows.
“I love the goats,” said Alyssa Boucher, 17, a senior. “I think they bring a lot of uniqueness to the school.”
Many of the students who are raised in the city have probably never seen a farm animal, said Boucher, who feeds them fruit in the mornings.
“When you see the goats in the courtyard, it’s like a different view for everyone.”

A student from the rival high school – Lamphere – thought it would be cool to use the goats as part of a homecoming proposal. He put a sign around one goat’s head that read “Would you goat with me to homecoming” and the girl accepted, Barndollar relayed.
Although the school mascot is the Eagle, goats will always have a special place their hearts.
Said Lexi Durham, 16, a sophomore, “I like the joy they bring to the school.”
Learn more about Madison High School at http://hs.madisondistrict.org/ 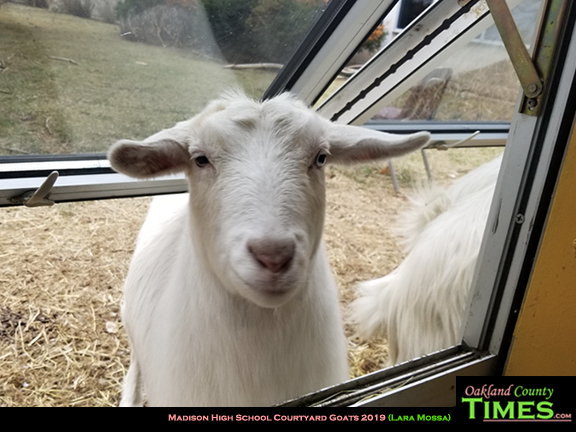 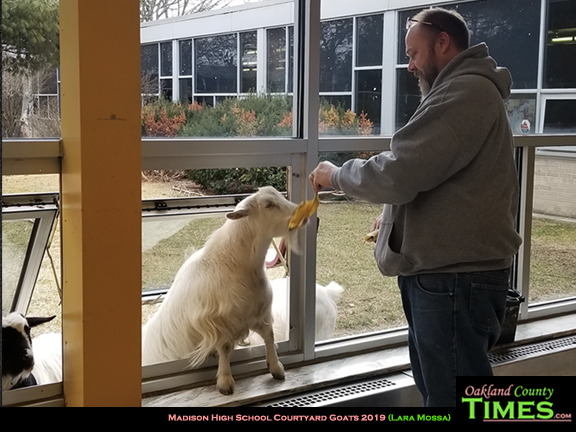 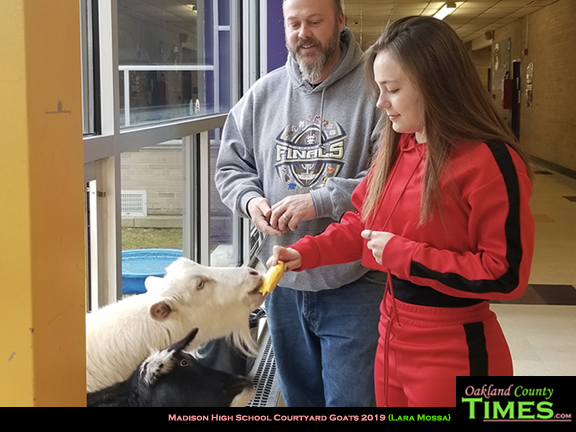 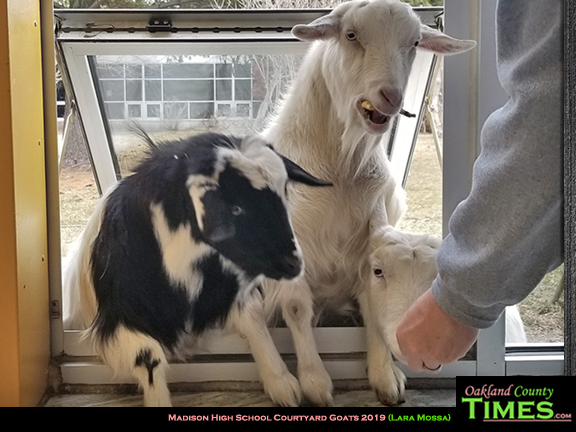 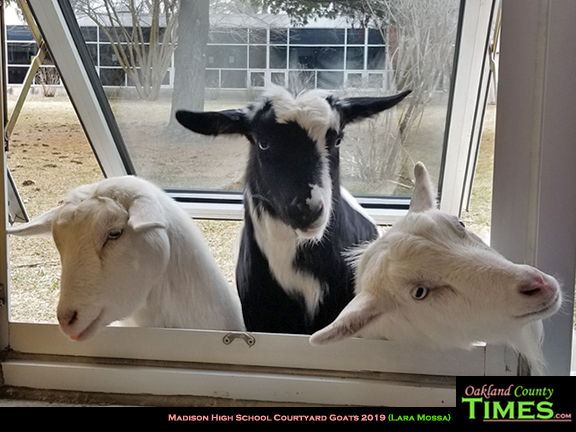