Park
(Crystal A. Proxmire, Dec. 17, 2018)
Ferndale, MI – The process of re-imagining Ferndale Parks continues Monday night at City Council considers approving Phase I plans for Geary Park, located at Pinecrest and Earle Blvd.
If approved, work will begin in 2019 and is expected to be done by fall. Major components include landscaping, a walking path, drinking fountains, benches, trash/recycling bins, grills, a bike rack, a fitness station, and a basketball

court.
The improvements come with a $250,000 price tag.  $166,000 would from the Park Bond Account, with the remainder coming from the 2017 Michigan Department of Natural Resources Trust Fund Grant which is $81,700 from the state and an $84,000 match by the City.  In 2015 votes approved approximately $1.9 million for parks improvements.
The plan requires transplanting three trees and adding 45 new trees.  14 existing trees will be removed that are primarily in fair to poor condition.
Monday’s vote will allow the city to move forward in preparing construction and bid documents to be submitted to Michigan DNR for approval.
In October, planners held a meeting with members of the public, as well

as a meeting with local teens, to hear suggestions on what amenities to add to the park.  Neighbors worried that adding more to the park would increase the amount of noise, with many being critical of the pavilion and the gatherings that happen there. Feedback was mixed about adding features such as a dog run or a skate park.
The long-term Master Plan, to be completed in phases as funding is available, also includes a potential soccer field, a garden walk near the Heroes Memorial Garden, picnic areas, community gathering area that includes a performance area and plaza, and potentially a skate park.
The meeting takes place Monday at 7pm at Ferndale City Hall.
For more information visit the City of Ferndale website. 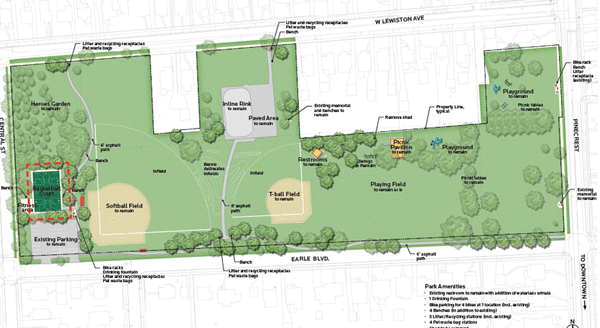