Monetizing Sacred Spaces for Purposes of

Preservation
(Crystal A. Proxmire, Nov. 11, 2018)
Pontiac, MI- In a world where religious engagement is down and many churches face the challenges of aging buildings plus the lure of redevelopment dollars, there is one national organization holding on to hope that sacred spaces can remain active with their intended purpose.
Bob Jaeger co-founded partners for Sacred Places in Philadelphia in 1989, to help save churches, synagogues and other religious places from the wrecking ball.
He came to Oakland County last week as part of the 2018 Heritage Conference. The annual gathering helps city, township, and village planners

learn different aspects of historic preservation. This years’ conference focused on preserving sacred spaces including church buildings and cemeteries.
Jaeger advocates for keeping congregations in their buildings and finding ways to get support from the surrounding community to be able to maintain their buildings rather than succumbing to the temptation to downsize and sell. He shared the reasons as well as ideas to make it happen.
His passion began in the 80s when he saw churches being closed in cities like Chicago, Philadelphia, and Detroit.  In 1989 a battle began between the administrators of St. Bartholomew’s chapel and the City of New York over whether they would be allowed to sell part of their building to be converted into offices.  While the congregation would have benefited from the sale, and

there was a need for more office space, the City stepped in and prevented it because the church was an historic landmark.
“It was hard because the preservationists were at odds with the parishioners.  The parishioners didn’t see a way to make it work,” he said.  “The Supreme Court upheld the designation and they couldn’t develop it.  Now, all these years later, it remains a beautiful part of the city, a landmark that people come from all over the world to visit.”
Telling people about the groups and services may help neighbors have a better appreciation for the building and its impact on the broader community.  “It’s called the ‘halo’ effect,” Jaeger said. The halo effect is not only the good

feelings that come from having a sacred space, but also the economic impact the area.  “Someone comes to a service or a meeting, maybe they go to lunch after, go shopping,” he said.
But there is also the halo effect that some may not think of.  “How do you attach an economic value to social services?” he said.  “What if you help someone get a job? What if you help someone get off drugs?  What if you help a married couple stay together?  What if a pastor counsels someone and convinces them not to commit suicide?”
Speaking in terms of value helps people appreciate the asset that is there.
“We have to think of these as civic place, not just sacred places,” Jaeger said. “This building is not just for the congregation, it’s for the community.”

Many of the services provided in places of worship are not the worship itself.
Jaeger cited a study of churches and synagogues across the county, of all sizes, styles, ages etc.  The study showed that 93% of faith buildings are open during the week for activities other than worship service, and that 81% of people using those spaces are not members of the congregation.
Some of the more common uses include food pantries, clothes closets, meeting space for groups like Alcoholics Anonymous and other support groups, schools, daycare facilities, concerts, seminars, counseling, weddings and funerals.
In terms of bringing in revenue to repair and maintain aging buildings, Jaeger suggested finding new uses for the space.  Options include adding fitness

centers, renting out gymnasiums, offering office space to nonprofits and people who work from home, allowing catering companies to use the commercial kitchen, charging for meeting space, renting space to schools and daycare facilities, renting space to dance studios, hosting conferences and workshops, charging for certain types of services such as counseling.
When asked about the line between for profit businesses (which pay taxes and require licensing), and functions of the church, Jaeger said “it’s really up to the local officials and how they enforce. We encourage municipalities to be flexible.”  He explained the importance of good relationships and being able to speak about places of worship in terms of the value they have to the communities they are in.
Commercialization of church buildings and activities is not the only way congregations can raise money.  Jaeger suggested doing a capital campaign

where parishioners can go to the surrounding community for donations.  Partners for Sacred Places offers resources for congregations seeking to fundraise. He said that fundraising for building needs can be hard.  “Why invest in your building when there is so much need in the world?” is a question that often comes up as congregations consider their options. Yet the building is often an essential part of the church’s story, and a good focal point for fundraising, he said.
Jaeger recommends speaking in terms of value and being a community asset. “Let’s not talk about how big we were in 1963 or 1952, let’s talk about what we have now,” he said.
“When you talk about economic value,” elected officials listen,” Jaeger said. “A lot of local governments view churches as a negative. They don’t pay taxes. They may not like the lines for the soup kitchen.” The answer, he said, is to focus on the benefits to the community, including 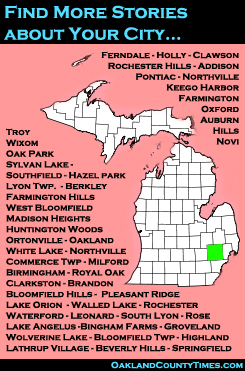 the halo effect.
The presentation was attended by planners, administrators, officials, and DDAs from all over Oakland County. Many wanted to know about projects that adapt the historic buildings for more modern uses. For example, across the county and even in Oakland County, there are restaurants, community centers, artists markets, senior living facilities, schools, and apartments that have grown into spaces no longer needed by the congregations.
“This condo-ization of churches is a recent trend,” he said when asked about adaptive reuse.  “It’s hard to change the purpose of a building and not change its character. They tend to get rid of the sanctuaries, the gathering spaces.”  He said that his group will consult with developers about historic preservation during renovations, but their priority is encouraging congregations to stay.
Learn more:
Partners for Sacred Places
Oakland County Historical Commission