(Cheryl Weiss, Nov. 1, 2018)
Oak Park, MI- Little Captain Americas, unicorns, and zombies waited patiently in the sunny Halloween afternoon for the Oak Park Boo Bash to begin.  They explored the creepy décor outside, from the Oak Park Cemetery complete with a tombstone labeled “Waiting For You” and random body parts, to the trio of skeletons enjoying a campfire, to the gathering of witches around a cauldron.  There were huge happy and scary inflatables; a smiling Jack o’lantern, grinning ghosts, and a big black cat.  Everyone was in a holiday mood, ready to collect candy and enjoy cider and donuts at the end of the Boo Bash.
“I’m excited for the candy!” twelve year old Amariyana Taylor said.  Seven year old Angel Compton was with Taylor, but she was looking forward to more than candy.  “I’m excited for the costumes!” she said.  Da’Naja QAuilter, 17

years old, agreed.  ‘I want to see what everyone looks like,” she added.  Their mom, Kisha Murriel, shared that she was excited too.  “We come to this every year,” she said.  They are Oak Park residents, and this is one of the community events they all look forward to.  By 5:00 p.m., when the doors opened, the line snaked around to the end of the sidewalk by the Community Center and continued to grow.
When kids and their adults entered, they visited an area with huge spider with glowing eyes, an angry-looking black cat with large claws and yellow eyes that lit up, and a few trick-or-treat tables with candy for the kids.  As they continued down the hallway, with many volunteers stationed to guide them along, they passed a giant gorilla in jail, who roared and reached out for people as they passed by.  A haunted house inflatable with ghosts flowing out of the windows was a perfect spot for photos.  Next was a dimly lit hallway

with holiday lights across the ceiling, and numerous huge spiders lurking on the walls and ceiling above.  The interior of the large activity rooms was lit purple, and trick-or-treaters made their way from table to table, each sponsored by a local business or organization.  Tori Webster, of the Best Friends Child Care Center in Oak Park, greeted families to her table with a big smile.  “This is an awesome way for us to connect with the community,” she said.
The lines kept moving steadily and smoothly, with a small group of people admitted at a time to keep the large crowd manageable. Volunteers ranged from teenagers to senior citizens, all choosing to spend Halloween serving the community and helping to create a special event for all.
Arie Anderson is a sophomore at Oak Park High School, and she was stationed at the end of the trick-or-treat route, directing guests to the cider

and donut area.  “I like to volunteer,” she said.  “It helps with community service, I get credit for it.”  But it’s more than that.  She went on to add, “I always wanted to join a club and be part of stuff.”  By volunteering, she is a part of a group of people like her, who are invested in their community and do their part to make it even better.
Back in line, Rose and Noel Busque chatted for a moment while they waited with their son, four year-old Henry.  “We really love Halloween, and we want to support the City. We came last year too, Busque said.”
Costumes varied, from adorable animals and cartoon characters to scary monster masks, and everything in between.  Except clowns.  Recently, a story by the Oakland County Times about Oak Park’s ban on clown costumes at the Boo Bash made national and world news.  After that story went viral, pressure from the community resulted in their decision being reversed and the ban on 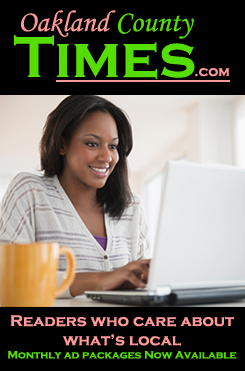 clown costumes was lifted. The City said clown costumes are welcome at Boo Bash 2018 after all.  Few, if any Boo Bash guests took the City up on the invitation, however, with one notable exception: Mayor Marian McClellan.   Sporting a clown nose, bright red makeup, a black beret, and a vividly colored scarf, McClellan made light of the earlier controversy.
Cider and donuts were served at the end of the trick-or-treat trail, and some families talked excitedly about going trick-or-treating in their neighborhoods after they left. It was a fun, memorable event for the youngsters and the young at heart.
For more community events, visit the Oakland County Times Event Page.