MML#2 – Pittsburgh, Indianapolis and Copenhagen – Examples of Revitalization Through Localism

MML#2 – Pittsburgh, Indianapolis and Copenhagen – Examples of Revitalization Through

Localism
(Crystal A. Proxmire, Oct. 7, 2018)
Grand Rapids, MI- What can communities learn from the revitalization of places like Pittsburg, Indianapolis, and Copenhagen?
Bruce Katz, author of The New Localism: How Cities Can Thrive in the Age of Populism was the keynote speaker at a luncheon of over 1,000 elected officials, city administrators, and planners at the recent Michigan Municipal League (MML)/ Michigan Association of Planning Annual Convention held in Grand Rapids.  There he encouraged attendees to think of what their community assets are.

What’s your edge? Who’s in charge? Where’s your power?
These questions can help communities thrive in strategic ways, without trying to be something they are not, and without waiting for outside help.
“Cities and metropolises are now the most relevant governments,” Katz said.  “Democracy is practiced every day in ongoing ways.”
By embracing new technologies and new ways of connecting people, communities can thrive.  He shared three examples that embraced similar principles, yet blossomed in their own unique ways.
Pittsburgh, PA
In the 1970s Pittsburgh was fraught with pollution and devastation after the downfall of the

steel industry.  A major nuclear reactor coolant spill at Three Mile Island led to a cleanup effort that took over a dozen years, further tarnishing the area’s atmosphere and reputation. Blight, crime, and abandoned areas of the city made Pittsburgh seem hopeless as a destination area.
Yet community leaders came together and made important decisions.  The most important, Katz said, was accepting the reality that the past was gone.  “Instead of saying ‘we’ve got to get the steel industry back,’ they said ‘we’ve got to build our future.”
They looked at what assets they had, including several Universities within a close area.  Because of those Universities there were a number of technology firms.
By looking at the assets already in place, Pittsburgh put their efforts into being a central location

for advanced technologies, including automation, advanced robotics, autonomous vehicles, 3D printing, and genomics and bio-technologies.  Now instead of getting their education and moving out of state, students have opportunities to thrive in a city that is vibrant and healthy.
“If you’ve been to Pittsburgh lately, you feel like you’re in a playground of innovation,” Katz said.  “They were betting on technologies we didn’t even have names for yet, and it paid off.”
“GE, Google, and Uber are in Pittsburgh.  They’re not in Pittsburgh because they want free stuff, they’re in Pittsburgh because they need to be near that secret sauce,” he said.
Getting there took focused intention and direction.  Katz quoted a Pittsburgh planner named

Matthew Taylor, stating “A city must think like a system and act like an entrepreneur.”
Katz added “Acting like an entrepreneur means taking risks.”  By taking risks Pittsburgh supported technology entrepreneurship, created an environment of creativity with a technological theme, and brought leaders in technology together to help in the crafting of a community where innovation could thrive and where technology-minded people would want to live.
By doing this, “Pittsburgh moved from Rust Belt to Brain Belt,” Katz said.
Indianapolis, IN
Former Indianapolis Mayor William H. Hudnut III said that in the 1970s “Downtown Indianapolis had become so desolate that men armed with shotguns hunted pigeons on Sundays

among empty buildings and a trash-strewn canal.”  His goal was to change that, and he did.
After evaluating the assets of the community, they decided to become the amateur sports capital of the Midwest. It was a goal on no one else’s radar, and one that would give them a steady stream of revenue from visitors, and steady support for their service industries.
They got their major corporations and nonprofits together and formed the Indiana Sports Corporation.
“They built a bunch of stadiums and began stealing teams,” Katz said.
The Corporation helped get all the stakeholders focused on this goal, and helped guide foundational giving and philanthropy into sports as an investment for the community.  They vigorous sought out sports related organizations and encouraged

them to be part of the Indianapolis sports vibe. The more that came, the greater the buzz, the greater the buzz, the easier it was to attract more.
They are now home to the Indianapolis Colts (NFL), Indiana Pacers (NBA) Indiana Fever (WNBA), Indianapolis Bandits (GWBA), Indianapolis Indians, Indy Eleven, Indy Fuel,  Indianapolis Intensity, as well as many college level sports teams.  Indianapolis wooed the National Collegiate Athletic Association and the National Federation of State High School Associations.  Because of these affiliations they also host many major sports events including NCAA Championships, Big Ten Basketball Tournament, Big Ten Football Championships, Tennis Championships, motorsports, all-star games of various types, and even sports like cricket and hurling have a home in Indianapolis.
After solidifying their stance as the home for all things sports related, city leaders decided to take the same strategy of build and steal to the biotech industry.  They created an atmosphere for drug research, medical devices, and life science products to thrive.  Mirroring the Indiana Sports

Corporation, they created the Central Indiana Corporate Partnership (CICP).  The group leverage millions in funding from various sources and invested in attracting biotech companies and helping biotech entrepreneurs grow.
One lesson in all of this collaboration, Katz said, was to “be an eco-system rather than an ego-system.”  While not everyone in Indianapolis may like sports or feel passionate about medical devices and drug research, appreciating the big picture and collaborating on those goals was what uplifted the community.  Through CICP, there are 60 CEOs making decisions about where the bulk of philanthropic money in the community goes. This solidarity is what helped bring Pittsburgh back, and what has helps it continue to grow.
Copenhagen, Denmark
In the 1980s Copenhagen faced 17.5% unemployment and a $750 million deficit.  In the 1990s

leaders from the two major political parties agreed to work together on a plan to save the city. Their plan was to build the best public transit system without taxing the residents.
They began by assessing the public wealth, looking at what land and buildings they owned.  Among these assets was Vast Harbor, a municipally owned trading harbor.  They decided that leveraging the property with public private partnerships would be the way to fund the infrastructure improvements needed in the city.
They created the Copenhagen City Development Corporation, a public group with a board to help oversee professional management of community assets.
“There was one rule – all profits went for one purpose, to service the debt on the transit

system,” Katz said.
He explained that by having one goal and one clear responsibility, it created a strong sense of accountability.  “If we cut corners here, if we did a favor here, we won’t get to that end game,” he said.
Jens Kramer Mikkelsen, former Mayor of Copenhagen, was quoted as saying “We are not here for a quick fix.  We are here for the long haul.”
This focused goal and collaboration have led to a revival of the city. The docks are become a major shipping hub again, unemployment declined, and a culture of bicycling and transit has led to reduced pollution, healthier residents, and more human interaction among the neighbors that call Copenhagen home.  But it would not have been possible without the 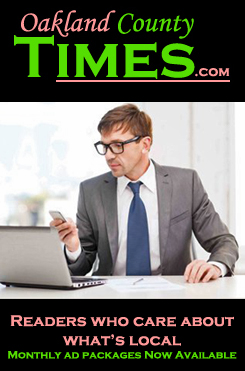 foresight and cooperation of the stakeholders in the community.
Lessons to Take Home
Katz urged the community leaders in the room to look at their own hometowns and consider what could be accomplished with a shared sense of purpose and a strategically leveraging what assets are there.
His book, The New Localism, provides more information on how cities can do this. Learn more at https://www.brookings.edu/book/the-new-localism/
This article is a series based on presentations from the Michigan Municipal League (MML)/ Michigan Association of Planning Annual Convention held in Grand Rapids, MI Sept. 20-22, 2018.  For more MML-related stories click here.  For more on the Michigan Municipal League, visit their website http://www.mml.org. 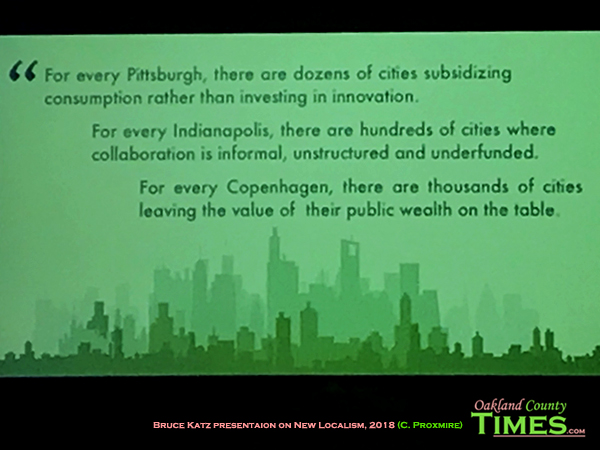 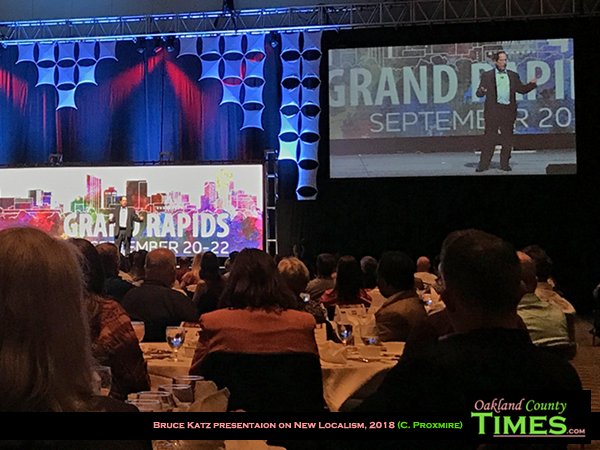