10, 2018)
Lathrup Village, MI- Lathrup Village Councilperson Donna Stallings urged women to be “BOLD.”
“Bend but don’t break. Own our power. Be a Legacy Leader. And Dominate whatever your calling is,” she said.
Stallings was part of a luncheon panel on Friday of distinguished female elected officials. The panel was moderated by journalist Karen Dumas and also featured Lathrup Village Mayor Kelly Garrett, County Commissioner Nancy Quarels, and Pontiac School Board President Brenda Carter. The women shared stories from their own journeys, as well as wisdom for the other women in the room.
“Like many women it wasn’t something I set out to do,” Quarles said of her public service.

“Unfortunately with women we have to be asked more than once.”
Quarles had volunteered for a campaign, but could not imagine being in the spotlight herself. When the previous County Commissioner decided not to run again, it took several people asking before Quarles even considered it.
“My biggest obstacle is me,” she said.  “I get mad at myself.  I think, I’m not doing this right, or that I can’t do it,” Quarles said.  “Something my mother used to tell me stuck with me. ‘There’s a lot of things that can stop you, so stop stopping yourself.’ I had to understand that.”
Carter had a similar challenge.  “The only person that doesn’t believe in me, is me,” she said.
“I can’t believe how many women think that.  No matter what you accomplish, you still have the voice in your head that says you can’t do

it.  You’re not good enough. That’s one of the first barriers we need to overcome,” Carter said.
Supporting each other was also a common theme of the discussion.
“As women we need to help women and not be a hindrance… It’s not going to hurt you to help someone else,” Garrett said.  “Let women know, I’m here for you.”
Dumas opened the luncheon by having members of the audience nod to their neighbors.  “When men pass each other in the street, what do they do? They nod.  They acknowledge each other,” she said.
The panelists also spoke about finding opportunities to uplift others.  Carter’s calling was to help youth in Pontiac.  Carter lost her mother at a young age and grew up in 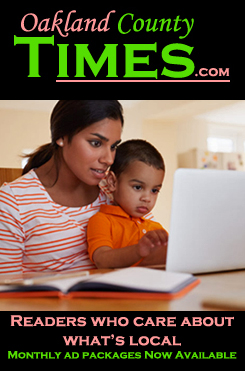 poverty. When she was young she dreamed of exploring far off lands, and as an adult she was delighted to help send a group of eleven 13-year-olds on a two week trip to study in Japan.
She also fights in Pontiac and at the state level for better access to education. “The system is totally inequitable and it gets worse every day,” Carter said.  “There is nothing wrong with the children of Pontiac. They just need an opportunity.”
Stallings also sees the value of helping.  “When we have platforms, they aren’t there for us to gloat, but to lift up others,” she said.
Garrett agreed. “Leadership means taking a back seat and letting someone else shine,” she said.  “Being Mayor is not about me, it’s about putting Lathrup Village on the map.”
The discussion was part of Lathrup Village’s 65th birthday celebration which took place all weekend.  Lathrup Village is a city of about 4,000 people, surrounded by the City of Southfield.  It was founded by developer Louise Lathrup Kelley who envisioned a community with high standards of construction and public services. It was founded in 1923.  Kelley resisted pressure to become part of Southfield, and in 1953 Lathrup Village became incorporated at The City of Lathrup Village.  Learn more about Lathrup Village at http://www.lathrupvillage.org/.